A monumental new glass, steel and bronze sculpture by leading contemporary artists Doug and Mike Starn has been placed on the lawn of the Princeton University Art Museum.

The newly commissioned work, weighing nearly eight tons, is constructed of six 18-foot-tall vividly colored glass panels — featuring a new glass-dyeing technique pioneered in Germany — and two cast bronze forms resembling tree limbs. Titled "(Any) Body Oddly Propped," it was designed by the Starns specifically for the site and continues the artists' long fascination with energy systems found in nature. A rich addition to Princeton's arboretum-like campus, the sculpture is only the second glass piece the artists have created since their first permanently installed public artwork, "See it split, see it change," made for the New York City Metropolitan Transit Authority in 2009.

"Doug and Mike Starn have collaborated to create some of the most significant works of public art in a generation, and this new piece is expressive and purely beautiful, inviting visitors to linger amidst the sculpture and experience it under constantly shifting light conditions," said James Steward, the Nancy A. Nasher–David J. Haemisegger, Class of 1976, Director of the Princeton University Art Museum. "This new work represents a thrilling direction in Doug and Mike's work and deepens the visual experience of this gorgeous campus."

This new commission joins Princeton's landmark collection of public art and was made possible by the generosity of Shelly Belfer Malkin, Class of 1986, and Anthony Malkin, and by the John B. Putnam Jr. Memorial Fund.

Over the final weeks of summer, the sculpture "(Any) Body Oddly Propped," by Doug and Mike Starn, was installed in front of the Princeton University Art Museum. This time-lapse video shows the site as the steel beams, glass panels and bronze forms come together. (Video by Danielle Alio, Office of Communications)

Related to Pablo Picasso's late sculptures, in which the artist stood two flat images together, the Starns' piece also may be read as the walls of an outdoor stained-glass chapel propped together, inviting the visitor to walk among the panels. The enlarged arboreal images and the interdependence of the richly hued glass panels lend mood to the structure that is at once animated and evanescent, while the sheer scale and weight of the massive panels create a profound sense of rootedness.

The artists will discuss the work with Steward at an event at 4 p.m. Saturday, Oct. 24, in McCosh Hall, Room 50.

Identical twins born in New Jersey in 1961 and based in Beacon, New York, Doug and Mike Starn first gained international recognition at the 1987 Whitney Biennial and have received numerous honors and critical acclaim ever since. Their investigations at the intersection of light and science have led them to defy categorization, combining media such as photography, painting, sculpture, architecture and installation, most notably in the series "Big Bambú." Widely exhibited, the Starns' work is represented in major museums and private collections worldwide, including the Museum of Modern Art, the San Francisco Museum of Modern Art, the Solomon R. Guggenheim Museum, the Jewish Museum (New York), the Metropolitan Museum of Art, Moderna Museet (Stockholm), the National Gallery of Victoria (Melbourne), the Whitney Museum of American Art, the Yokohama Museum of Art, La Bibliothèque Nationale de France (Paris); La Maison Européenne de la Photographie (Paris) and the Los Angeles County Museum of Art, among many others. 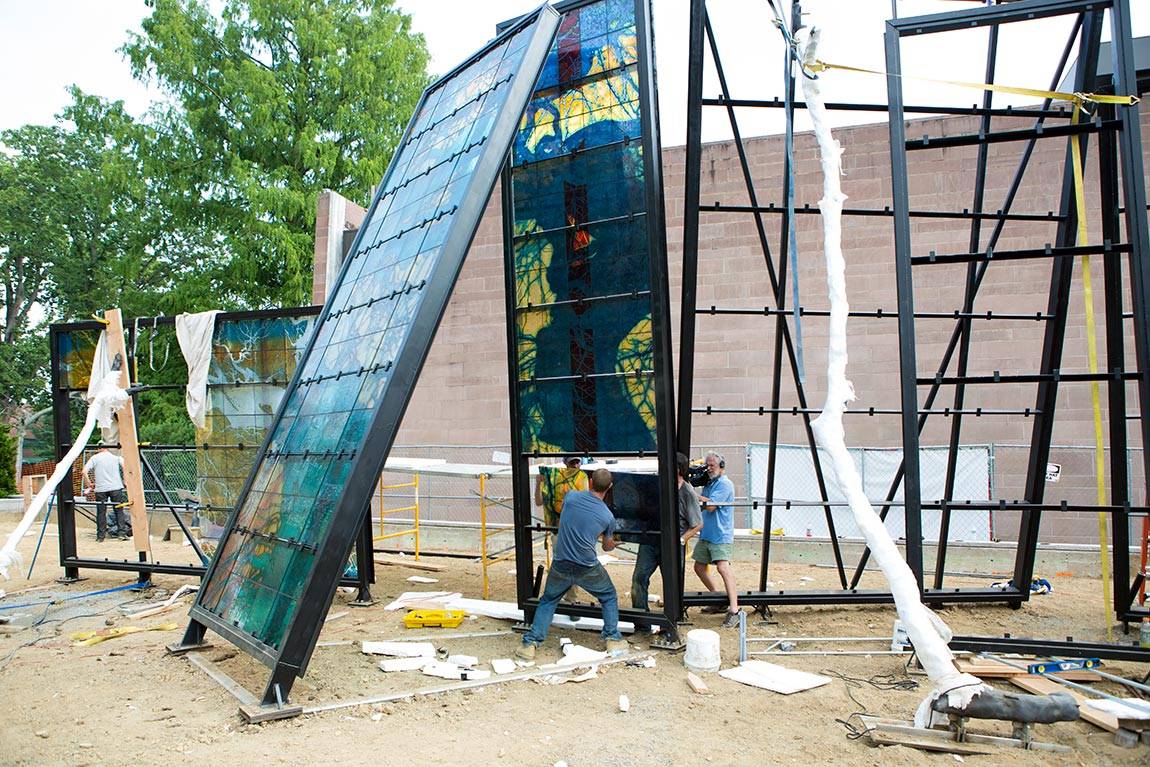 Workers piece together "(Any) Body Oddly Propped" on the front lawn of the Princeton University Art Museum. (Photo by Denise Applewhite, Office of Communications)

The glass panels were fabricated by Franz Mayer of Munich Inc., a family-run glass studio founded in 1847 that is dedicated to contemporary art and architectural glass and mosaics as well as to historic preservation.

The museum's front lawn has been home to a number of compelling works of art, from Picasso's "Head of a Woman" to Magdalena Abakanowicz's "Big Figures," and such short-term installations as Doug Aitken's "migration (empire)" and, most recently, two sculptures by Alexander Calder. 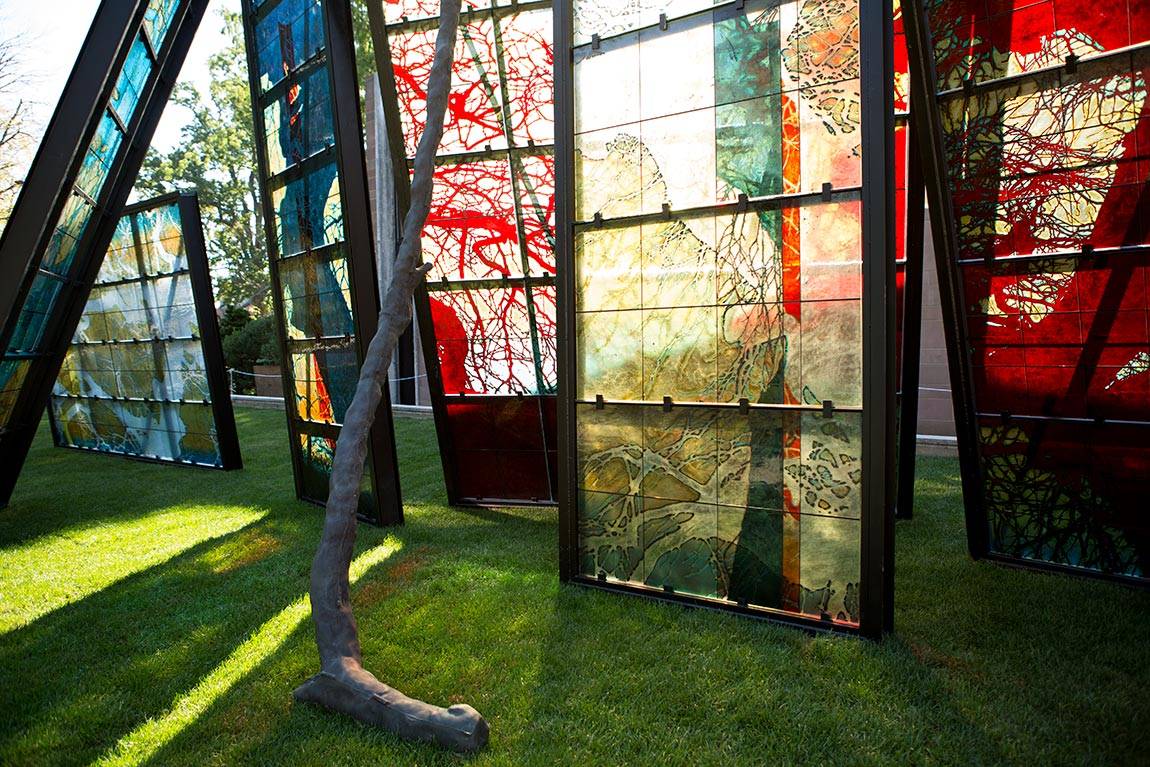 Light filters through the stained glass, casting shadows against the ground and one of the sculpture's cast bronze forms. (Photo by Denise Applewhite, Office of Communications)

A campus art initiative — launched in 2008 to expand the University's existing collection of historical campus art with commissions by living artists — is undertaking numerous commissions and loans and has brought to campus works by artists such as Kendall Buster, Jim Isermann, Sol LeWitt, Odili Donald Odita and Beverly Pepper. It will be joined in the fall by a commission by Ursula von Rydingsvard.

With a collecting history that extends back to the 1750s, the Princeton University Art Museum is one of the leading university art museums in the country, with collections that have grown to include over 92,000 works of art ranging from ancient to contemporary art and spanning the globe. While advancing Princeton's teaching and research missions, the museum also serves as a gateway to the University for visitors from around the world. 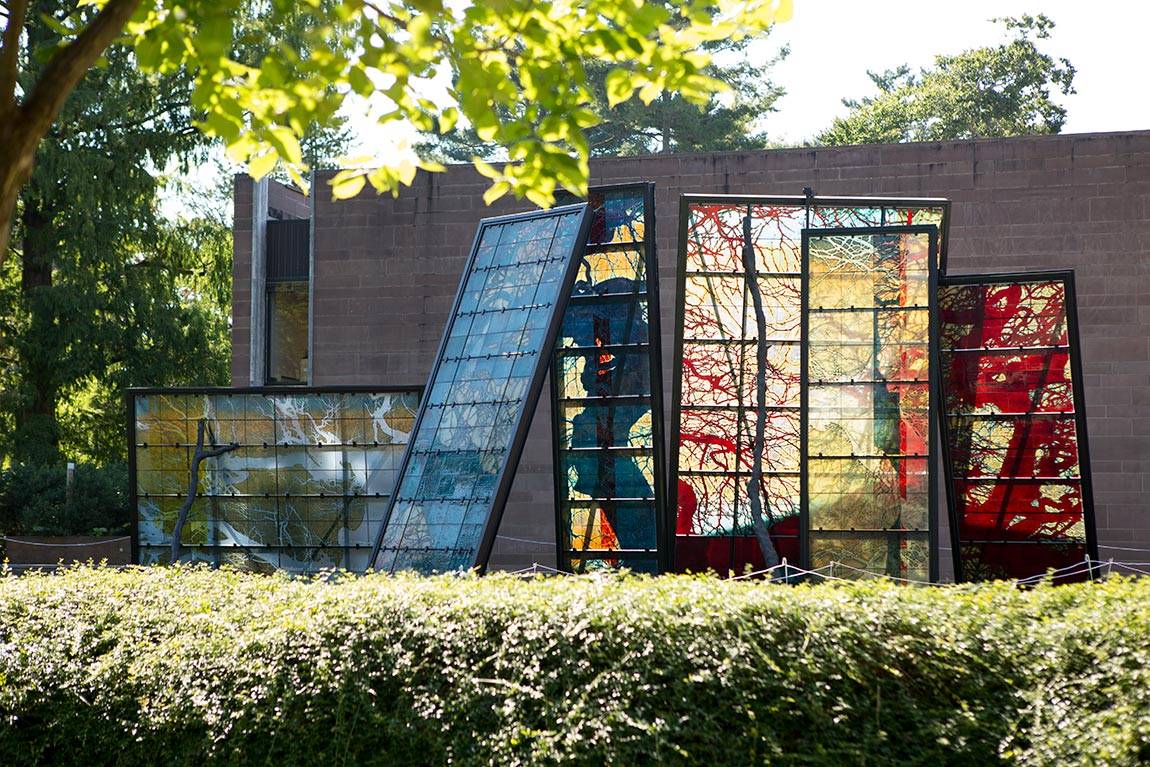 The Starn brothers' sculpture resides on the front lawn of the Princeton University Art Museum. The museum's front lawn has been home to a number of compelling works of art, from Picasso's "Head of a Woman" to Magdalena Abakanowicz's "Big Figures," and such short-term installations as Doug Aitken's "migration (empire)" and, most recently, two sculptures by Alexander Calder. (Photo by Denise Applewhite, Office of Communications)

Time-lapse of the installation of "(Any) Body Oddly Propped"