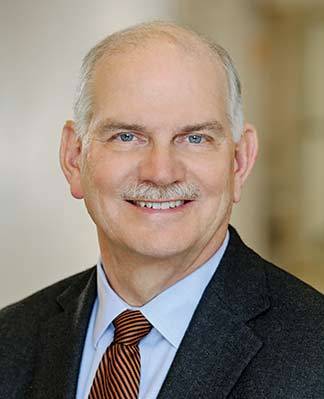 H. Vincent Poor, dean of the School of Engineering and Applied Science at Princeton University for the past nine years and a leader in the field of wireless communications, will step down as the school's eighth dean at the end of the next academic year, June 30, 2016.

President Christopher L. Eisgruber has appointed Pablo Debenedetti, dean for research and the Class of 1950 Professor in Engineering and Applied Science, to chair a committee to identify a successor to the position, with the expectation of having the new dean in place by July 1, 2016.

"Vince Poor has been a marvelous dean and has led the engineering school through an extraordinary period of growth," Eisgruber said. "Not only are record numbers of students majoring in engineering, but students across campus are engaging with the school to broaden their intellectual development and enhance their potential to make a positive difference in our world.

"The engineering faculty has never been stronger or better aligned in a shared vision for serving society through research and teaching, and the school's graduate students are outstanding," Eisgruber added. "Vince's dedicated and visionary leadership has helped to make Princeton's School of Engineering and Applied Science an internationally admired model for how a first-rate engineering school enhances the mission of a liberal arts university."

Former University President Shirley M. Tilghman appointed Poor to a five-year term as dean in 2006 and re-appointed him to a second term in 2011. During that time, the school has seen nearly a 60 percent increase in undergraduate majors, who now comprise a quarter of the Princeton undergraduate student body. There has also been a 115 percent increase in the number of students enrolled in engineering school courses, reflecting an increasingly broad interest across campus.

At the same time, the faculty of the school has grown by 12 percent while achieving a 45 percent increase in the amount of sponsored research funding it attracts, which accounts for approximately 40 percent of all on-campus research spending at Princeton.

"It has been a great privilege and honor to serve as dean," Poor said. "I am very proud of all that we've accomplished as a school. The faculty, staff, students, alumni and leadership both within the school and at the University level, have all been wonderfully supportive. Our successes have relied critically on contributions from all those groups, and the strengths of these stakeholders are what makes Princeton Engineering a very special place."

Poor added that, with the school pursuing an intensive strategic planning effort as part of the University's overall planning process, the next year will be a good time for a new dean to begin building on those efforts. "I love the job and will miss working with so many remarkable people, but am also looking forward to returning to fulltime teaching and research," said Poor, who is the Michael Henry Strater University Professor of Electrical Engineering. "I will enjoy seeing the school grow and develop under new leadership. Meanwhile, however, we still have much to do in the coming year, and I am looking forward to moving ahead with our agenda during the remainder of my term."

A major focus of work during Poor's tenure as dean was participating in the University's most recent comprehensive fundraising campaign, Aspire, which resulted in major new research and teaching efforts based at the school. Among those additions, highlights include: the creation of the Andlinger Center for Energy and the Environment and the Center for Information Technology Policy and the endowment of the Keller Center for Innovation in Engineering Education, which supports innovations in education and entrepreneurship. The campaign also resulted in 10 new professorships, two preceptorships, a visiting professorship and more than $65 million in innovation funds to support ongoing faculty and student research.

During Poor's tenure as dean, the amount of building space dedicated to engineering also increased by nearly 40 percent, with the addition of Sherrerd Hall and renovated space in Hoyt Lab as well as the Andlinger Center for Energy and the Environment, which is to be completed and occupied for the fall semester.

Dennis Keller, a Princeton alumnus and co-chair of the engineering school's Leadership Council since 1992, said that a key to Poor's success has been his focus on attracting the very best faculty and ensuring they and their students have the resources they need to do their best work.

"Working with Vince has been inspiring," Keller said. "In his low-key and friendly way, he has been an enormously effective advocate of the school. He has not only built a vibrant environment for teaching and learning but has projected a strong vision of Princeton Engineering in the service of society. I sense the excitement and purpose around the school every time I step onto campus."

Poor earned his Ph.D. in electrical engineering and computer science from Princeton in 1977 and went on to join the faculty at the University of Illinois-Urbana/Champaign before returning to Princeton in 1990. Poor has been widely recognized for his research contributions and leadership in the field of wireless communications and signal processing. He is a member of the American Academy of Arts and Sciences, the National Academy of Sciences, and the National Academy of Engineering, as well as the Royal Society of London and the Royal Society of Edinburgh. In the last five years, he has received four honorary degrees from universities around the world in recognition of his research.

Poor also has been widely recognized for his teaching. In 2000, he created "The Wireless Revolution," a course that quickly became one of the largest on campus at the time as it wove together emerging technology and its societal impact. In 2005, his predecessor as dean, Maria Klawe, appointed him founding director of what is now the Keller Center. In that capacity, Poor led the creation of an alternative freshman curriculum that integrates engineering, math and physics into a unified set of courses. He also began the expansion of the school's activities in entrepreneurship and experiential learning that have since grown into major aspects of the center's role. He has received the National Science Foundation's Director's Award for Distinguished Teaching Scholars, the engineering school's Distinguished Teacher Award and the IEEE James H. Mulligan Jr. Education Medal.

Poor will take a sabbatical during the 2016-17 academic year before returning to teaching and research.