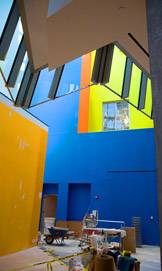 Large, adjacent walls in the new Lewis Science Library are painted in such colors as bright blue, orange and chartreuse. An area on the first level called "the street" is paved with rose-colored limestone. Under construction since 2004, the 87,000-square-foot facility is slated to be completed this spring. Offices will move in over the summer, and the building will be fully operational in the fall.

At left: The main entrance to the building is on the first level off Ivy Lane. Patrons will cross the threshold into a multi-story atrium. Although not evident in this picture, Fine Tower (at right) is about twice the height of the new library tower. 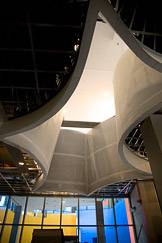 A star-shaped opening between the first and second floors is one unique design element of the new library.     At left: The center tower is flanked by a two-story wing along Washington Road that is part of the library and a three-story wing along Ivy Lane that houses the Education Technologies Center, New Media Center, Princeton Institute for Computational Science and Engineering and OIT's computational science and engineering support group.     Below left: Glass, steel and stucco come together to create some fascinating sight lines and patterns in the building. Below right: The library starts below grade on the A level with a room containing compact stacks. This room will connect with the current library in Fine Hall, which will be incorporated into the complex and known as the Lewis Science Library Fine Hall Wing. Bottom left: Glass walls project from the ceiling to create an enclosed area surrounded by the atrium. Bottom right: The exterior of the building, composed of stainless steel, light-colored brick, glass and stucco, is distinguished by its bold, curved roofline and center tower that rises to a height of 103 feet.     Photos: Brian Wilson

Those who have watched its bold, curved stainless steel roofline emerge on the corner of Washington Road and Ivy Lane no doubt believe the Lewis Science Library designed by Frank Gehry will have a distinctive exterior look.

A recent tour of the building's yet unfinished rooms and halls shows an interior to match: glass walls jut down from the ceiling to create an enclosed area surrounded by an atrium; an opening between two floors appears in the shape of a star; large, adjacent walls are painted in such colors as bright blue, orange and chartreuse. 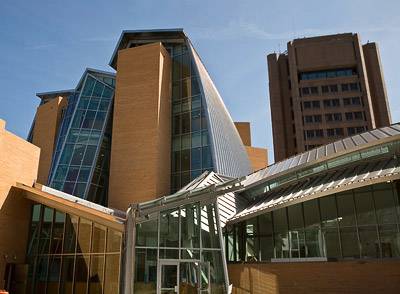 Construction of the 87,000-square-foot facility began in 2004 and is slated to be completed this spring. Offices will move in over the summer, and the building will be fully operational in the fall, according to Henry Thomas, project manager in the Office of Design and Construction. The dedication is planned for Thursday, Nov. 20.

The library initially will house the astrophysics, biology, chemistry, geosciences, mathematics, physics and statistics collections, the map collection and the digital map and geospatial information center. It will occupy primarily the four-level tower and the A level below grade as well as a two-story wing along Washington Road.

The rest of the facility, mainly in a three-story wing along Ivy Lane, will be home to two of Princeton's principal instructional technology support groups in the Office of Information Technology (OIT): the Education Technologies Center and the New Media Center. In addition, it will house a new Broadcast Center operated by OIT and the Princeton Institute for Computational Science and Engineering, as well as OIT's computational science and engineering support group. 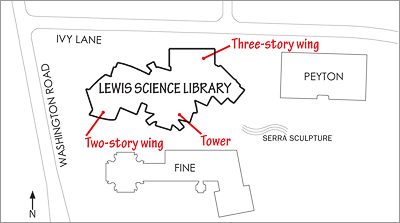 The building is named for Peter Lewis, a 1955 alumnus, University trustee and chairman of the board of the Progressive Corp. In 2001 he announced that he was making a gift of $60 million to support the construction and the programs of a new science library at Princeton. Gehry, known worldwide for his postmodernist work, has received the Pritzker Prize, the highest award in architecture.

"From the time that the College of New Jersey [as Princeton was then known] hired Benjamin Latrobe, our country's first professional architect, to rebuild Nassau Hall after its first fire [in 1802], Princeton has been commissioning leading architects in the U.S. and now the world to design buildings that are an integral part of the architectural history of America," said Jon Hlafter, University architect emeritus. "Having a building by Frank Gehry on the campus is a fitting continuation of that legacy."

The Princeton library's exterior is composed of stainless steel, light-colored brick, glass and stucco. The steel arrived here on coils and was converted to formed panels by local sheet metal fabricators. It has an embossed surface that dulls the finish and diffuses the light. The roofline rises to 103 feet, about half the height of nearby Fine Tower. 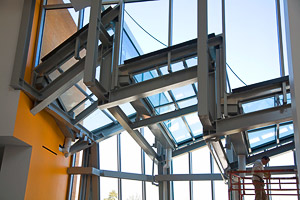 The library is designed to meet the needs of students, faculty and staff better than the previous patchwork of small, discipline-specific science libraries located throughout campus. Stacks on the A level of the new library will connect with the current library in Fine Hall, which will be incorporated into the complex and known as the Lewis Science Library Fine Hall Wing. The astrophysics collection moved into Fine Hall from Peyton Hall in early April. The chemistry library collection will join the Lewis collection this summer, and the psychology collection will be incorporated when that department moves in the future from Green Hall into new quarters south of the Icahn Laboratory.

"We view it as an integrated science library so there's one periodical collection, one reserve," said Dorothy Pearson, associate University librarian for administrative services. "One advantage is that the sciences are becoming more and more interdisciplinary."

Patricia Gaspari-Bridges, head of science and technology libraries, said that in addition to providing an interdisciplinary approach to research, the new library represents a more organized and effective way to manage resources, information and library services.

"The users will have one place to look," said Gaspari-Bridges, who will oversee the new library. "The journals will be in title order, the monographs will be in call number order. We're not going to maintain separate collections. It gives us an opportunity for a more efficient way to shelve the collection and manage the collection. We won't need duplicate subscriptions to journals such as Nature and Scientific American."

From the ground up

Starting from the A level, the room containing the compact stacks also will provide user tables and a small group of carrels. A corridor on that floor will connect the library with the Brush Gallery of Fine Hall. The digital map and geospatial information center will be located in the Fine Hall Wing. Across the hall from the stacks in the library will be the Broadcast Center, which will include a complete video and audio studio that will be available to faculty and students.

The first floor entrance to the library off the atrium will feature a large information desk designed by Gehry with his signature curves. There will be a few stacks containing the library's primary reference collection and new book collection, along with tables and seating. There also will be a tech room with a few computers, a scanner and graphics software to enable patrons to get started on projects. In addition, librarian offices and a workroom will be on this floor.

Two bowl-type classrooms -- one seating about 75 and the other about 50 -- will be located outside the confines of the library on this floor. The wing of the building near Ivy Lane will house the New Media Center, which will be moving from 87 Prospect Ave. The center will more than double its current floor space for workstations that support state-of-the-art software and hardware for creating and manipulating digital objects, such as images and movies. 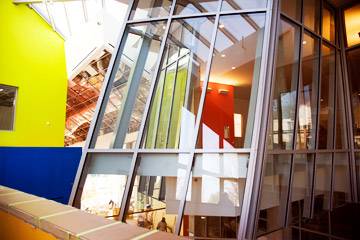 On the second floor, the library extends out of the tower into the glass-enclosed area that overlooks the atrium. Unbound periodicals will be shelved in this section, including around the star-shaped opening to the floor below. There will be tables and chairs for patrons.

A large room near Washington Road, dubbed "the treehouse" by the architect, will be used for a reading area, with tables and comfortable chairs. With its sizeable canopied windows and clerestories, the space feels like a secret hideaway, perfect for spending a few hours with a good book. The room also may be used on rare occasions for special events.

This floor also includes an electronic classroom and library seminar room. "This will be a big technological improvement, giving us the opportunity to do more with our instructional program," said Gaspari-Bridges. The library regularly runs programs for patrons and staff on such topics as new databases and evaluating Web resources.

Finishing out the library space on the second floor will be a workroom, librarian offices, a copy center and a conference room for staff.

On the second floor of the wing near Ivy Lane will be the Educational Technologies Center, which will move from the Frist Campus Center. The location close to the New Media Center will allow for greater collaboration and integration between its team of Web designers and programmers and the faculty who are increasingly dependent on their services, according to Serge Goldstein, associate chief information officer and director of academic services in OIT.

The third floor of the Ivy Lane wing will house the Princeton Institute for Computational Science and Engineering, located in Peyton Hall, and OIT's computational science and engineering support group. These two entities collaborate in supporting a set of research computers and storage and communication devices that have put Princeton at the forefront of institutions that are leveraging high-performance computing to address fundamental problems in science and engineering.

A number of the machines currently housed at 87 Prospect (collectively referred to as the "TIGRESS" facility) will move to the library, freeing up space to support additional operational and research machines. The library also contains space that is expected to be dedicated to the use of visualization technology to help researchers from all parts of the University (including the social sciences and other areas such as architecture) to render, analyze and display data generated by the TIGRESS facility or other sources of high-end visual data. 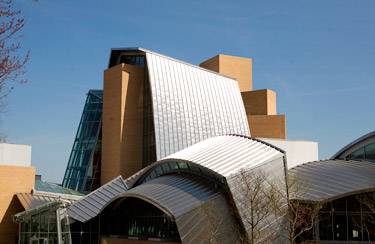 Back in the tower, the third and fourth floors are intended solely for library patrons. They will contain small classrooms, group study rooms, small computer clusters, carrels and soft seating.

"One of the things the science graduate students mentioned to us in meeting with them was that they would really like a very quiet space with no cell phones, no noise," said Gaspari-Bridges. "This will be the quietest space in the library."

The fourth floor also offers some magnificent views of the Ivy Lane wing's stainless steel roofs below and the campus beyond.