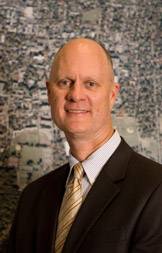 Ron McCoy, a Princeton graduate alumnus who has worked for the past 27 years as an architect and educator, has been selected as the new University architect.

McCoy currently is the university architect at Arizona State University and a professor in its School of Architecture and Landscape Architecture. He will succeed Jon Hlafter, who retired after 40 years at Princeton. His appointment will be effective this summer.

McCoy was invited by the president of Arizona State to create the Office of the University Architect in 2003. Since then, ASU has initiated construction on 6.4 million square feet of new facilities at a cost of $1.34 billion. This work includes the development of a new campus in collaboration with the city of Phoenix in addition to projects on its main campus in Tempe.

"It was absolutely clear to all of us who met Ron that he has the experience, intellect and approach we were seeking in the person who will fill this critical role," said Michael McKay, vice president for facilities, to whom McCoy will report. "One of the key attributes necessary in this position is to be able to make decisions based on over 260 years of campus evolution while understanding how those decisions affect -- and will be viewed by -- future generations. Given that we are in the early stages of one of the greatest phases of growth in the University's history, with roughly 2 million square feet of new construction and renovation planned over the next decade, it is critical that we have strong leadership in making major decisions as to how the campus will evolve."

As University architect, McCoy will be responsible for working closely with others to implement the University's new 10-year Campus Plan and to execute the 10-year capital program. He will have a key role in matters of aesthetics and the preservation of the University's architectural heritage, including leading the process of selecting architects and other consultants. In addition, he will play a major role in representing the University in relationships with the Princeton Regional Planning Board and other public regulatory authorities.

McCoy earned his bachelor's degree in design from the University of Southern California in 1976 and his master of architecture degree from Princeton in 1980.

While enrolled in the master's degree program, he worked as a project designer with Michael Graves, a faculty member in Princeton's School of Architecture with his own practice in Princeton and New York. After earning his degree, McCoy spent five years with Venturi, Scott Brown and Associates of Philadelphia, and was the project architect for the Lewis Thomas Laboratory. Since 1985, he has maintained his own practice with his wife and partner, Janet Simon.

McCoy has played a leading role in sustainability initiatives at ASU. Ten new buildings have been awarded Leadership in Energy and Environmental Design (LEED) certification under the rating system developed by the U.S. Green Building Council, including three LEED gold buildings and the only LEED platinum research laboratory in Arizona. McCoy is a member of the ASU President's Leadership Council on Sustainability and has helped the university initiate the Solar Energy Performance Contract in association with the Clinton Climate Initiative, a plan that will employ photovoltaic panels on approximately 300,000 square feet of existing rooftops, generating approximately 2 MW of electricity. In his role as school director, McCoy had responsibility for the master of science in climate responsive design, a degree program dedicated to sustainable design practices.

McCoy has been recognized for his achievements as an architect, as well as his significant contributions to architecture and society on both the state and national levels. In 2006, he was awarded the Arizona Architects Medal, presented by the state chapter of the American Institute of Architects (AIA). A year later, he was named to the AIA College of Fellows.

"This is an exciting opportunity," McCoy said. "The Princeton campus is recognized around the world as a unique setting, one that combines memorable historical buildings and landscapes with recent work from some of the most qualified architects in the world. What is special about this position is that President [Shirley M.] Tilghman and her administration have a profound respect and understanding for campus design. In my discussions with the University it became clear that the qualities of the Princeton campus would not endure without a singularly focused commitment from the leaders of the University to preserving the historic beauty of the campus while creating innovative new facilities for today's students and faculty."

He added, "I have known Jon Hlafter since I was a student and served as a representative on the University Design Review Committee. I always saw Jon as a special person, a very smart architect with great skill and responsibilities. One has to be very humble to assume this position in his footsteps. But Princeton has just completed an excellent campus plan for the next 10 years, and I am confident and excited about working with Mike McKay and his team of great professionals. The new plan is a thoughtful guide, identifying strategies to preserve and enhance the qualities of the existing campus while fostering a new generation of buildings and landscapes that will be meaningful and uniquely suited to Princeton."