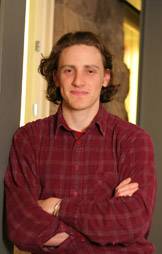 Seven sophomores are winners of this year's Dale Summer Awards, which provide a $4,000 stipend to pursue a summer project not connected to their academic coursework. The recipients and the titles of their projects are:

Through a deeply personal exploration of mental illness, senior Joshua Blaine hopes to use his Martin Dale Fellowship to illuminate a subject that many people consider taboo.

Blaine struggled with bipolar disorder -- which causes severe shifts in a person's mood, energy and ability to function -- midway through his college career. He spent 18 months battling the disease before gaining control of it with the help of medical professionals.

"There's a Catch-22," Blaine said. "Because there's a stigma, people don't talk about it, and because of that, the stigma continues."

During the next year Blaine will undertake an anthropological study of his experience with mental illness, as the winner of the Dale Fellowship. The $27,500 prize is awarded annually to allow a graduating senior "to devote the year following graduation to an independent project of extraordinary merit that will widen the recipient's experience of the world and significantly enhance his or her personal growth and intellectual development."

In his Dale proposal, Blaine wrote: "I wish to return as a student of anthropology; as a young man in search of peace of mind; as a storyteller; and as a compassionate individual determined to destigmatize mental illness for the millions of fellow sufferers."

Using the tools he learned as an anthropology major, Blaine will examine what happened to him by interviewing friends and family members, traveling to the hospital in Luray, Va., where he was treated for bipolar disorder, and studying his medical records. He also will analyze the poetry, drawings and music he created during that period. By reviewing his medical records in conjunction with his writing from the period, he will be able to contrast medical observations about his behavior with what he was feeling at the time.

"My goal is to reframe how I understood the experience and to explain it to others," Blaine said. "I'm trying to construct a picture of an actual person out of this, rather than a patient."

"This is an extremely relevant project: to trace mental illness from the perspective of recovery," Biehl said. "Josh is deeply committed to understanding bipolar disorder as one of the quintessential American medical experiences of today, to destigmatize mental illness, and to inquire into alternative pathways of care and recovery. He has all the methodological tools and theoretical concepts to bring this project to fruition, and I have no doubt that its outcomes will make significant contributions to public culture and to efforts to further humanize mental illness treatment."

Blaine plans to travel to San Francisco to conduct interviews with his brother and with Princeton graduates who knew him during college. He also will visit Boston, his hometown, to talk to high school friends and family members. He hopes the interviews will shed light not only on what he went through, but also on the experience of dealing with a friend or family member with mental illness.

"I want to ask them, 'What is it like to encounter someone you've known for 20 years in an altered state?'" Blaine said.

Blaine will employ the ethnographic interviewing skills he learned as an anthropology student and honed last summer in New Orleans, where he conducted research for his senior thesis. He did fieldwork with a not-for-profit organization that is helping to rebuild the health system. Blaine spent time observing and talking to mental health professionals, social workers, public health workers and policymakers. His thesis explored individual stories of mental health workers in New Orleans in the context of the social and economic situation in the city.

Using an ethnographic approach to studying his own mental illness should allow Blaine to capture what someone with the disease experiences, gaining insights that are difficult for anthropologists to reach.

"Mental illness in particular poses an interesting problem for the anthropologist," Blaine wrote in his Dale proposal. "No ethnographer, no matter how good a 'participant-observer,' can ever enter fully into the subjectivity of a person undergoing an abnormal psychological experience."

Blaine plans to assimilate what he learns over the next year by writing essays and fiction about his experiences. He also hopes to deliver lectures on college campuses across the country, and is thinking of attending graduate school for anthropology. He knows that delving into his past won't be easy for him and those he interviews.

"A couple of friends I've mentioned it to said it would be really difficult (to talk about my illness), but they would do it," Blaine said. "Getting this material out there — by doing this project and being open about it — will do a lot to create a dialogue and open avenues for other people to talk about their experiences."