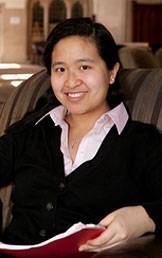 Sixteen sophomores are winners of this year's Dale Summer Awards, which provide a $4,000 stipend to pursue a summer project not connected to their academic coursework. The recipients and the titles of their projects are:

Over the next year, senior Lisa Tom will combine her two academic passions at Princeton -- anthropology and creative writing -- by transforming fieldwork into fiction.

Tom spent last summer in Guatemala City interviewing patients at a medical clinic as her fieldwork for her anthropology major. The experience became the inspiration for her creative thesis, a novel about an epidemiologist working at a Guatemalan HIV/AIDS clinic. Next year, as the 2011 winner of Princeton's Martin Dale Fellowship, she will immerse herself in a community closer to home -- Chinese Americans living in her native Baltimore -- to write a collection of short stories or a novel about that immigrant community.

The $30,000 Dale fellowship is awarded annually to a graduating senior to allow him or her "to devote the year following graduation to an independent project of extraordinary merit that will widen the recipient's experience of the world and significantly enhance his or her personal growth and intellectual development."

"I thought, 'What would I do next if I could really do anything?'" Tom said of devising her Dale project. Her love of creative writing led her to the stories of her grandparents, who came to Baltimore from China in the 1930s, '40s and '50s. She realized that when grandparents and parents tell stories, "We're often half-listening when really we should be listening carefully."

To that end, Tom will spend several months in Baltimore, interviewing her grandfather, who is 83, as well as family members and others in the community. She also will live for part of the year in a writers' colony and travel to China to visit her grandparents' ancestral village in Taishan.

The fiction she writes will be about tradition and ethnicity in the Chinese American community in Baltimore, but also about "what it means to be a second- or third-generation American, like me," Tom said.

It was the semester she spent studying at Capital Normal University in Beijing during her junior year that really made Tom, who speaks Mandarin as well as Spanish, think about her Chinese roots.

Her volunteer work at the University Medical Center in Princeton, where she has served as project coordinator for volunteer Spanish interpreters since 2008, also got her thinking about what it means to come to a new country and start a new life. "I really like helping Spanish speakers who come to the hospital," Tom said. "And it has provided a window into the current immigrant experience in the United States."

Tom's Dale research will be, in a sense, anthropological fieldwork. She will use her exploration of her Chinese American community as the springboard for her fiction, much as she did for her novel, which served as her thesis in the anthropology department and in the Program in Creative Writing, in which she is earning a certificate. In addition to the novel, which was advised by novelists and creative writing faculty members Joyce Carol Oates and Lorrie Moore, Tom wrote a critical section analyzing anthropological writing about fiction and ethnography.

"Lisa confronted technical and intellectual challenges different from those of most seniors majoring in anthropology and most students in creative writing," said Professor of Anthropology Rena Lederman, Tom's thesis adviser. "Most fiction writers do not need to face the ethical and analytical constraints that ethnographers take for granted. She has faced these challenges with courage and admirable energy and skill."

Tom has studied writing at Princeton with John McPhee, the Ferris Professor of Journalism and a well-known writer for The New Yorker, who noted that Tom wrote a nonfiction piece about organic chemistry that was "solidly informative" and "entertaining." In another composition, "she described her mother's bird's nest soup, traced the history of the dish and used the story as a window into her family's history," McPhee said.

Tom thrives on research, whether it is about her family or about patients in the Guatemalan clinic, she said. Asking the right questions -- a skill she honed in anthropology courses as well as while working as a freelance writer for The Baltimore Sun -- has led her to promising material for her fiction.

"I never would have written a novel taking place in Guatemala if I hadn't done research there," Tom said. "It started with my real-life experience, but the main character is not me. ... The beauty of fiction is that you have the freedom to invent."

To further develop her writing life on campus, Tom founded the Princeton Writers' Workshop in 2008. She has organized seminars with authors for fellow writers on campus, and held weekly workshops in which students exchange creative work.

"I wasn't able to take a creative writing class every semester," said Tom, who also studied at Princeton with fiction writers Jeffrey Eugenides and Amy Hempel, screenwriter Christina Lazaridi and poet Brenda Shaughnessy. "I thought that there must be other students like me who would be more motivated to keep writing if someone was going to look at their work."

After she completes the Dale Fellowship, Tom hopes to become a physician, with an eye toward a career combining medicine and writing.

"Medicine is full of amazing stories," she said.