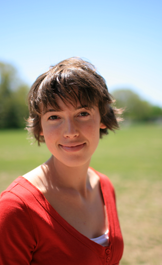 2006 Martin Dale Fellow Mimi Chubb will spend the next year traveling and writing about Western imagery.

Eight sophomores are winners of this year’s Dale Summer Awards, which provide a $4,000 stipend to pursue a summer project not connected to their academic coursework. The recipients and the titles of their projects are:

From the May 8, 2006, Princeton Weekly Bulletin

Although it was the mid-1990s when Mimi Chubb’s family moved from Brooklyn to California’s Orange County, the pioneer spirit of the Old West was still alive and well.

Chubb, now a Princeton senior, quickly grew fascinated with horses, cowboy gear and other symbols of the “authentic” American West after moving cross-country to Irvine, Calif., at age 11. She will engage these interests through a year of traveling and writing about Western imagery as the 2006 winner of the Martin Dale Fellowship.

The $27,500 fellowship is awarded annually to a graduating senior to allow him or her “to devote the year following graduation to an independent project of extraordinary merit that will widen the recipient’s experience of the world and significantly enhance his or her personal growth and intellectual development.”

Chubb, an English major and certificate candidate in creative writing, plans to write a collection of five essays on her observations of Western culture. The project, titled “Fantasy, Authenticity and Identity: Imagining the American West,” will allow Chubb to explore her own feelings of connection to the West while observing and writing about people and subjects that “haunt and fascinate” her.

“My cookie-cutter suburban neighborhood was as dissimilar as could be to an Old West boomtown, but we nevertheless spent months on end in elementary school studying the Gold Rush, as if it were holy lore,” Chubb wrote in her Dale application. “Sometimes we even panned for fool’s gold in patches of mud that had been carefully stocked by our teacher and a few parent volunteers, who also handed us Dixie cups full of baked beans.

“I grew up riding horses — symbols of the West for me and for many others — and my obsession with everything about them propelled me into various communities of horse people, many of whom would wear cowboy hats and vanity license plates on their pickups printed with phrases like ‘COWGRRL,’ regardless of whether they had ever ridden in a Western saddle,” she wrote. “None of this ever really made sense to me when I was growing up, although the people I knew seemed to assume that it would.”

For her Dale project, Chubb will travel around California and surrounding states with an aim “to focus on the ways in which these myths and fantasies create identities and create ‘the real’ for some people.”

She first plans to study a group of Californians who adopt wild mustangs from the U.S. Bureau of Land Management, through which she will explore the concept of “wildness” in the West. She then will look at ways in which the Old West is marketed by following the Miss Rodeo America pageant through California to its final round in Las Vegas, “which promises to be a riot of big teased curls and flashy Western fashions.”

Chubb also hopes to engage members of the Mojave Muleskinners, an Old West re-enactment group, and the American Mountain Men, an organization dedicated to preserving “manly” Old West traditions. She also will examine the continuing lure of ghost towns among visitors, preservationists and commercial developers. Finally, she will delve into the world of cowboy poetry, “which has become a powerful, insider-centered genre for imagining the West, its history and its future that has a vibrant community of readers.”

The Dale project will allow Chubb to pursue longer, more literary writing projects and hone her journalistic skills, building on the considerable experience she has gained as a Princeton student.

“It’s going to be just wonderful,” Chubb said. “What’s so exciting about the Dale Fellowship is the opportunity to focus on this one thing that I want to do so much. It is very hard to fit [writing] in against a background of a lot of other activities and classes.”

Chubb has won numerous awards for her writing and academic accomplishments, including the Class of 1870 Junior Prize for the best junior English scholar in 2005 and the Shapiro Prize for Academic Excellence in 2004. For her senior thesis, she wrote a novel that centers on a “megachurch” whose leaders and members are defined by their sense of Western identity and values. The characters were based on people she observed while attending an Orange County megachurch last summer, with funding from the English department’s A. Scott Berg Award for summer research.

Chubb’s thesis adviser was the novelist Chang-rae Lee, a professor in the Council of the Humanities and creative writing. Lee is one of several acclaimed writers on the University faculty with whom Chubb has studied, including Joyce Carol Oates, Edmund White and C.K. Williams.

Author and editor Wendy Lesser, a visiting professor at Princeton last year, also has had a significant influence on Chubb — publishing two of Chubb’s essays in her literary magazine, The Threepenny Review.

“Her work is subtle and complex without ever being obscure or pretentious, and she has a mastery of tone that I have rarely seen in any student — in fact, in anyone under about 35 or 40,” said Lesser, who taught Chubb in a course on “Autobiography and Criticism.”

Chubb also spent two years as a reporter for The Daily Princetonian and worked as an editor for three campus literary publications. She twice served as a summer intern for The New Yorker, reviewing fiction submissions “and learning a lot about how they develop their pieces,” she said.

Chubb may pursue graduate studies after completing her Dale project, but knows that writing is her ultimate career goal.

Lesser said, “She has the talent and she also has the drive — not the obnoxious careerist-ambition kind of drive, but the down-to-earth willingness to work very hard until she gets something right. I have already mentioned her name to several editors in New York and told them to watch for her work in the future.”