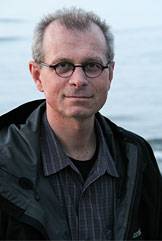 By combining people's life stories with analysis of medical and legal data in Brazil's urban centers, Princeton University anthropology professor Joa͂o Biehl and his research team are exploring how the country's constitutional right to health has played out in the courts and in patients' lives. Biehl has a deep commitment to people-centered scholarship and to mentoring his students and early-career scholars.

In 2010, Edgar Lemos, a retired bus driver in Porto Alegre, Brazil, sued his government for failing to provide medication to treat his neurological disorder. It was his privilege to do so: Brazil and more than 100 other nations grant the right to health, which in Brazil has given rise to numerous lawsuits against the government for access to medicines of all kinds.

Princeton University anthropology professor João Biehl has documented the emergence of right-to-health litigation in that country over the past decade. Through visits to courtrooms and clinics to meet patients and record their stories, combined with rigorous evaluation of medical and legal data, Biehl, a native of Brazil, and his research team have created a detailed picture of who sues for treatment and why in this country of about 200 million people and an economy on the rise.

Biehl's work has helped dispel myths that Brazil's universal health care and judicial system are being largely misused by well-off individuals to gain access to expensive and unnecessary medications, and has led to a broader debate about social justice and access to medical technologies.

"Our goal was to produce a genuine understanding of the judicialization of the right to health," said Biehl, the Susan Dod Brown Professor of Anthropology and faculty associate at the Woodrow Wilson School of Public and International Affairs. He is also co-director of the Program in Global Health and Health Policy at Princeton.

"Database analyses are crucial," Biehl added, "but we also need to engage people's trajectories and life stories, and find ways of creatively bringing the complex evidence that we gather on the entanglement of biology, social environment and medicine to the public and to policymakers." 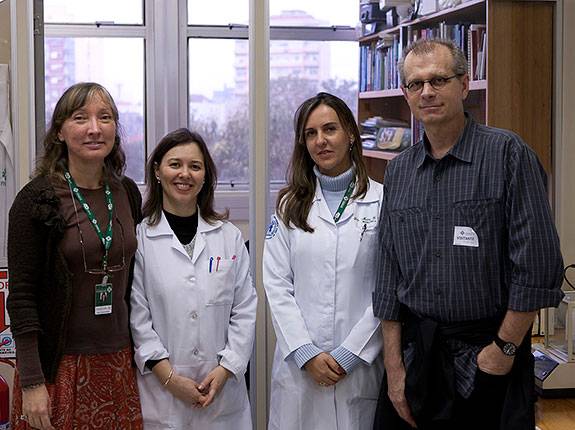 Laura Bannach Jardim (from left), chief of the Medical Genetics Service of Hospital de Clínicas of Porto Alegre, pictured with researchers Maira Graeff Burin and Kristiane Michelin-Tirelli, collaborated with Biehl on an ethnographic study of patients with rare genetic disorders who are filing lawsuits for access to high-cost enzyme replacement therapies.

Exploring entanglements and finding the connections between life stories and the underpinnings of society are fundamental to Biehl's work. His methods include not only ethnography — the written field studies or case reports that arise from anthropological research — but also visual storytelling through photography.

Biehl's education and career have emphasized a cross-disciplinary approach. He received undergraduate degrees in theology and journalism and a master's degree in philosophy from academic institutions in Brazil. He earned a doctorate in religion from the Graduate Theological Union in 1996 and a doctorate in anthropology from the University of California-Berkeley in 1999. Before joining the Princeton faculty in 2001, he was a National Institute of Mental Health postdoctoral fellow at Harvard University in the Department of Anthropology and the Department of Global Health and Social Medicine.

Biehl's far-reaching training is a boon for his students, who learn the importance of integrating disciplines and developing research skills in the field. Often, he enlists his students as assistant researchers, even as early as freshman year.

"Patients in growing numbers are not waiting for medical technologies to trickle down, but are demanding access now, even if one-by-one — one disease and one court case at a time," Biehl said. 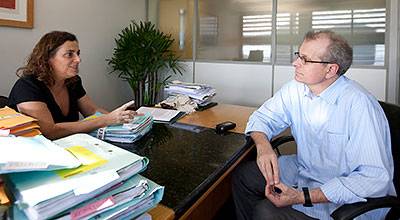 State judges such as Denise Oliveira Cezar, shown here with Biehl, are called on to decide whether pharmaceutical companies conducting clinical trials in Brazil must provide medicines after successful trials.

Of 1,080 lawsuits the researchers chose randomly for closer scrutiny, the majority were brought by poor individuals who depended on the public system for obtaining both health care and legal representation. Most plaintiffs were older than 45 years, retired or unemployed, and represented by public defenders. They were, for the most part, chronically ill, Biehl stated.

Nearly two-thirds of the requested drugs were already on government formularies and should have been available to the plaintiffs, belying the misconception that the lawsuits were for pricey brand-name specialty drugs, Biehl said. He noted that this situation indicated significant problems at all administrative levels in the country's innovative yet struggling universal health care system. Almost all of the lawsuits were decided in favor of the plaintiff, Biehl said, with the judges citing the government's obligation under the constitution's provision of the right to health.

Biehl conducted the study with epidemiologist Joseph Amon, director of the Health and Human Rights Division of Human Rights Watch and a lecturer in Princeton's Woodrow Wilson School of Public and International Affairs; physician Mariana Socal, a 2010 graduate of the Master in Public Policy Program at the Wilson School and a doctoral student in health systems at the Johns Hopkins Bloomberg School of Public Health; and Adriana Petryna, the Edmund J. and Louise W. Kahn Term Professor in Anthropology at the University of Pennsylvania and Biehl's wife. The study was published in the June 2012 issue of the journal Health and Human Rights.

"The paper is part of the active debate about what the right to health means in Brazil and elsewhere," Amon said. "The whole question of whether social and economic rights can be decided in the courts — it hasn't been studied in this way." 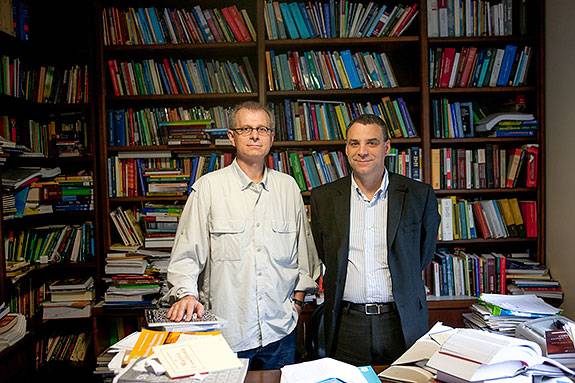 In addition to combing through medical and judicial records, the researchers conducted in-depth interviews with physicians, public defenders, judges, policymakers and patients. From these interviews, Biehl and his colleagues gained understanding of the complex and varied experiences of the plaintiffs, underscoring Biehl's conviction that social policies cannot be evaluated solely on technical and statistical approaches.

Biehl and Petryna explore these insights further as co-editors of the forthcoming book "When People Come First: Critical Studies in Global Health" (Princeton University Press, 2013). In it, they find fault with the trend toward evidence-based public health with its focus on randomized evaluations, statistical significance of results, cost-effectiveness, and a growing disregard for people-centered case studies and reflections.

"The focus on numbers should not come at the expense of the unpredictable social and hard-to-measure or unanticipated outcomes," Biehl said. "We have to use interdisciplinary and critical ways of assessing the design as well as the value of interventions for patients, for families, for communities."

To help emphasize the human story, Biehl enlisted Danish artist Torben Eskerod to capture images of the patient-plaintiffs engaged in access-to-medicines litigation. Eskerod documented Biehl's previous ethnographic work on Brazil's pioneering universal AIDS treatment policy in the award-winning book "Will to Live: AIDS Therapies and the Politics of Survival" (Princeton University Press, 2007), and Biehl's ethnography of what it is like to be mentally ill and abandoned by family and society in Brazil's big cities in "Vita: Life in a Zone of Social Abandonment" (University of California Press, 2005). 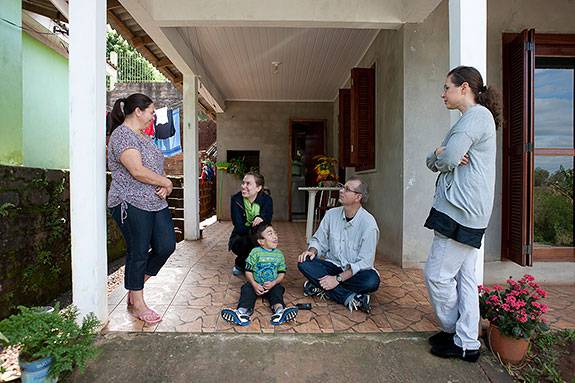 During a home visit, Biehl (second from right), anthropologist Adriana Petryna (far right) and research assistant Roberta Grudzinski (center) talked to 12-year old Alexandre, who suffers from an inherited metabolic disorder called mucopolysaccharidosis, and his mother, Cleonice Lima de Moura (far left). With the legal support of a patient association, the family won a court injunction forcing the federal government to begin providing the US $200,000-per year therapy.

Engaging with students by integrating teaching and research

As co-director of Princeton's Program in Global Health and Health Policy, Biehl oversees the education of juniors and seniors interested in exploring the causes and patterns of disease and impact of health interventions across societies. The interdisciplinary program weaves experiential learning and fieldwork into the curriculum, offering opportunities to conduct research in health policy, care and laboratory settings both in the United States and abroad. 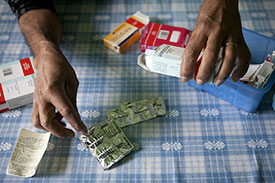 In a conversation with Biehl in Porto Alegre in 2011, pensioner Edgar Lemos opened a box containing the drugs that make up his treatment regimen. The drug Lemos needed to treat his neurological disorder was not available in official drug formularies and with the help of the public defender's office he successfully sued the state to provide it.

Through Princeton's Grand Challenges Initiative, which tackles complex global problems through the integration of research and teaching, Biehl mentors undergraduates working on their senior theses in a variety of global and domestic settings. To date, 28 undergraduates in anthropology and other majors have conducted research through Biehl's project, the Future of Global AIDS Treatment and the Social Determinants of Health, in countries including Guatemala, Sierra Leone and South Africa.

Senior Courtney Crumpler has been working with Biehl since her freshman year. "With Professor Biehl's guidance, I was able to explore my own interests as well as participate in a team of researchers," said Crumpler, who is writing her thesis on nutritional aspects of the public health policy in Brazil. "He is a professor that really has the interests of undergraduates in mind."

Biehl is a dynamic classroom teacher, said senior Raphael Frankfurter, who is writing his thesis on the use of traditional healers in Sierra Leone. "He has this incredible ability to give a 60-person lecture the feeling of a small seminar," Frankfurter said. "He gets to know the personalities and interests and strengths of his students, even in large classes, and he integrates lectures with discussions." 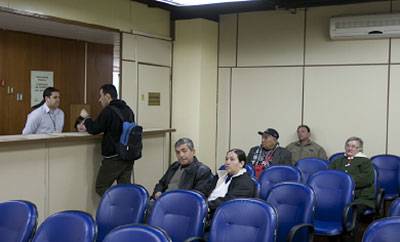 The Public Defender's Office in Porto Alegre provides free legal assistance and is where the majority of the lawsuits requesting medicines from the state originate. Biehl and his research team carried out in-depth interviews with 30 patient-plaintiffs at the office.

In addition to teaching undergraduates, Biehl advises graduate students and postdoctoral researchers and is involved in the newly launched project on global health and medical anthropology that is being developed in partnership with the University of São Paulo and is funded by Princeton's Council for International Teaching and Research.

"Biehl has been an incredible mentor and supporter," said Joshua Franklin, a 2011 alumnus who worked with Biehl on the right-to-health litigation project and wrote his senior thesis on the topic. Franklin spent the past year as a Fulbright scholar in southern Brazil and has returned to Princeton to help organize the Princeton-University of São Paulo partnership. "Working with Professor Biehl enabled me to learn firsthand the research methods that are essential to my development as an anthropologist," Franklin said.

"Social fields are in flux and that puts the pulse in academic disciplines too," Biehl said. "We must continue to challenge orthodoxies of all kinds and seek original ways to communicate the categories that are significant in human experience to the worlds of science, policy, jurisprudence and caregiving."