by Joy Scharfstein, Princeton Institute for International and Regional Studies 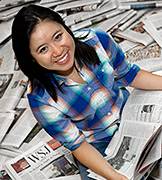 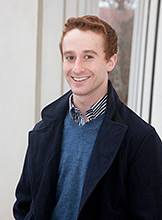 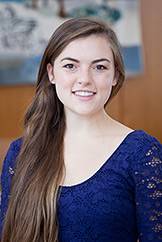 Three Princeton University seniors have been awarded the Henry Richardson Labouisse '26 Prize to spend one year pursuing international civic engagement projects after graduation. The $30,000 prize will support a joint initiative by Shirley Gao and Raphael Frankfurter in Sierra Leone, and a project by Courtney Crumpler in Brazil.

The award to Gao and Frankfurter will aid their work to develop a maternal health coordination center in eastern Sierra Leone. Crumpler's prize will support her efforts to bolster community organizing in underserved communities in Rio de Janeiro in advance of the 2014 World Cup finals and 2016 Olympics there.

The Labouisse Prize enables graduating seniors to engage in a project that exemplifies the life and work of Henry Richardson Labouisse, a 1926 Princeton graduate who was a diplomat, international public servant and champion for the causes of international justice and international development. The prize was established in 1984 by Labouisse's daughter and son-in-law, Anne and Martin Peretz.

"The committee was unanimous in its opinion that these projects best embodied what Ambassador Henry Labouisse's life and career stood for," said Stanley Katz, a lecturer with the rank of professor in public and international affairs at the Woodrow Wilson School of Public and International Affairs. Katz selected the 2013 winners along with Janet Chen, an assistant professor of history and East Asian studies.

Both Gao, concentrating in the Woodrow Wilson School, and Frankfurter, concentrating in anthropology, are pursuing certificates in global health and health policy. They will partner with Wellbody Alliance — a public health care and social justice nonprofit co-founded in Sierra Leone's Kono District by physicians Daniel Kelly, a member of Princeton's Class of 2003 — and Bailor Barrie, to develop a coordination center for the organization's maternal health care program.

According to Gao, a native of Davis, Calif., and Frankfurter, from Durham, N.H., Kono is one of the poorest regions in West Africa; 20 percent of children die before the age of 5 and one in 20 women die during childbirth.

In 2012, one year after Wellbody Alliance initiated a project in Kono to combat those statistics, the duo reported, more than 5,000 women a month were seeking care through it. The response has overwhelmed the nonprofit, which only recently received funding to construct a permanent facility to house examination rooms, screening centers and a headquarters for the maternal health care system.

Gao and Frankfurter plan to hire an additional nurse to handle complex cases; create a center for periodic community health worker retraining; develop a curriculum and train emergency medical technicians; hire two case managers; develop an effective supervisory structure for the community health workers; create a 24-hour communication system for ambulance dispatch; and develop a centralized location for coordination among nongovernmental organizations on maternal health-related activities. The pair also plan to train project managers and head community health workers to assume responsibility for the center and hope to develop fundraising mechanisms to ensure its sustainability. In addition, they plan to pursue longer-term funding for the staff and project expansions.

At Princeton, Gao's coursework in health policy led to an internship last summer in Sierra Leone with the Wellbody Alliance. The experience helped her develop her senior thesis, which examines how the post-conflict Sierra Leone government can build a functional health care labor force. She won senior thesis funding to return to Sierra Leone in January to conduct fieldwork.

"I am thrilled to return to Sierra Leone and work in a field I am passionate about," Gao said. "The Labouisse fellowship allows me to gain valuable on-the-ground experience and build on what I learned last summer and this year as I've engaged in my thesis."

She plans to pursue a career in health policy.

Frankfurter, a certified emergency medical technician, has been a member of the Health Grand Challenges research group on the Social Determinants of Health since his sophomore year. He first traveled to Sierra Leone in 2010 for an internship with Wellbody Alliance, where he worked on the development of the maternal health project.

In 2011 he received a $10,000 Davis Projects for Peace award, coordinated by the Pace Center for Civic Engagement, to implement a community health workers program in the Kono District for Wellbody. With an Adel Mahmoud Global Health Scholars grant, he returned to Kono to work for Wellbody again last summer to lead a team of Princeton interns (which included Gao), conduct senior thesis research and provide project management including an evaluation of the maternal health project that began two years earlier.

After three summers of working in Kono, Frankfurter said, "I've witnessed firsthand the essential and lifesaving care this health care system is providing along with gaps in coordinating that could potentially be costing lives."

Frankfurter's senior thesis addresses the ways patients and traditional healers are responding to the development of health care systems in Kono. His plans include medical school and a career in international medicine.

Crumpler is an anthropology major pursuing a certificate in global health and health policy. She is also earning certificates in Latin American studies, Portuguese and dance. The Labouisse Prize will support her work in Rio de Janeiro with Catalytic Communities. The nonprofit group, also known as CatComm, aims to change the public perception around unserved neighborhoods known as favelas and support community-driven initiatives in these neighborhoods.

According to Crumpler, who is from Raleigh, N.C., preparations for the 2014 World Cup finals and the 2016 Olympic games have the potential to marginalize further many of the 1.4 million people who live in Rio's favelas. CatComm and other community organizations are concerned about forced evictions being carried out in parts of the city marked for event-related development and about favela upgrade programs in neighborhoods closest to the public eye, rather than in those with demonstrated need.

As planned, her project will contribute to CatComm's goals by documenting community organizing initiatives throughout the city and developing strategies to increase participation in them, conducting workshops in targeted favelas, and producing educational materials and news articles for the organization. The basis for this work will be extensive research around the practices of existing community organizations.

"What I am most excited about for this fellowship," Crumpler said, "is the opportunity to collaborate with and learn from my future colleagues in Brazil, discovering the ways that people-centered research is being put into practice as Rio de Janeiro transforms in the coming years."

Crumpler's commitment to Rio and the issues facing its low-income residents began in 2010, when she traveled there as a recipient of a Paul E. Sigmund Scholars Award from the Program in Latin American Studies. The award enabled her to work with a youth theater group on HIV/AIDS-related issues.

In summer 2012, as a recipient of a Davis Project for Peace award, she and a colleague designed and implemented a gardening project at a preschool in Niteroi, a city situated across the bay from Rio. Crumpler also conducted research for her senior thesis on the connections between urban agriculture and health in Rio. An Adel Mahmoud Global Health Scholarship funded her summer research as well as a return trip to Rio in January to continue fieldwork for her thesis.

After her fellowship, Crumpler will pursue graduate studies that combine anthropology, public policy and global health, with a focus on Latin America.