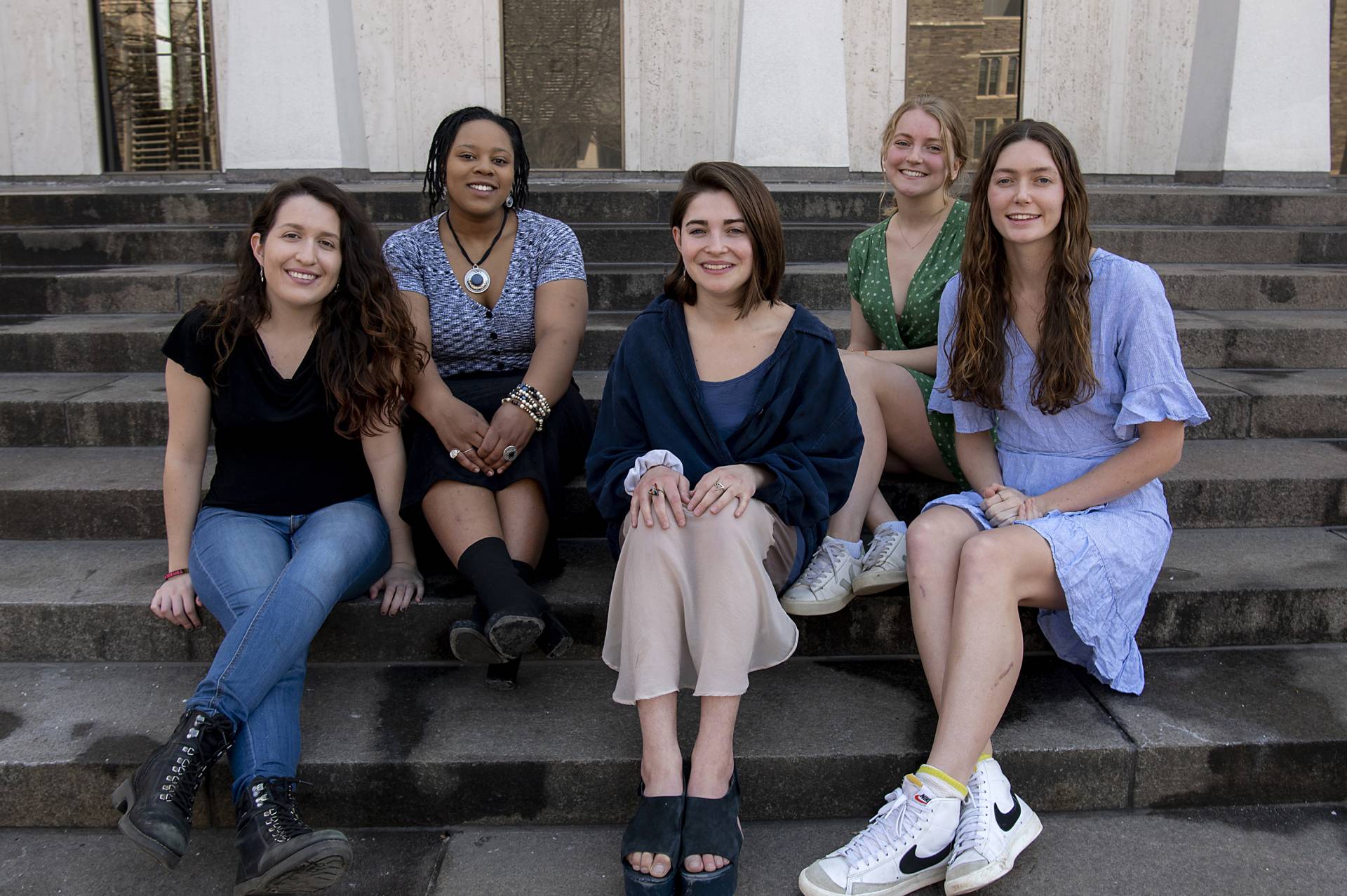 Corcoran, an anthropology major from Washington D.C., will help expand free educational and enrichment opportunities for asylum seekers in Nicosia, Cyprus. Romo Herrera Ibarrola, a politics concentrator from Cancun, Mexico, will help expand a grassroots transparency initiative to rural districts in Malinalco, Mexico. Ruggiero, a concentrator in the School of Public and International Affairs (SPIA) from Malvern, Pennsylvania, will document maternal mortality during the Zika epidemic and COVID-19 pandemic in Brasilia, Brazil. Shifrin, a sociology concentrator from New York City and Newton, Massachusetts, will study the spiritual healing arts in Jerusalem and write songs about those learnings in collaboration with Israeli and Palestinian musicians. Walker, a concentrator in anthropology from Chicago, will travel to Deradhun and Mumbai to examine the evolving landscape of sustainable menstruation in India.

The Labouisse Prize, which awards $35,000 to each recipient, enables graduating seniors to engage in a project that exemplifies the life and work of Henry Richardson Labouisse, a 1926 Princeton alumnus who was a diplomat, international public servant, and champion for the causes of international justice and international development. The prize was established in 1984 by Labouisse’s daughter Anne Peretz and family. It is administered by the Princeton Institute for International and Regional Studies (PIIRS).

“Princeton alumnus Henry M. Labouisse ’26 was a leader of the great global generation that defeated fascism, ended colonialism and sought to build a more equitable post-war and post-colonial world,” said Emmanuel Kreike, professor of history and chair of the Labouisse selection committee. “Today, perhaps more than any time since the end of the Cold War, Labouisse’s message has gained a new urgency. In a world where war, racism, fake news and epidemic disease threaten to deepen divisions and isolationism both domestically and globally, it’s crucial to restore and expand international in-person exchanges and communications. Virtual globalism through such platforms as Facebook or Zoom have proved a poor alternative to the lived experience of doing service or research abroad. Meeting and getting to know our fellow humans, their communities, their cultures and languages, and their environments are all requirements to prevent the misunderstandings and prejudices that feed the hatred and violence that tear us apart.”

Corcoran, who is also earning certificates in African studies and global health and health policy, will spend her fellowship year with the Caritas Cyprus Migrant center in Nicosia, where “there is currently a need for psychosocial support sessions which promote healing, creativity, processing and connection for asylum seeking children and adults,” she said.

“Beata has a deep interest in and commitment to marginalized groups and to diverse cultures, as well as to learning as much as she can about their unique situations and needs,” said Alyssa Sharkey, a lecturer in SPIA and a senior consultant for UNICEF. “This is reflected both in her chosen field of study at Princeton (medical anthropology) but also [in the] work and volunteer activities she has undertaken."

Drawing on these experiences, Corcoran will launch programming for asylum seekers, and particularly survivors of human trafficking and modern slavery, based around photography, expression and meditation. Art and storytelling will serve as modes of self-expression, processing and community building, and emphasize the voices of participants who will have the opportunity to publicly share their work and, in turn, humanize the refugee crisis in Cyprus.

The guidance of local community leaders will ensure that the program offers comprehensive resources addressing ever-changing challenges in the region. “In taking a trauma-informed approach, I aim to address one of the most trying crises of the 21st century by attending to the individual needs of some of the people caught in its wake,” she said.

“Fernanda’s commitment to social justice issues is representative of her deep humanitarianism and sustained interest in building a more equitable hemisphere,” said Robert Karl, a professor of arts and humanities at Minerva College, who worked with Romo Herrera Ibarrola at the Princeton Asylum Project, a partnership between Princeton’s Office of Religious Life and Catholic Charities Community Services of the Archdiocese of New York.

Romo Herrera Ibarrola will bring this ethos of equality to the Corner Institute, a rural community organization in Malinalco, Mexico, where she will work to expand its grassroots transparency initiative to remote rural districts. The institute’s method is aimed at empowering community members with reliable information in an effort to reduce and prevent the kinds of corruption and abuses of authority that they are particularly vulnerable to. To that end, Romo Herrera Ibarrola will be creating accessible informational materials and conducting workshops.

“I [will] be returning to my home country of Mexico with the opportunity to engage in a truly worthwhile project that would significantly improve people’s lives,” she said. “My personal experience as someone who has spent the last few years navigating the United States and interacting with the migrant experience in this country will make me a valuable asset to an organization that deals with the complications at the margins of the immigration system, and with people who have been touched by U.S.-Mexico migration in different ways.”

Ruggiero will be working with Projeto Cravinas, a sexual and reproductive legal rights clinic that is registered as an extension of the University of Brasilia Law School. Her research will center around maternal mortality during both the Zika epidemic and COVID-19 pandemic. “Projeto Cravinas is working with and collecting a constellation of individual cases that show that these maternal deaths are strongly related to flagrant human rights violations,” she said. She will collect and organize international jurisprudence and translate documents, as well as take courses in relevant topics as a student at the law school.

Ruggiero has a deep interest in sexual and reproductive rights. Her senior thesis examined how diminishing access to maternity care services in Trenton, New Jersey, has affected maternal health outcomes over time. She also interned at Child Family Health International, which supports community health initiatives globally, and International Planned Parenthood Federation Western Hemisphere Region, where she co-authored and published a report that redefines the World Bank’s criteria for resource distribution between countries to better support sexual and reproductive health and rights.

“Both litigation and academic research appeal to her, as does a career as a policymaker,” said Marcelo Medeiros, visiting professor of economics. “Projeto Cravinas’ training will certainly serve her well, as she will sharpen a wide array of professional skills related to research, writing, strategic litigation and making policy recommendations.”

Ruggiero is also earning certificates in global health and health policy, and Spanish culture and language. She has served as co-captain of the women’s varsity squash team for the 2021-22 season.

Shifrin will return to Jerusalem, where she spent a gap year, to study spiritual healing practices through four intersecting apprenticeships in healing — in Torah study, yoga, mindfulness facilitation and Kabbalah (Jewish mysticism). She will write songs resulting from those apprenticeships, culminating in the creation of a peace album in collaboration with Israeli and Palestinian musicians. “Music holds endless capacity to transform even the greatest suffering,” she said.

Shifrin has found respite in the spiritual healing arts, and said she is eager to learn more and share with others. Her fellowship project is an extension of her senior thesis, an ethnographic analysis of the relationship between trauma, healing and spirituality among Anglo-born Neo-Hasidic Jews in Jerusalem. Shifrin is considering post-graduate degrees in Rabbinic studies, music and clinical psychology and hopes to use her platform to forward Israeli-Palestinian peace activism and the inclusive, spiritually engaged, Neo-Hasidic, queer, feminist Judaism that she practices.

“Naomi is a shining light in the world, radiating her faith through her active engagement in activities that benefit others and her commitment to social justice,” said Kim Lane Scheppele, the Laurance S. Rockefeller Professor of Sociology and International Affairs.

Shifrin is earning certificates in the Center for Human Values and African studies, and is assistant music director of Koleinu, Princeton's Jewish a cappella group. She was also a Bridge Year Fellow in Dakar, Senegal, and a Yahel Social Change Fellow in Lod. She serves as a residential college adviser in Mathey College.

Aspiring doctor Walker will partner with Humans for Humanity, an NGO that provides sustainable menstrual health education and products. She will conduct in-person observations and face-to-face interviews with their volunteers, workers and the menstruators they serve, culminating in a Hindi-language booklet to be placed in the menstrual health kits.

“The recent shift specifically towards more sustainable, eco-friendly and equitable menstruation practices may be indicative of further changes elsewhere as sustainable product production and usage becomes paramount in the face of worldwide population growth and global warming,” she said. “With India’s continued economic development and its placement as one of the world’s most populous countries, it’s key to understanding global conceptions of menstrual health.”

Previously, as part of her senior thesis, Walker explored how Indian NGO's combat historically and religiously constructed stigmas and taboos regarding menstruation for the purpose of increasing menstrual education.

“Methodologically, her project is a well-conceived study of interactions between NGO workers and the people they serve, investigating points of collaboration and tension, for the purposes of fostering greater inter-and-intra-cultural understanding,” said Christina Collins, formerly a lecturer in the Department of Anthropology at Princeton and now assistant professor of anthropology at Indiana University-Bloomington.

Walker is also earning certificates in global health and health policy, African American studies, and gender and sexuality. She served as the Women’s Rugby Club president from 2019 to 2021.