Princeton University has established a strategic partnership with the University of São Paulo that will offer faculty and students at both institutions increased access to research and learning opportunities across disciplines and across borders.

The move comes on the heels of the signing of a similar agreement with Humboldt University in Berlin, and Princeton also is finalizing an agreement with the University of Tokyo. The University is establishing these strategic partnerships with peer institutions around the world as it continues its internationalization efforts, outlined in the 2007 "Princeton in the World" report. These strategic partnerships are in addition to the many institutional relationships that Princeton already has in place including faculty fellowships, student exchanges and study abroad programs. 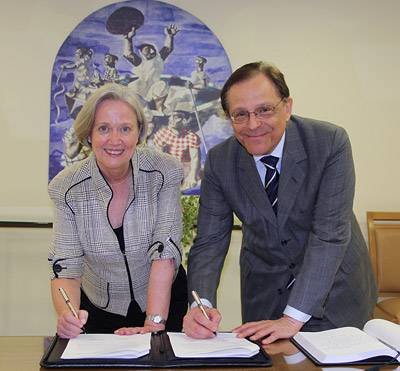 Jeremy Adelman, director of Princeton's Council for International Teaching and Research and the Walter Samuel Carpenter III Professor in Spanish Civilization and Culture, was among those on the trip and has helped develop the framework for the strategic partnerships.

"With a strategic partnership, having more resources and staff allows faculty and students to enhance their projects, making it easy to flow across borders and incubate ideas and initiatives," Adelman said. "A department, program, institute or school can step forward with exciting initiatives that both institutions will support."

An international memorandum of understanding governs each strategic partnership, and a joint governing committee comprised of faculty and senior staff from both institutions will seek out and review project proposals. The proposals must be reciprocal academically and geographically, with academic units from both universities participating and a flow of people to both countries.

Adelman emphasized, however, that each partnership will be shaped by individual faculty initiatives.

"The University is helping to choose the locations, not the content. This allows faculty to adapt and contour their initiatives according to where the frontiers of discovery are moving," he said. "Princeton's model is true to Princeton's personality. We're building on who we are. At the same time, by bringing partners in, we're imagining ourselves beyond national boundaries."

Adelman said that, in identifying partner institutions, the members of the Council for International Teaching and Research looked for trends in the academic interests of faculty, graduate students and undergraduate students across disciplines. For instance, departments in the humanities and physical sciences have strong ties to institutions in Berlin, and Princeton launched a dual-Ph.D. program — its first — with Humboldt University in May. Tokyo is a hub for scholars in East Asian studies, the astrophysical sciences department and the Woodrow Wilson School of Public and International Affairs.

The first group of partnerships also allows Princeton's faculty and students to gain access to resources not available on campus. For instance, the University of São Paulo has a medical and public health schools, a diverse urban setting and a field station in the Amazon basin.

Professor João Biehl, co-director of Princeton's Program in Global Health and Health Policy (GHP) and the Susan Dod Brown Professor of Anthropology, who also joined the Princeton delegation, has outlined and received funding for a pilot program with the University of São Paulo in the areas of global health and medical anthropology. The proposal includes student research opportunities in Brazil around the social determinants of health, care delivery, natural sciences and health policy, medical humanities and the history of global health initiatives; student exchanges between schools for research and study abroad; conferences; joint research projects involving faculty and students; co-taught classes; and advising and mentoring of students across institutions.

"The University of São Paulo is world-renowned for its strengths in social science and medicine, preventive medicine, public health, and cutting-edge and applied basic science," said Biehl. Initiatives will be developed in conjunction with Princeton's Department of Anthropology, the Center for Health and Wellbeing in the Wilson School, and the Program in Latin American Studies.

Biehl added: "In the context of Brazil, a middle-income country that is highly influential in the global sphere and closely watched in the health policy arena, it offers the opportunity for Princeton's young scholars to directly observe topics central to the GHP curriculum and to their studies in anthropology and at the Woodrow Wilson School, such as the social markers of difference and health disparities, and debates around treatment access and the principles and practicalities of Brazil's constitutional right to health. The program will cultivate a vibrant and multilayered scholarly community, bringing together members of each university from across generations for sustained pedagogical and collegial exchange."

One of the faculty members at the University of São Paulo who will be participating is Lilia Schwarcz, a prominent writer, historian and anthropologist who has been a Global Scholar at Princeton for two years and was previously a visiting professor. Said Schwarcz: "The agreement is an umbrella that opens up space for new ideas. Every time you go [to the partner institution], it's easier. As you become more familiar with it, you can create new opportunities."

Another pilot project focuses on architecture and urbanism in coordination with the University of São Paulo. Adelman said that he hopes that the pilot programs will serve as models to help faculty imagine the type of partnerships that are possible.

Adelman said that the University is also thinking about ways to engage countries or regions in the developing world that may not have the same resources for strategic relationships that the partners in Brazil, Germany and Japan do. In Africa, for instance, Princeton may have multiple partners, partner with a foundation or form a network.

"This spring we hope to come out with a model for Africa that works for the other parts of the developing world where institutional capacity isn't the same, where the University should be thinking about capacity building," Adelman said.