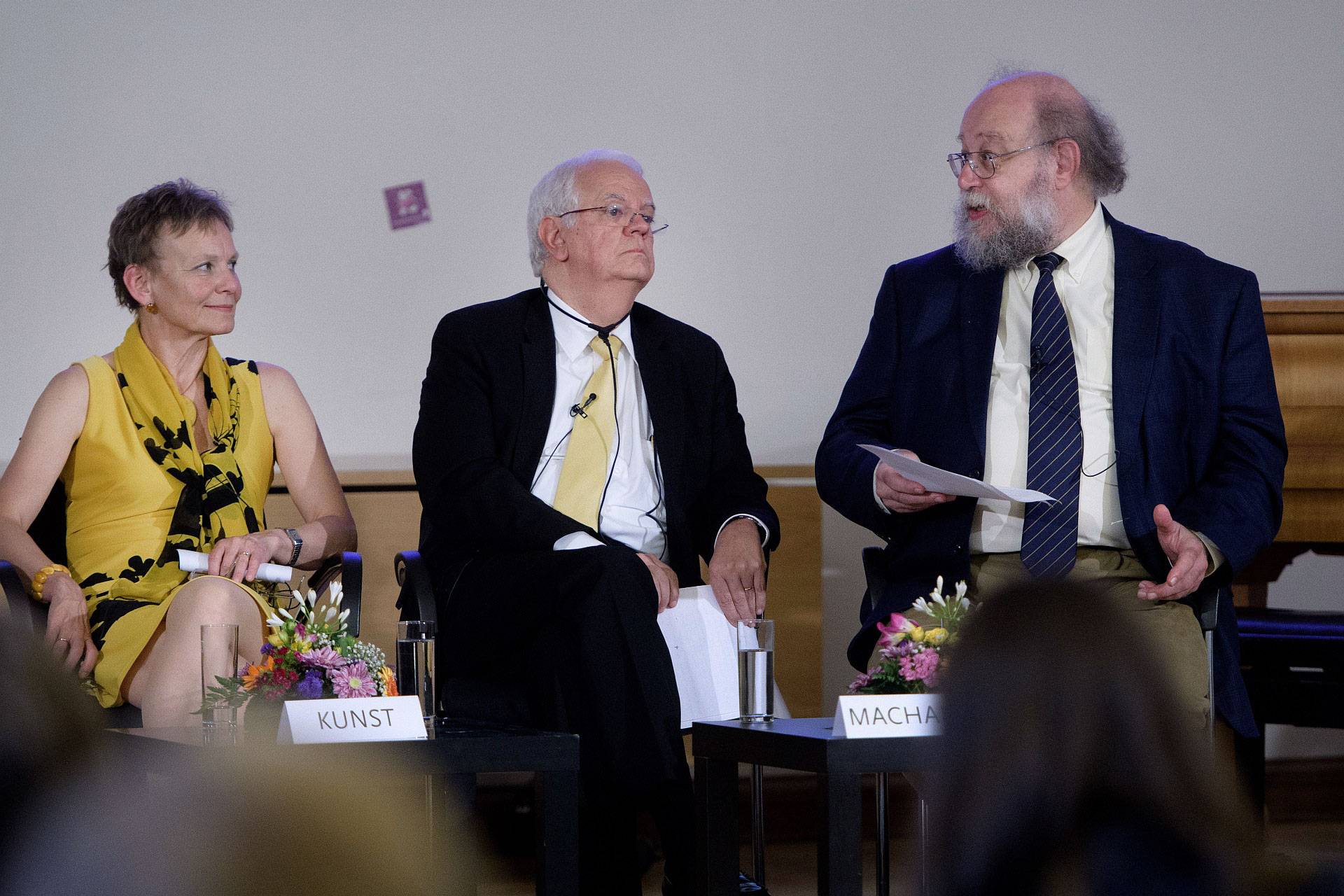 Princeton University has signed a five-year renewal of its strategic partnership with Humboldt University in Berlin to support research and teaching collaboration spanning the disciplines. In June, Dan Garber, the A. Watson Armour, III, University Professor of Philosophy at Princeton (right), participated in a panel as part of the celebrations around Humboldt's 250th anniversary. From left are Humboldt President Sabine Kunst and Raul Machado Neto, provost for international cooperation at the University of São Paulo.

Princeton University has signed a five-year renewal of its strategic partnership with Humboldt University in Berlin to support research and teaching collaboration spanning the disciplines.

Princeton President Christopher L. Eisgruber and Humboldt President Sabine Kunst signed the memorandum of understanding on March 19 in Berlin. Eisgruber was in Berlin to participate in the Princeton-Fung Global Forum on liberty and privacy in the digital age, which included faculty from Humboldt as well as logistical support from Humboldt staff.

“Strategic partnerships such as the one with Humboldt enhance the global scope of the University’s teaching and research mission in very meaningful ways," said Anastasia Vrachnos, vice provost for international affairs and operations. "This is evident in ongoing collaborations between our two institutions, joint publications, and the continued flow of scholars and ideas that is so vital to inquiry and to enriching our campus.”

Vrachnos said that the renewal of the partnership was based on successful project outcomes and ongoing interest of both faculties; a commitment to building on research and curricular gains; and an ongoing expansion of faculty networks along with administrative support.

The newest proposals to receive funding for 2017-18 are:

• "Contesting and Converging Stories of Global Order: Regional and National Narratives, led by Jeremy Adelman of Princeton's Department of History and Andreas Eckert of Humboldt's Institute of Asian and African Studies;

• "Practical Normativity: Reasons, Morality and Rationality" led by Michael Smith of Princeton's Department of Philosophy and Thomas Schmidt of Humboldt's Institute for Philosophy.

"The University's strategic partnership with Humboldt University was one of its first and remains one of its most successful," said Ed Turner, a professor of astrophysical sciences who is director of the Council on International Teaching and Research at Princeton.

"It has prompted and supported a remarkably powerful set of joint research and teaching initiatives between Princeton and Humboldt faculty across an extremely diverse set of departments and disciplines and provides a firm anchor for our academic and scholarly connections to central Europe," Turner said. "It is a model for a successful international strategic partnership."

To date, Princeton's partnership with Humboldt has funded 23 proposals including departments such as classics, electrical engineering, German, history, molecular biology, neuroscience, philosophy, and the Woodrow Wilson School of Public and International Affairs.

The collaboration has led to publications and research progress in each of the participating fields, and has paved the way for international opportunities for undergraduate and graduate students as well as innovative teaching arrangements. For example, philosophy seminars alternating between Princeton and Humboldt are providing graduate students in particular the opportunity to expand their networks. 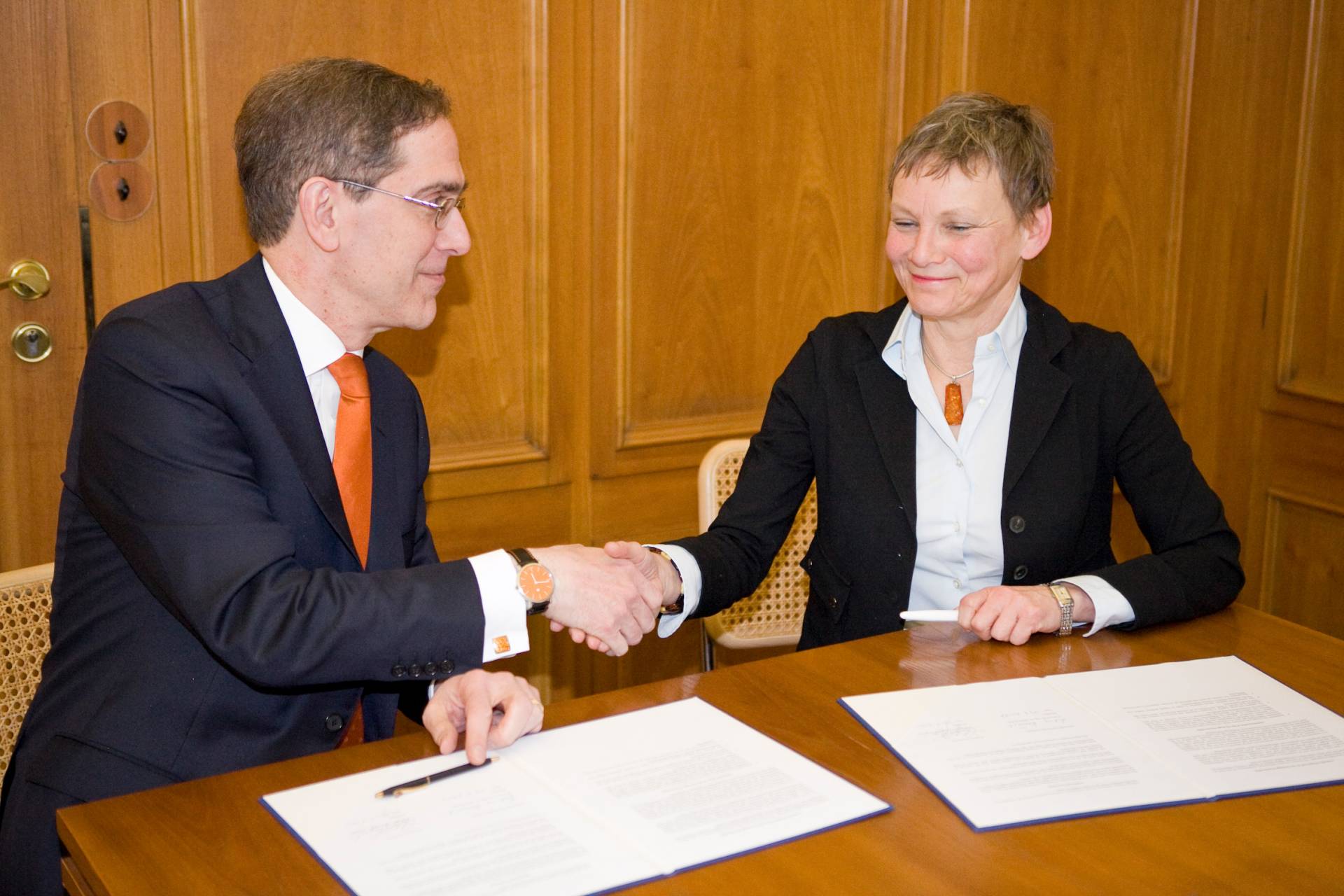 Princeton President Christopher L. Eisgruber, left, and Humboldt President Sabine Kunst signed the memorandum of understanding on March 19 in Berlin. Eisgruber was in Berlin to participate in the Princeton-Fung Global Forum on liberty and privacy in the digital age, which included faculty from Humboldt as well as logistical support from Humboldt staff.

"The philosophy department has built an especially close relationship with our colleagues at Humboldt, particularly in the areas of the history of philosophy and ethics," said Dan Garber, the A. Watson Armour, III, University Professor of Philosophy. "We have organized seminars together, taught joint classes, and had numerous visits of both students and faculty in both directions, to the benefit of all. I think that it has been especially good for the students to build bridges to other intellectual communities, and see how things are done elsewhere."

Garber attended Humboldt's 250th anniversary celebration in June and participated in the panel "Wilhelm von Humboldt in the World Today."

"It was a great pleasure to meet our partners at the Humboldt, see some of the wonderful work that is being done there, and discuss deepening our already close relationship," Garber said. "But it was also a pleasure to meet some of their other partners, and better appreciate the international network of scholars and scientists in which Princeton participates."

Among ongoing Princeton-Humboldt projects is one spearheaded by Simon Levin, the James S. McDonnell Distinguished University Professor in Ecology and Evolutionary Biology, on exploring the cooperation and collective cognition in human and animal systems. A workshop on the topic was held at Princeton in May.

"The Princeton partnership with Humboldt provides a wonderful opportunity not only for us to interact with the excellent Humboldt University scholars, but also to provide a focus for bringing together Princeton faculty and students who would not otherwise be interacting," Levin said. "Our joint interests in the uncertainty associated with environmental change, and how social contexts help to shape our perceptions of these risks, has brought together a broad group of researchers at both institutions, and we look forward to highly productive interactions." 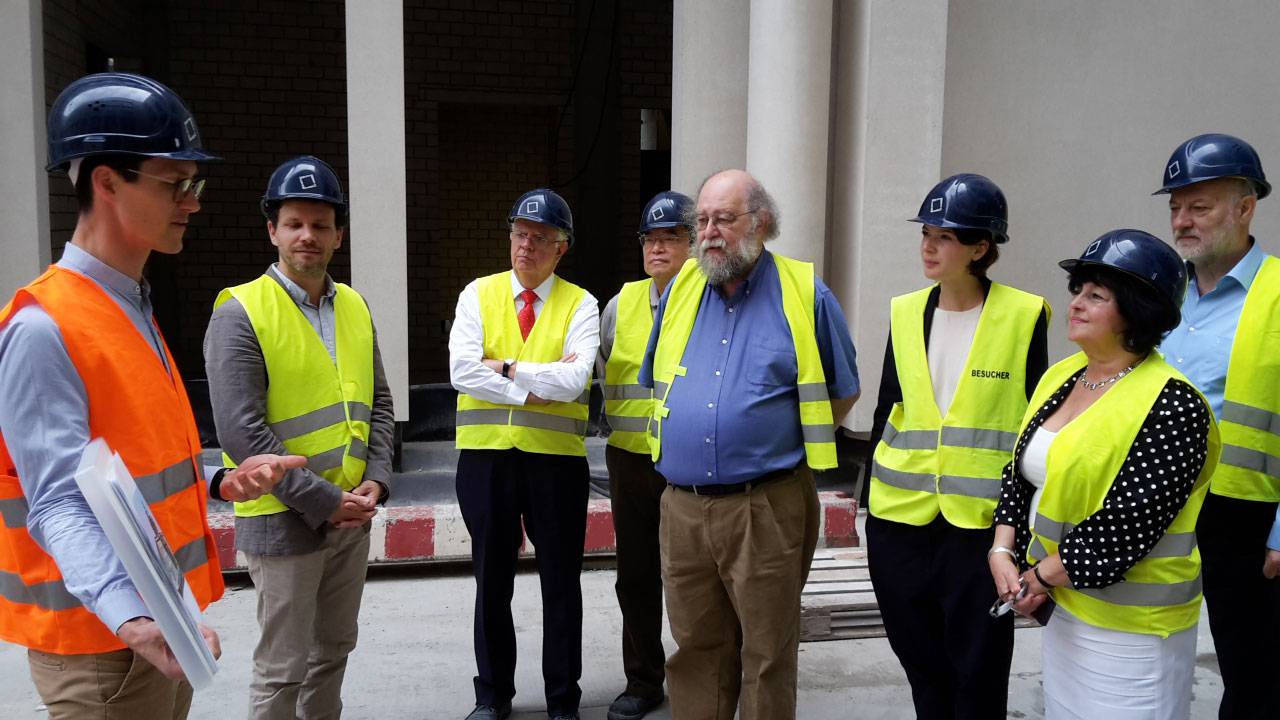 Garber, center, joins a visit to the building site of the Humboldt Forum, a new public museum complex that will offer exhibition space to nearby Humboldt.