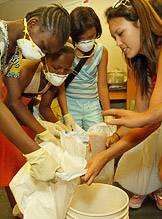 Children who were once refugees recently spent a day at Princeton conducting experiments and touring the campus. The activities were part of a six-week summer program run by the International Rescue Committee in which members of Professor Wole Soboyejo's research group are participating. From left, in an experiment set up by the group, Hawa Sanogo from Congo, Nene Abdullaye from Guinea and Dolma Dolma from Tibet mixed clay and sawdust together with the help of Kyrra Richards, an International Rescue Committee teacher. The mixture they created ultimately was fashioned into a ceramic water filter. When the filter was fired in a kiln, the sawdust burned away, leaving behind tiny holes in the clay through which water could pass, but most bacteria could not. (Photo: Frank Wojciechowski)

Through a partnership with Princeton engineers, children who once lived in refugee camps are learning about science and engineering as they design clay water filters and solar energy cookers. Addressing problems of clean water and affordable energy that they experienced first hand, the students also are gaining insights into the higher education process in the United States.

The students are participants in a youth summer program run by the International Rescue Committee, a nonprofit organization that helps people who have suffered from natural disasters and political strife.

"We want the students to see that science and engineering are not intimidating, but areas of endeavor where, if you're motivated, you can do things that not only help you learn, but also make an impact," said Wole Soboyejo, professor of mechanical and aerospace engineering. "At the same time, I think we can inspire them to achieve their academic dreams and life goals without feeling constrained by their refugee status or financial resources."

Members of Soboyejo's research group are teaching some 50 participants in the six-week program every Wednesday afternoon at Marymount Manhattan College. The students also visited the Princeton campus on July 25. The work of the Princeton volunteers is sponsored by the U.S.-Africa Materials Institute, which Soboyejo directs, and organized by Tiffany Tong, a graduate student in electrical engineering.

The high school students, led by Tong, are conducting experiments related to the design of solar cookers, which are intended to replace traditional cooking fires in places where gathering wood is difficult or environmentally harmful. The middle school students, guided by mechanical and aerospace engineering graduate student Ismaiel Yakub, are exploring designs for a water filtration system that uses locally available clay to remove contaminants.

"We try to break down the explanations and definitions as much as possible," Tong said. "I've been really impressed with all of the students, and their willingness and eagerness to learn and participate."

Roughly half of the students in the program have been in the United States between one and three years, hailing mainly from Sierra Leone, Liberia, Guinea and Togo. The other half arrived within the last year, primarily from Burma, Nepal and Iraq. Depending on the amount of time spent in refugee camps and conditions in their home countries, the students' previous educational experiences vary widely. 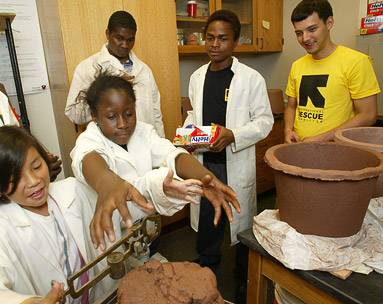 From left, Chemi from Tibet and Fatoumata from Mauritania reached for a lump of clay after determining its mass. They then used a hydraulic press to form the clay into a ceramic water filter. The group, also including (back row, from left) Abdoul from Guinea, was guided by Princeton graduate student Ismaiel Yakub and visiting undergraduate student Kyle Carlson from the University of Iowa. (Photo: Frank Wojciechowski)

As part of their July 25 visit, the students were welcomed to the University by Vice President for Campus Life Janet Dickerson before heading off for tours and hands-on activities. The high school students toured the campus and visited the Imaging and Analysis Center in Bowen Hall. The middle school students spent time in Soboyejo's lab in the Engineering Quadrangle, working under the guidance of graduate students to fashion ceramic water filters.

Ida, a 13-year-old refugee from Togo, was eager to get her hands on the clay.

"I've never been in a lab before," she said, adding with a grin, "It makes me think I like science."

"Without this partnership, these kids would never have the opportunity to see, touch and feel this type of equipment," said Elizabeth Demchak, education services officer for the International Rescue Committee. "And, in a regular science class, students don't have the opportunity to learn from true scientists. Now, the students are learning how science is used in everyday life. They're also able to see the diversity of the Princeton students and faculty, which gives them role models they can identify with in terms of gender, age and ethnicity."

Take Abdoul Diallo, for instance. He entered the United States in 2006 as a refugee from Guinea with little formal science education. After participating in the Rescue Committee's program last year, he is now one of two "leaders in training," helping current students adjust to the program and often serving as a translator for the newest arrivals. 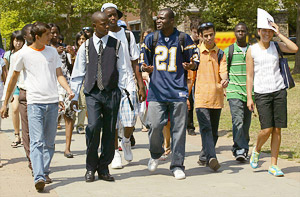 "When I came here, I didn't understand English," he said. "But now I'm working with scientists from Princeton. When I see African scientists doing well here, I want to work like them and be like them."

During their visit to the University, the Rescue Committee students also attended a panel discussion titled "The Road to College: Former Refugees Discuss Their Journeys to Princeton and Share Tips on How to Get to College." As part of the panel, electrical engineering graduate student Ekua Bentil, 2007 graduate Loan Le and rising junior Abass Mohamed shared their experiences as refugees who are from Ghana, Vietnam and Somalia, respectively. They were joined on the panel by undergraduate admission officer Joseph Ramirez, a 2007 Princeton graduate, who explained the college admission process and answered students' questions. The conversation was moderated by Stephen Friedfeld, associate dean of graduate affairs in the School of Engineering and Applied Science.

"One of the spectacular things for me to learn as a Nigerian was that the U.S. is a meritocracy," Soboyejo told the students at the panel. "It doesn't matter if you're from Asia, Latin America or Africa. If you work hard, you can be whatever you choose to be."

After the panel, the day concluded with a soccer game for program participants and organizers in Princeton Stadium.