Princeton engineers Edgar Choueiri and Winston (Wolé) Soboyejo are engaged in efforts to reinvigorate once-flourishing scientific cultures in their home countries of Lebanon and Nigeria, respectively. Among Soboyejo's projects is an initiative to develop a bamboo frame that can be strapped to a camel's hump so they can carry refrigerated vaccines to people in remote regions of Kenya and Ethiopia. 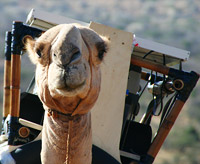 The stories that Edgar Choueiri and Winston Soboyejo tell of their native countries and of their own careers are strangely similar.

Choueiri got hooked on rocket science in Lebanon, where as a boy growing up during the Apollo era he blasted toy rockets into the sky and watched them climb furiously then arc back to Earth. His favorite, one that got its thrust from pressurized water, would inspire him decades later in his research as a rocket scientist.

Soboyejo traces his love for science and engineering to Nigeria, where as a teenager he attended his father's lectures at the University of Lagos and learned from engineers at his father's engineering firm as they designed the tallest skyscrapers in the country's largest city.

These two Princeton engineering professors came from societies where science blossomed for a time and then atrophied. Both left their native countries to earn their scientific credentials. And now both men find themselves drawn home again to give something back to the societies where they were first inspired.

"For a long time, you bust your guts to prove yourself and don't have time to really think about anything else," said Soboyejo, sitting in his office down the hall from Choueiri's in Princeton's Department of Mechanical and Aerospace Engineering. "Then you reach a stage in your career where you have more freedom to ask 'What now?' For me, Nigeria had a very strong pull."

Recently their respective efforts to reinvigorate once-flourishing scientific cultures have taken root. Last summer, the Lebanese Academy of Sciences, a learned society formed in 2007 to bolster scientific enterprise in that nation, held its first meeting in Paris. At the meeting, Choueiri, who played a key role in founding the academy, was elected its first president.

Soboyejo, who is known by students and colleagues as Wolé, also attended a gathering of minds last year. At Princeton last fall, he hosted the first meeting of the African Renaissance Initiative of Science and Technology, or ARIST, a nonprofit organization founded to foster science and technology education in Africa. The conference gathered top African academics to discuss how to train the next generation of people to address pressing problems facing the continent.

Soboyejo co-founded the organization with other scientists in Africa and abroad to counter what he sees as a historic brain drain from Africa when the need for people equipped with problem-solving skills is growing. 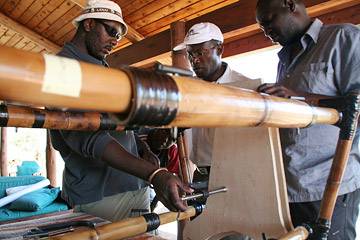 Volunteers work on a platform designed by Soboyejo to carry medicine on the backs of African camels. (Photo: Tiffany Tong)

In Soboyejo's native Nigeria, universities flourished in the middle of the past century. The British ruled the country until 1960, and brought with them a European-style education system. While British rule had its down side, Soboyejo credits the British-run schools for training students of his parents' generation for scholarly careers and with bolstering Nigerian universities. "The people who emerged from that era had solid academic preparation at the primary and secondary levels," he said. "They were an exceptional group."

Many of those students went on to study at foreign universities to become scholars, scientists and engineers, then returned to work at Nigeria universities in the 1960s and 1970s. "It was sort of a utopian environment," Sobojeyo said, adding that Nigeria's first Nobel Prize winner, the writer Wole Soyinka, was a product of this era.

Soboyejo followed this model himself, attending a British preparatory school, and then earning a bachelor's degree in engineering from King's College London and a doctorate in materials science from Cambridge in 1988.

Nigeria's intellectual boom, however, was short lived, he said. Beginning in the late 1970s, political support for Nigerian universities, which were government funded, began to wane. "There was great hope at the universities, but there was little experience in managing talented people," Soboyejo said. "Academics failed to connect their work to society, and the leaders began to question why society should support them."

The problem was compounded by a sudden drop in the price of crude oil, Nigeria's major export, and the abrupt devaluation of its national currency in 1986. As a result, the economy flagged and the government made deep cuts to university budgets. "You can imagine someone suddenly making a tenth of their previous salary," Soboyejo said. "The academics with connections abroad left. It had devastating effects on the universities."

Now, decades later, the older generations of scientists and engineers in Nigeria and other parts of Africa are retiring, further draining the continent of well-trained academics and professionals.

Soboyejo said it couldn't come at a worse time. Africa suffers from many problems that can be addressed by scientists and engineers, he said, but Africans can't rely solely on outside help. He noted that in recent years life expectancy has decreased in many African nations, which cannot be accounted for solely by the ongoing HIV/AIDS epidemic.

The decline stems from a range of problems, he said, from economic issues, such as a lack of businesses and universities that produce technological innovations and good jobs, to a lack of access to basic services such as health care and safe drinking water.

Soboyejo works on several initiatives aimed at improving conditions for Africans. In 2003, he founded the U.S./Africa Materials Institute, an organization focused on providing African researchers access to facilities and resources to conduct materials science. In 2007, he was elected to the Nigerian Academy of Sciences. As part of Princeton's Grand Challenges program, he is working with the Bronx Zoo to develop a bamboo frame that can be strapped to a camel's hump so they can carry refrigerated vaccines to people in remote regions of Kenya and Ethiopia.

"You can't get to some areas by Jeep," he said. "You really need a camel."

He hopes ARIST, his initiative to bring academics from different African countries together, will strengthen existing universities and generate new programs to train the next generation of scientists and engineers to address Africa's particular problems. "If you have a strong scientific culture," Soboyejo said, "you will develop smart people who will have an impact on society." 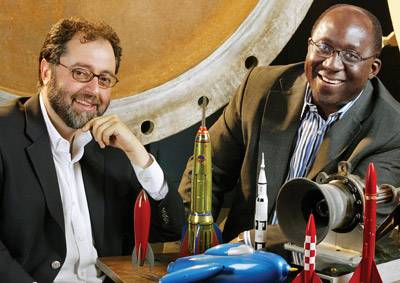 Choueiri (left) and Soboyejo, professors of mechanical and aerospace engineering, have been drawn back to their respective homelands of Lebanon and Nigeria to help develop scientific communities in the countries where their love of science and engineering was born. (Photo: Frank Wojciechowski)

Putting Lebanon back on the scientific map

Soboyejo's colleague, Edgar Choueiri, another professor of mechanical and aerospace engineering, also sees the rational thinking and problem-solving skills that underpin science as tools for laying strong foundations for society.

"Wolé is further along in helping his country than I am," Choueiri said. "I saw what Wolé was doing, and it sparked a feeling that maybe I could do something."

Though it boasts an extensive university system and education is highly valued in Lebanese culture, Lebanon is still recovering from a civil war that lasted from 1975 to 1990 and drove many Lebanese scientists abroad. "After 15 years of civil war it's hard to convince young people to go into science. They see it as idealistic," Choueiri lamented.

Choueiri comes from a family of science-minded people. His mother was a science teacher and his father an engineer, both educated before Lebanon's civil war. He was heavily influenced by the space race. "I grew up during the Apollo program and all of my toys were rockets," he said, laughing. "That's still true now. I just got a grant from the U.S. Air Force to work on a plasma rocket that can use water as a propellant."

Choueiri earned a doctorate in plasma science from Princeton in 1991 and now directs the University's Electric Propulsion and Plasma Dynamics Lab and the Engineering Physics Program. In 2004, he was selected to lead a team of NASA and academic researchers on a project to develop a high-power plasma rocket system for the robotic and human exploration of the moon and Mars. 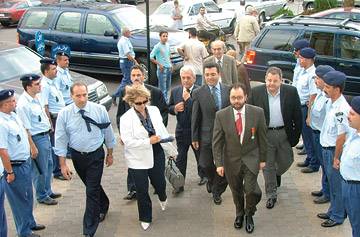 Choueiri (in red tie) prepares to meet with the governor of Tripoli, Lebanon, the day after he was knighted by the president of Lebanon in 2004 in recognition of Choueiri's contributions to the fields of astronautics and spacecraft propulsion. (Photo: Courtesy of Edgar Choueiri)

He said Lebanon's current lack of scientific muscle is a particular shame given its proud history of innovation and exploration. The area that comprises present-day Lebanon was once home to the Phoenicians, an ancient sea-faring people who brought the first paper, Egyptian papyrus, to the Greeks. They also developed and spread the early alphabet that is the direct ancestor of the modern alphabets of Romance languages.

The region came under French control after World War I, then received its independence in 1943. During times of peace, Lebanon's Mediterranean climate and diverse culture has drawn tourists from all over the world -- Beirut, the capital, is nicknamed "Paris of the East." The small country, which is roughly the size of Connecticut with a population of only 3 million, boasts more than 41 nationally accredited universities.

Despite all of this, Choueiri said, the civil war and the ensuing flight of Lebanon's intelligentsia left the country with scarce scientific resources. "You're never going to be equal partners with other producers of science and technology if you don't innovate," he said. "You will never call your own shots."

In recent years, Choueiri said, Lebanon has shown a renewed interest in rebuilding its academic and research institutions. The new academy is modeled on the French Academy of Sciences, and Choueiri hopes to bring what he's learned in the United States to the task of creating a thriving community of researchers. It's no accident that the academy's emblem is based on the shape of the ships that carried Phoenicians abroad and home again as they explored the ancient Mediterranean. The members of the academy hope to leverage the knowledge and connections of Lebanese academics living outside the country.

"Lebanon has produced a mind-boggling wealth of smart people," Choueiri said. "Almost every field of science has among its superstars Lebanese expatriates or people of Lebanese origin, but they are spread all over the world. The goal is to put Lebanon back on the map as far as scientific research. One way to do this is to rely in part on ex-pats."

The academy has a number of goals. They include bolstering scientific research and educational programs, encouraging Lebanese students to consider careers in the sciences and promoting research relevant to societal issues, such as Lebanon's economy, public health and the environment.

In addition to the obvious economic benefits of having a thriving science and technology sector, Choueiri also sees the rationalism of scientific culture countervailing the rise of fundamental extremism in the Middle East. "Teaching people to think rationally, to question the world around them, is an antidote to problems not only in the Middle East, but around the world," he said. "We all benefit if countries like Nigeria and Lebanon contribute to acquiring knowledge."

Choueiri elected president of the Lebanese Academy of Sciences