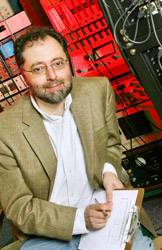 Edgar Choueiri, a Princeton University professor of mechanical and aerospace engineering, is working to push the boundaries of sound reproduction through his 3-D Audio and Applied Acoustics Lab.

In his laboratory tucked into the basement of Princeton University's Von Neumann Hall, Edgar Choueiri creates illusions with sound. He can conjure a distant trumpet or a voice whispering in your ear, but when you turn around there is nothing there.

"[Author] Arthur Clarke said any technology, if sufficiently advanced, appears to be magic," said Choueiri, a professor of mechanical and aerospace engineering.

In recent years, Choueiri has become known for making magical advances through high-tech sound. His BACCH system, which produces 3-D sound from a pair of ordinary speakers, can create the sound of a buzzing fly circling your head so realistic that the urge to swat is almost irresistible.

Now, Choueiri is expanding his research with support from Sony Corp. In a three-year effort, his team will seek to push the boundaries of sound reproduction and create a sound space so realistic that it can be used as a basis for virtual reality.

"Imagine sitting on a beach, plugging your earphones in your MP3 player and on top of the waves, you have a choir," he said. "Or walking down the street and having your favorite band walking along with you."

As part of the effort, the School of Engineering and Applied Science has allocated additional space to Choueiri's 3-D Audio and Applied Acoustics (3D3A) Lab, roughly doubling the space available for the research.

Choueiri's project breaks down into multiple efforts that examine ways to improve spatial sound fidelity and to establish standards for future recording technology.

In one, the research will concentrate on producing a sound stage in headphones that has the same spatial depth and extent as that produced by external speakers. Even the best commercial headphones now produce sound that appears to be in the listener's head or just outside the ears. The reason for this is that in normal conditions, sound waves are affected by a person's head and torso before they reach the ears, and headphones (or earphones) do not properly re-create this interaction, which provides the brain with the cues it needs to perceive the sound coming from outside the head.

"To externalize sound with headphones, you have to fool your brain," Choueiri said. "There is a technique for doing that, but it requires that I know the characteristics of your head."

Right now, acousticians can reproduce externalized sounds in headphones by using detailed acoustics measurements to create a numerical representation of a user's head called the Head-Related Transfer Function, or HRTF. Sound that has been processed according to this technique would work only for the person whose head was used to obtain the measurements. One of tasks facing Choueiri's team is to create a digital filter that allows for externalizing the sound without relying on cumbersome and time-consuming HRTF measurements.

"Luckily, to simulate with headphones the sound of two external speakers, all you need is a small subset of the full HRTF of an individual," Choueiri said, "and we think we can develop a simple method that allows obtaining this subset for an individual without the need of any measurements so that any user can easily and quickly calibrate a set of headphones to reproduce external sound."

Accurate and full 3-D sound reproduction with headphones is more demanding than just simulating the sound of external speakers, as it requires the full HRTF of an individual. Choueiri and Szymon Rusinkiewicz, an associate professor in the computer science department, are teaming up to work on this problem. "HRTF is like an ID card for your head," Choueiri said. "We have some ideas on how to use 3-D graphics technology to measure that."

The goal is to allow a user to snap a picture of his or her head from a computer tablet or a gaming console while, behind the scenes, the computer rapidly calculates the user's HRTF. The computer can then load a 3-D sound filter, like the BACCH system, to create 3-D sound tailored for the user.

"Once we can individualize a sound system to a listener, the sound quality can be much higher, especially the spatial fidelity," Choueiri said.

The most futuristic aspect of the research involves the creation of an accurate 3-D sound space — an audio virtual reality — for listeners. Essentially, the technology would allow engineers to place a special spherical microphone anywhere in a room and then let a listener at some remote location use a joystick or some other computer interface to navigate the sound field as if walking through the area.

"A listener can navigate the entire room, in real time, all from the same microphone," he said.

Choueiri has long been an amateur sound recording engineer, but he began researching the science of sound relatively late in his career. An expert in plasma physics, he is leading an effort to develop plasma propulsion for spacecraft. Since 1996, he has been heading the Electric Propulsion and Plasma Dynamics Lab (EPPDyL) — just a few steps and a heavy doorway away from his sound lab — where he has been conducting spacecraft propulsion research for NASA, including a three-year effort to develop a high-powered plasma rocket system for future missions to Mars.

The development of his sound lab was originally supported through the engineering school's Project X funding, which is designed to allow faculty members to pursue unconventional ideas including those outside their primary field.

"The substantial support that Edgar is now receiving from Sony exemplifies the surprising innovations that can emerge when experts are given the freedom to explore and cross disciplines," said H. Vincent Poor, the dean of the engineering school.

Toshimoto Mitomi, a senior vice president for innovation and technology at Sony, said one of the great attractions of Choueiri's research is its essential simplicity. The theoretical work Choueiri's team is performing is difficult, but it could be easier to transform into working devices than other research efforts.

"Some companies try to provide the same sound effect, but it is more complicated," Mitomi said. "There is a better chance for his technology to be implemented in many services."

Choueiri said that "simplicity in engineering design is always a desired goal when it is possible."

"Simplicity often translates into reliability, low cost, ease of implementation and ease of use," he said. "Humans also tend to resonate aesthetically with objects whose design is simple."