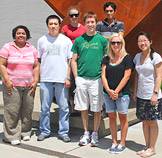 Michelle Waddell (far left), a chemistry professor at Hampton University, was one of three visiting junior faculty paired with Princeton engineering faculty this summer as part of the Leadership Development Institute, a National Science Foundation-supported program to boost science, math and engineering education and research at historically black colleges and universities. Waddell worked with Robert Prud'homme, a Princeton professor of chemical and biological engineering, and is seen here with Princeton students from Prud'homme's lab.

As an early career scientist, Max Fontus wondered how successful researchers repeatedly make discoveries worth publishing. Collaborating with a Princeton engineering professor this summer, he realized that working with scientists from other fields of research results in a cross-pollination of ideas that lays the foundation for great progress in science.

"It also opened my mind about the continuity of research," said Fontus, an assistant professor of theoretical physical chemistry at Prairie View A&M University in Texas. "I always thought of a discovery as a major advance. In truth, it takes small but necessary steps to keep moving forward. You jump from lily pad to lily pad to get across the pond, and to do that you need fresh ideas."

Fontus and two other visiting junior faculty were paired up with Princeton engineering faculty this summer as part of the Leadership Development Institute, a National Science Foundation (NSF)-supported project intended to bolster research capacity and strengthen science, technology, engineering and mathematics research and education at historically black colleges and universities.

During the 10-week research appointment, organized by the Princeton Center for Complex Materials, the Princeton Institute for the Science and Technology of Materials and the independent Quality Education for Minorities Network, a nonprofit organization based in Washington, D.C., the visiting scientists collaborated with the Princeton faculty on a project that melded their research interests.

"The goal of the program is to help develop the next generation of young leaders at historically black colleges and universities," said Dan Steinberg, the director of education outreach for the Princeton materials science center. "They are young researchers, but they have advanced research interests, so we helped them find the right match with our faculty."

Steinberg said the program helps the visiting faculty network with Princeton researchers, laying the groundwork for future collaborations that could lead to scientific advances and career opportunities. It also gives them access to the cutting-edge research facilities of the Princeton materials science center, one of 29 NSF Materials Research Science and Engineering Centers around the country.

Michelle Waddell, a chemistry professor at Hampton University, worked with Robert Prud'homme, a Princeton professor of chemical and biological engineering. Their project focused on developing ways to encapsulate medicines in nanoparticles -- molecule-sized containers (less than 100 nanometers in diameter) that target cancer cells. Waddell experimented with ways to chemically bond the drugs to the nanoparticles, which act like tiny Trojan horses sneaking the drugs past the outer defenses of cancerous cells so the drugs can attack the cells from the inside.

It was the first time Waddell had worked with nanoparticles, which required using new research equipment and techniques. "In addition to Michelle's learning this new research and how chemistry can contribute to it, she's teaching a course at Hampton on drug delivery, so a lot of the ideas she's getting here will translate into her teaching next year," Prud'homme said.

During her research as part of the Leadership Development Institute, Kinesha Harris, an assistant professor of biochemistry at Southern University at Baton Rouge, found that leaves from tropical almond plants native to Nigeria possess antimicrobial properties that might be effective against harmful bacteria. (Photo by Frank Wojciechowski)

Kinesha Harris, an assistant professor of biochemistry at Southern University at Baton Rouge, worked with Winston Soboyejo, a Princeton professor of mechanical and aerospace engineering. Together, the pair developed a project to search for medicinal compounds in tropical almond and pigeon peas, two common agricultural crops grown in Soboyejo's native Nigeria.

"In Africa and other countries, people use the leaves, bark and fruit of the tropical almond tree to treat respiratory conditions, body aches and skin wounds," Harris said. "They grind it up and make a tea out of it. People take it for headaches and stomachaches and use it as a stimulant, like coffee. Similarly, the leaves of pigeon pea plants are thought to have antibiotic and anticancer properties."

Harris made extracts from both plants and tested to see if they might make effective medicines. She applied the extracts to harmful bacteria to see if they have antimicrobial properties that might be used to develop medicines. The tropical almond extract showed signs of being toxic to the offending bacteria cells.

"The project will definitely go on," she said. "I expect my collaboration with Professor Soboyejo will continue, and we will work together on other projects." 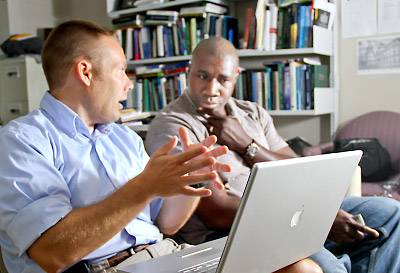 Mikko Haataja, a Princeton assistant professor of mechanical and aerospace engineering (left), talks shop with Max Fontus, an assistant professor of theoretical physical chemistry at Prairie View A&M University in Texas. Fontus spent 10 weeks at Princeton this summer working with Haataja to develop a way to stabilize bulk metallic glasses, which are metal alloys that are stronger and lighter than traditional metal alloys. (Photo by Chris Emery)

For his summer research, Fontus teamed up with Mikko Haataja, an assistant professor of mechanical and aerospace engineering. The two researchers were matched because they share an interest in developing computer models that can be used to design and test new materials for use in a range of fields, from medicine to building construction.

Fontus typically conducts research that has potential medical applications, but his work with Haataja focused on bulk metallic glass (BMG), which are metal alloys that are referred to as "glasses" because they lack the rigid molecular order found in most metals.

Research has shown that BMGs are far lighter and stronger than regular metal alloys. "They might be a replacement for traditional metals that have been used for centuries," Haataja said. "But when they fail, they fail rapidly, like a window that shatters completely when it cracks."

Haataja and Fontus explored whether salting the BMG mixture with small disc-shaped particles of metal might stabilize the glass and prevent the catastrophic failures. Their computer simulations suggested that changing the shape of the additional particles from simple solid discs to a snowflake-like pattern improved the stability of the BMG by as much as 30 percent.

"I was expecting this huge thing, but it was really just the simple step -- from a solid disc to a snowflake," Fontus said. "It was simple, but beautiful."

In addition to their own collaboration, the professors hope to strengthen ties between other faculty and students at their respective institutions. Haataja plans to give a lecture on materials science at Prairie View this fall, and the two researchers are developing a program that would bring undergraduate students from Prairie View to participate in research at Princeton next summer.

"Most breakthroughs in science and engineering nowadays come through interdisciplinary research that includes researchers at multiple institutions," Haataja said. "This opens doors for all of us."