In just three minutes, John Groves explained how his innovation could save time.

Groves, a chemistry professor at Princeton University, told a panel of business leaders gathered on campus April 8 that a new technology he helped develop could catch dangerous side effects of drugs in the earliest stages of development, long before they would be tested in humans. Compared to existing technology, he assured the panel, "we can do it faster and cheaper."

Groves was among 16 presenters at Princeton's fifth annual Innovation Forum, which showcased Princeton research that has the potential to be commercialized. The scientists and engineers extolled their innovations to an audience of investors, members of the University community and a panel of judges that, after hearing the quick presentations, allotted more than $40,000 to the top three entries.

"World-class research is performed in the labs here at Princeton, and we will get a glimpse of some of this research tonight," Pablo Debenedetti, vice dean of the School of Engineering and Applied Science, told the audience. "There are many ways that this research can be deployed to benefit society and improve our world. One way is to encourage faculty to share their research with interested observers such as you and create opportunities for scientists and engineers to talk with investors and community members about the real-world applications of their work."

This year's forum was sponsored by the University's Keller Center for Innovation in Engineering Education, the Jumpstart New Jersey Angel Network and Drinker Biddle & Reath LLP in conjunction with Princeton's Office of Technology Licensing. Jumpstart Chairman Mario Casabona said his organization participates in the forum as a way of supporting innovation and entrepreneurship. “Programs like this continue to foster the culture of innovation that we have worked so hard to achieve and maintain here in New Jersey,” he said.

The presentations, in fields including health, optics, computing and transportation, were followed by a poster session and reception in the Friend Center Convocation Room. 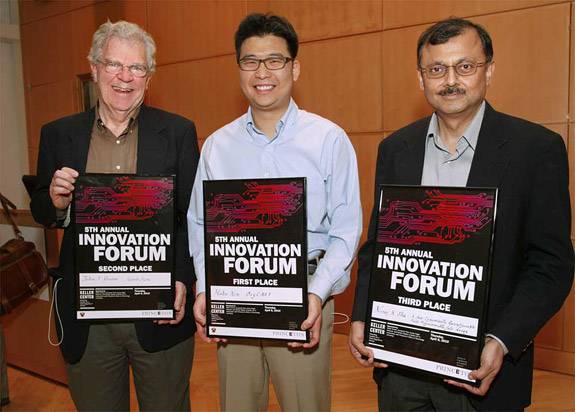 The winning entry, presented by Hahn Kim, a postdoctoral researcher in chemistry, also involved speeding the process of drug development. Called OrgCast, it is a method for quickly generating large numbers of molecules and testing whether they are reactive in the human body. Using the technique, Kim and his collaborators have identified about 4 million molecules that hold potential as new drugs.

Second place went to HepatoChem, the technology developed by Groves and Marc Bazin, a visiting associate professional specialist in chemistry. The technique mimics the way the liver works, enabling the automated and rapid biochemical analysis of drug compounds to speed the scientific discovery of new drugs and drug metabolites. 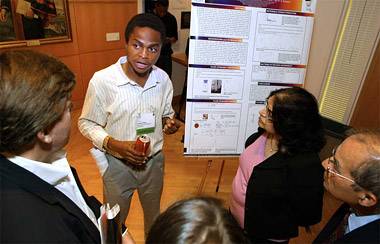 Two of the entries addressed health and infrastructure problems in remote regions of Africa. Ismaiel Yakub, a graduate student in mechanical and aerospace engineering, presented a system for using inexpensive clay filters to remove parasites from drinking water, and Tiffany Tong, an electrical engineering graduate student, proposed a method for manufacturing and distributing solar-powered lanterns to areas with no access to the electrical grid.

"People don't realize how big of an issue this is," Tong said during the poster session. "Many people rely on traditional, nonrenewable resources that are expensive and produce a lot of smoke. As a result, children can't study at night, and many people suffer respiratory problems. We propose using cheap LED lights and housing them in bodies made of wood or other natural materials instead of plastic. There's a huge potential market."

Videos of the Innovation Forum presentations will be available beginning April 18 on the engineering school website.