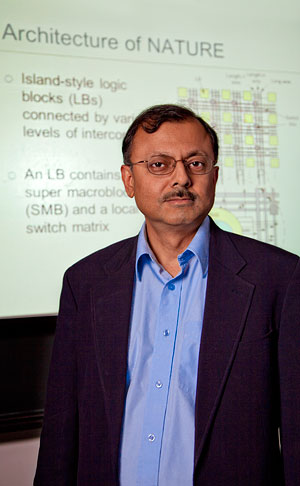 The NATURE technologies developed by electrical engineer Niraj Jha and his colleagues use an innovative "logic folding" process to improve the design and efficiency of programmable computer chips. (Photo by Brian Wilson)

What it does: Using an innovative concept called logic folding, the NATURE technologies -- the name is derived from CMOS/NAnoTechnology reconfigURablE architecture -- improve the design and efficiency of programmable computer chips called field-programmable gate arrays (FPGAs). FPGAs provide a flexible platform that users can configure to implement the desired applications, such as digital signal processing, image processing and multimedia. They compete with application-specific integrated circuits (ASICs) that are designed for a specific embedded system, such as a cell phone, rather than for general-purpose use. Compared to ASICs, it takes much less time to implement applications on FPGAs. But the fact that FPGAs have a larger chip area and higher power consumption than ASICs means they currently corner less than 2 percent of the $250 billion semiconductor market, while ASICs comprise 10 percent of the industry.

The technologies invented by Jha and his colleagues include the hardware itself as well as a software tool that enables the mapping of any circuit to the chip. The logic folding methodology conceptually folds the circuit 10 to 50 times, dramatically reducing both the chip's size (and therefore, its cost) as well as its power needs. This dynamic reconfiguration takes only hundreds of picoseconds -- orders of magnitude faster than the blink of an eye.

"Closing the gap between ASICs and FPGAs could drastically increase FPGA market share, which has the potential for use in everything from toys and cell phones to printers, automobiles and airplanes," Jha said. "A key advantage is rapid time-to-market because NATURE can enable the development of a complete system within a few months, as opposed to 1.5 years typically taken for ASICs-based devices."

Collaborators: Electrical engineering graduate student Ting-Jung Lin, and Wei Zhang and Li Shang, who earned their Ph.Ds from Princeton in 2009 and 2004, respectively.

Commercialization status: Several patents are pending on the technologies, which are co-owned with Queen's University in Ontario, Canada.