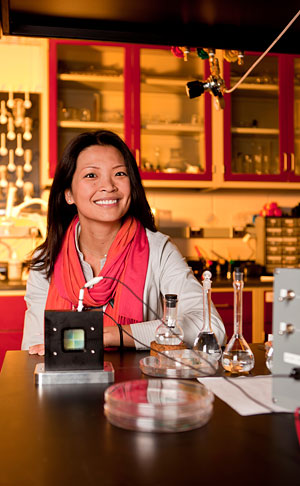 A new method for creating electronic switches from carbon-based plastics pioneered in the laboratory of chemical and biological engineer Lynn Loo could enable the development of low-cost solar cells and electronics. (Photo by Brian Wilson)

What it does: The idea of using plastics in lieu of metals in certain electronic devices is an attractive proposition -- plastics are lightweight, easily processed, flexible, and often less expensive than their metallic counterparts -- but efforts to do so have been hampered by difficulties in processing and molding plastics that conduct electricity.

A new method developed in Loo's laboratory enables the creation of contacts for transistors, or electronic switches, from polyaniline -- a carbon-based conductive plastic. The low-cost technique uses a process similar to the one used to print newspapers to produce the transistors, which creates potential for scaling up the technique for mass production.

The conductivity and transparency of polyaniline make it a good candidate for replacing indium tin oxide (ITO), an expensive material currently used in solar cells and electronic displays. The demand for indium, a rare mined metal, has increased with the proliferation of electronic devices such as plasma televisions and smartphones, and its ongoing use at this growing rate is neither sustainable nor economically feasible, according to Loo. Commercially available solar panels created using a technique similar to the one developed in Loo's lab could significantly lower the cost of solar cells, and therefore overcome some of the barriers to their more widespread use. Other potential applications include the creation of large-area displays, such as solar-powered display walls in bus stops, and low-cost disposable sensors for biomedical applications.

Collaborators: Graduate student Jacob Tarver; Kwangseok Lee, who worked with Loo at the University of Texas-Austin and is now at Intel Corp.; Joung Eun Yoo, who earned her Ph.D. from Princeton in 2009; Kimberly Baldwin, currently an undergraduate at Lehigh University; former Princeton postdoctoral research associate Enrique Gomez, now at Pennsylvania State University; and Andreas Garcia and Quyen Nguyen of the University of California-Santa Barbara.