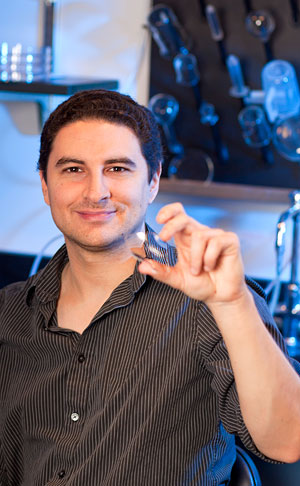 The bendable "piezo-rubber chips" developed by mechanical and aerospace engineer Michael McAlpine and his collaborators may one day harness body movements to create electrical energy for powering pacemakers and other implantable devices. (Photo by Brian Wilson)

What it does: To power hearts that need help, Michael McAlpine is looking no further than the lungs.
Piezoelectric materials, which convert mechanical energy into electrical energy and vice versa, have been around for a long time, but their rigid nature historically has made them unsuitable for use in implantable systems that might harness the movements of the lungs to power pacemakers or other biomedical devices.

McAlpine and his colleagues have devised a method to create nanowires out of a piezoelectric material, lead zirconate titanate (PZT), and mount them on silicone -- a flexible material already FDA-approved for use in bioimplants. When PZT is drawn into very thin wires, it becomes flexible, enabling the creation of bendable "piezo-rubber chips" that could harness body movements to create electrical energy.

"Our ultimate goal is to create power-generating bioimplantable devices that eliminate the need to replace the batteries in pacemakers and other devices," McAlpine said. Since the piezo-rubber chips also work in reverse -- turning electrical energy into mechanical energy -- they may also have potential applications in microsurgical devices.

Commercialization status: A patent is pending.