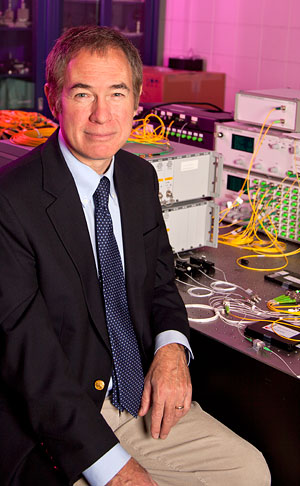 "The wireless equivalent of being able to detect a whisper in the roar of a freight train," the optical radiofrequency interference cancellation system invented by electrical engineer Paul Prucnal and his collaborators enables receivers to detect a weak signal in the presence of noise coming from a nearby source. (Photo by Brian Wilson)

What it does: By enabling receivers to detect a weak signal in the presence of noise coming from a nearby source, Prucnal's system addresses the "co-site interference problem" -- a scourge of wireless communications technology that occurs when signals from sources close together interfere with one another. This issue, also known as spectral fratricide or unintentional jamming, can wreak havoc on cell phone connections and place the lives of soldiers traveling through enemy territory in grave danger when it interrupts their ability to share vital information.

The new method developed in Prucnal's lab uses an optical approach to solve the problem, converting the electronic signals into optical, or light-based, ones. These signals are then carefully manipulated to preserve the integrity of the desired signal while subtracting the noise. Portable and compact, the system is designed to enable use on moving vehicles, such as those involved in security and military applications.

"It's the wireless equivalent of being able to detect a whisper in the roar of a freight train," Prucnal explained.

Commercialization status: A patent is pending and the technology has been licensed to a start-up co-founded by Prucnal and McCandless, an entrepreneur.