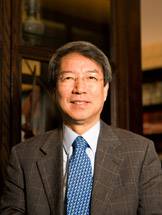 Un-Chan Chung, a leading Korean economist and former president of Seoul National University, will spend this semester at Princeton to lend his expertise to the University's expanding focus on Korean studies.

Chung will be a visiting fellow at the Princeton Institute for International and Regional Studies (PIIRS). A professor of economics at Seoul National University for the last 30 years, he also has held senior positions in government commissions and private research institutions. He received his Ph.D. in economics from Princeton in 1978.

During his fellowship at Princeton, Chung will present a lecture on Korean economic growth on Monday, Sept. 22, and will serve as a commentator at a conference on "Vietnam and East Asia in a Globalized Context" planned for Thursday and Friday, Oct. 16-17.

"We invited Dr. Chung to join us because we recognized how valuable his presence would be in stimulating a deeper conversation on campus about the importance of Korean society: its literature, culture, political history and economic influence," said Katherine Newman, the director of PIIRS and the Malcolm Stevenson Forbes Class of 1941 Professor of Sociology and Public Affairs.

Chung served from 2002 to 2006 as president of Seoul National University, which is considered the country's leading higher education institution.

"I have always had a great longing to visit my alma mater to return what I received from my mentors and the fine education here," Chung said. "I am very eager to meet with my former professors in the Department of Economics and to discuss recent developments in economics, and I look forward to meeting as many professors, students and people in the Princeton community as possible."

His fellowship comes as Princeton has enhanced its attention to Korean studies by hiring two faculty members in the field, adding to the expertise of Gilbert Rozman, the Musgrave Professor of Sociology and a specialist in Korea as well as China and Japan. Joy Kim, an assistant professor of East Asian studies who joined the faculty in 2006, examines the cultural and social history of early modern Korea. Steven Chung, also an assistant professor of East Asian studies, joined the faculty last year and focuses on modern Korean cultural studies. The University's library collection in the field also has been strengthened through support from the Korea Foundation.

"Dr. Chung will be an invaluable resource on campus," said Sheldon Garon, the Dodge Professor of History and East Asian Studies. "As president of Seoul National University and an influential adviser to the government, Dr. Chung has been personally involved in many of the policies that have transformed South Korea's economy and society since the Asian financial crisis of 1997."

Chung's Sept. 22 lecture, titled "Uncertainty and Sustainable Economic Growth in Korea," will be delivered at 4:30 p.m. in 219 Burr Hall. It is the first in a series of three lectures to be given at the University this fall on the economic policies and political situations of Korea, hosted by PIIRS and the Program in East Asian Studies.

"This year marks the 60th anniversary of the inauguration of the government of the Republic of Korea, when Korea was reborn as a republic that pursues the modern values of democracy and capitalism," Chung said. "In East Asian countries, because 60 years complete one astrological cycle, the 60th birthday is deemed a very special occasion for celebration. It’s a befitting occasion to retrace the footsteps that South Korea has taken and to ponder on what lies ahead."

While at Princeton, Chung also will devote time to his ongoing research in macroeconomics, money and financial markets, specifically studying the nature and origin of the subprime mortgage markets, the American financial market crisis and the history of financial crisis in a global context.