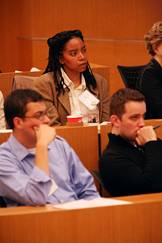 Leslie Hinkson (center) is one of four graduate students who already have taken advantage of the international fellowships offered through the Global Network on Inequality. She studied last year at the London School of Economics’ Centre for Analysis of Social Exclusion.

Below left: Hinkson joined 45 scholars from the Global Network’s member institutions and 50 faculty members and graduate students from U.S. institutions in April at a conference on Princeton’s campus titled “New Directions in Inequality and Stratification.”

From the June 5, 2006, Princeton Weekly Bulletin

Junior year abroad is almost a rite of passage for undergraduates these days. Graduate students in the social sciences at Princeton now have a similar opportunity to expand their educational horizons.

The new Global Network on Inequality provides fellowships for graduate students in sociology and politics to conduct research abroad in collaboration with scholars at 15 institutions in Western Europe, Japan, India and South Africa. The program allows students specializing in the study of political participation, immigration or educational inequality, for example, to gather and analyze data examining parallel problems in other countries for a period of two months. Funded by the Princeton Institute for International and Regional Studies (PIIRS) and the Woodrow Wilson School of Public and International Affairs, the program is enabling graduate students to pursue topics as diverse as the social determinants of educational inequality in South Africa and the role of women in the labor force in Germany.

“This experiment in international research places Princeton at the forefront of a new kind of graduate training in the social sciences,” said Katherine Newman, the Malcolm Stevenson Forbes, Class of 1941, Professor of Sociology and Public Affairs, who founded the program. “In the end, our students are going to be vastly advantaged by having this experience. It will change the shape of their research.”

Newman noted that European doctoral students routinely complete their training in multiple countries and have the benefit of working with faculty from different intellectual traditions. “It will be a boon for Princeton students to be able to do the same,” she said. “This is part of what globalization means in higher education, and we think it’s the wave of the future.”

She said the program also provides a counterpart to opportunities for students in the natural sciences, who often work in laboratories in other parts of the world. “In the social sciences, those opportunities tend to be restricted to area specialists who plan to devote their careers to the study of another society,” she said. “Princeton’s program is special because it extends the opportunity for foreign research experience both to comparativists and to those who plan to specialize in the study of American society.”

Organizers chose inequality as the focus for the network because of the recent spread of disparities in income, educational attainment and health in advanced industrial societies as well as in the developing world.

“The study of inequality may be one of the least globalized, and this program is a great way to introduce students to other people and perspectives and to show them that there is a great return on the time and money invested in traveling outside of the United States,” said Miguel Centeno, director of PIIRS. “I wish we had money to [enable] every grad student in the social sciences do something similar.”

To win a fellowship from the Global Network on Inequality, graduate students must first investigate data sets or fieldwork opportunities that might be available in one of the 15 network partners (including prestigious institutions such as Sciences Po in Paris, the London School of Economics and the European University Institute in Florence). They submit proposals for short-term research projects they can conduct under the supervision of a professor who is on the faculty at one of the partner institutes. Their plans are reviewed by an advisory committee at Princeton, followed by another one at the participating institution. If the proposal is approved, the student receives a stipend that covers travel and living expenses for two months of research abroad.

So far, four Princeton sociology graduate students have completed fellowships and another eight — six in sociology and two in politics — will study abroad between now and April 2007. The goal, Newman said, is to send 10 to 12 fellows abroad for residential fellowships each year.

“The network permits our students to go and learn in an apprentice-like mode from colleagues in these different countries, who take them under their wing and provide them with a sustained experience for a couple of months,” Newman said.

One of the recent winners, Nick Ehrmann, a third-year graduate student in sociology and demography who will travel next spring to South Africa, said he was thrilled at the chance to gain new perspectives by studying abroad. “In addition to anxiety, general lack of sleep and hours spent in solitary confinement, the intense focus required for studies at the doctoral level can have more hidden consequences. Our personal experiences and perspectives are most often limited to one campus in one state in one country. The Global Network on Inequality is an antidote to this kind of provincialism.”

Ehrmann, a former Teach for America elementary school teacher, said his work examines the social determinants of educational inequality. “My current research focuses on educational aspirations for higher education among inner city youth in Washington, D.C.,” he said. “In Cape Town, I plan to explore what predicts enrollment into higher education, using a comparative perspective to better understand how family structure, peer relationships, poverty and neighborhood structure affect how and whether students plan to attend college.”

Christine Percheski, who is currently in residence at the University of Bremen in Germany, also expressed enthusiasm for the program: “American graduate students and researchers have a lot to gain by collaborating with international colleagues, studying social inequality in new contexts and considering new perspectives on research.”

Percheski’s work focuses on how changes in women’s employment and family structures are related to changes in income inequality in the United States over the last 40 years, and Newman said she was convinced Percheski’s work abroad would enhance her domestic research immeasurably. “Christine is interested in the relation between women’s work and family obligations. She went to Germany because they have one of the best data archives on the life course in the world and a distinguished faculty focused on this methodology.”

“She will return to Princeton having completed a research project using German data that would have been impossible to access here, and having forged important ties with major figures in the field,” Newman continued. “While Christine expects to be a specialist in the study of life course dynamics in the U.S., she will have a comparative perspective that will be invaluable.”

The fellowships are expected to have a lasting impact on each of the participating students. “I think we will see that their careers will change because of this experience and that they’ll end up going back to pursue these topics once they leave Princeton,” Newman said.

Leslie Hinkson, who studied last year at the London School of Economics’ Centre for Analysis of Social Exclusion (CASE), is already talking about returning to the United Kingdom once she’s completed her dissertation on racial and ethnic gaps in standardized U.S. test scores and how different academic settings, particularly schools run by the military abroad, can reduce or eliminate these differences.

“My time in London was spent in part thinking of future avenues of research beyond my dissertation. While at CASE, I found that much of the theory on race and race relations that was being utilized in sociology was either imported from the United States or from the field of psychology within the United Kingdom. So there seems to be great opportunity for contributing to the creation of a race theory that is rooted in the U.K. experience.”

Recognizing that graduate students aren’t the only ones who can benefit from international exchanges, the network also works to bring renowned scholars together to share information and insights. The Global Network recently sponsored a major international conference titled “New Directions in Inequality and Stratification” as part of the 75th anniversary of the Woodrow Wilson School. Nolan McCarty, professor of politics and an associate dean of the Woodrow Wilson School, spoke at the event, which he described as “a rare opportunity to talk across both geographic but also disciplinary borders about important problems.”

“The broader issues covered by the network — inequality, stratification, poverty, migration — are no longer purely domestic problems,” McCarty added. “They are problems faced collectively by all nations and increasingly have an international dimension. So an academic exchange among scholars working globally is especially important.”

Some 45 scholars from the member institutions of the Global Network visited Princeton for the April 6-8 conference to present their work and to hear papers from Princeton faculty in economics, politics and sociology. More than 50 faculty members and graduate students from U.S. universities, including Yale, Cornell, NYU, Columbia, the University of Wisconsin, the City University of New York and the University of Pennsylvania, contributed to the event as well.

Among those in attendance was Professor Yoshimichi Sato, director of the Tohoku University Center for the Study of Inequality and Social Stratification in Sendia, Japan, one of the network’s participating institutions. He said the conference provided him with some invaluable connections. “The recent conference was a wonderful opportunity to meet specialists in my field. In Japan, information on social stratification in Europe is not very accessible, so meeting people from Europe and other countries was very stimulating.”

Karl Ulrich Mayer, chair of the sociology department at Yale and a discussant at the conference, also voiced praise for the network’s outreach efforts. “I think it is an important and useful enterprise because it connects research centers and especially graduate students and researchers from many countries, opening a perspective on between-country inequalities in addition to within-country inequalities. By comparing the mechanisms, explaining inequalities becomes more apparent.”

In the future, the Global Network is likely to expand its international scope as well as its disciplinary reach to facilitate the research of graduate students in psychology and economics. The flow of faculty from the institutes to Princeton is expected to increase as well. “This is a unique opportunity to spread the word about the outstanding research done at Princeton and to learn firsthand about the equally impressive work done by our colleagues in Africa, Asia, Europe and Latin America,” Newman said.