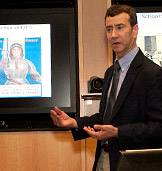 Princeton historian Sheldon Garon's latest book, "Beyond Our Means: Why America Spends While the World Saves," explores why some nations promote saving, while others, specifically the United States, encourage spending. Garon is  a scholar of Japan with broader interests in the transnational history of ideas and institutions. 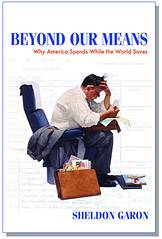 In "Beyond Our Means," Garon expanded his initial study of the Japanese state's efforts to promote savings in the late 19th century into a global history of how several nations have encouraged saving — or spending.

Scholarly focus: Modern and contemporary Japan, with broader interests in the transnational history of ideas and institutions. Garon's most recent book is "Beyond Our Means: Why America Spends While the World Saves," published this fall by Princeton University Press.

Why did you write "Beyond Our Means," which asks why some nations promote saving, while others, specifically the United States, want its citizens to spend?

The book evolved. In its final form, I spotlight the developments, historical and recent, that shaped America's unsustainable culture of debt. In the wake of the 2008 housing and financial meltdown, it has become painfully clear that millions of American households lack the savings to protect themselves against home foreclosures, job losses, medical emergencies and impoverished retirements.

Initially, I planned to write a history exclusively about the Japanese state's efforts to promote saving since the late 19th century. But the more I researched, the more I realized that Japan adopted many of its savings-promotion mechanisms, such as the postal savings system and school savings programs, from contemporary European nations. To this day, the major economies of continental Europe — notably Germany and France — boast high household saving rates. I also discovered that rising Asian economies — China included — modeled their savings-promotion programs after Japan's. My book evolved into a truly global history of how many nations around the world transformed their people into savers, while institutions and policies in the United States historically did less to encourage "small saving" and increasingly promoted consumption and borrowing.

In general, the high-saving economies of Europe have higher levels of income equality, whereas the United States scores much lower in both inequality and saving rates. This perplexes many economists who believe that generous welfare states and policies of redistribution tend to discourage personal saving. Instead what may be happening is that social benefits keep Western Europeans from falling into destitution and thereby contribute to decent saving rates overall. In the United States, by contrast, the lack of sturdy safety nets results today in growing numbers of struggling households that simply cannot save.

I'd add that Japan boasted some of the world's highest household saving rates in the 1970s, but its rates have dropped in recent years to well below those of several European nations. 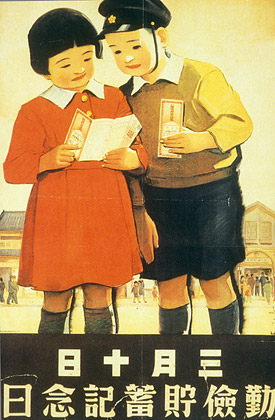 This 1936 savings campaign poster from Japan with the words "Diligence, Thrift and Savings Day" depicts schoolchildren putting aside money. (Poster by Yūsei Kenkyūjo, Modanizumu no jidai, 13. Courtesy of the Communications Museum, Japan.)

The United States, Western Europe and Japan all have embraced consumerism. Why is there such a difference in saving and spending?

To be sure, Japanese and Western European economies experienced "consumer revolutions" in the 1950s, and thereafter their peoples enjoyed rising levels of consumption. Yet we should not think that the other advanced economies have embraced consumerism to the degree of Americans. Levels of consumption remain far below the United States in countries like Japan, Germany and Sweden.

Moreover, credit for consumption and housing has been much less available in the high-saving countries. Most Japanese pay their credit card bills in full, and few people in the major continental European countries own a genuine credit card that allows one to borrow the unpaid balance. Home equity loans are rare in Japan and Germany, and down payments on home mortgages are typically higher than in the United States. As a rule, less credit generally results in higher saving.

How did the notion of "individual savings" evolve?

Although human beings have always put aside food or property for times of want, only in the last 200 years have ordinary people saved money in banks. Beginning in Europe around 1800, reformers and political authorities encouraged working- and middle-class households to save small sums in newly created savings banks. They believed that working people with savings would be less likely to turn to crime, revolution and the dole. In addition to savings banks, reformers and states gradually established nationwide postal savings banks, school savings programs and war savings campaigns in the two world wars. 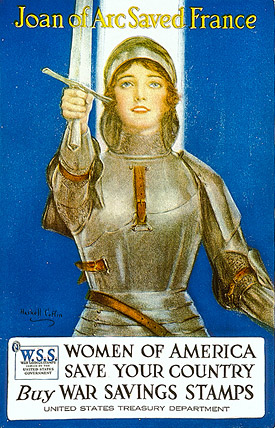 This 1918 poster from the United States appeals to the legend of the heroine Joan of Arc in an effort to encourage women to save. (Poster by Haskell Coffin. Reproduced by permission of the Robert D. Farber University Archives and Special Collections Department, Brandeis University.)

How important are government policies and institutions in encouraging savings?

Very important. My book shows that people tend to save more when they are offered accessible, convenient and safe savings institutions. In the United States today, some 25 percent of lower-income households are "unbanked" — often because our banks charge them hefty fees and require high minimum balances. It is very difficult to save regularly under those circumstances.

What's the relationship between policy initiatives and cultural attitudes?

While many love to talk about Japanese, Korean or German culture as being innately thrifty, I show how the various cultures of saving have been shaped and reshaped by states and institutions. "Moral suasion" campaigns, such as Americans and citizens of other countries experienced in the two world wars, have also been influential in inculcating enduring habits of saving. Indeed, East Asian and European nations went beyond the United States in developing nationwide savings campaigns in peacetime as well — particularly among schoolchildren and housewives.

The current economic situation in the United States and other countries puts into sharp relief the perils of "living beyond our means." What would need to change for these dangers to be less severe in the future? What could be done now? 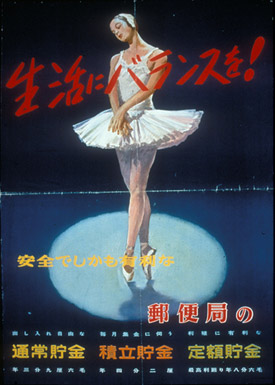 In 1955, the Japanese government released this poster, "Keep a Balance in Life," noted in characters at the top, asking its populace to balance consumer desires against the needs of accumulating sufficient savings. The rest of the text states: "Savings accounts at the post office: Not only safe. They pay good interest." (Image courtesy of the Communications Museum, Japan, XD-C52)

My book concludes with several policy recommendations based on what has worked in other countries and in our past. These include 1) improving small savers' access to banks, 2) encouraging banks to offer small savers' accounts, 3) possibly reviving postal savings both to improve access and save the Postal Service, 4) promoting youth saving in schools and banks, 5) revising tax laws to encourage low- and middle-income individuals to build assets, 6) better regulating predatory lending, and 7) promoting universal access to savings accounts in terms of democracy and "financial inclusion."

What from this work do you bring to your classes at Princeton? What do you hope students will learn?

I often lecture to my students about the Japanese state's historical efforts to promote saving, and I teach them how to read messages contained in the ubiquitous savings posters of 20th-century Japan. I am considering offering a more global course on the history of saving, consumption and credit — perhaps as a freshman seminar. 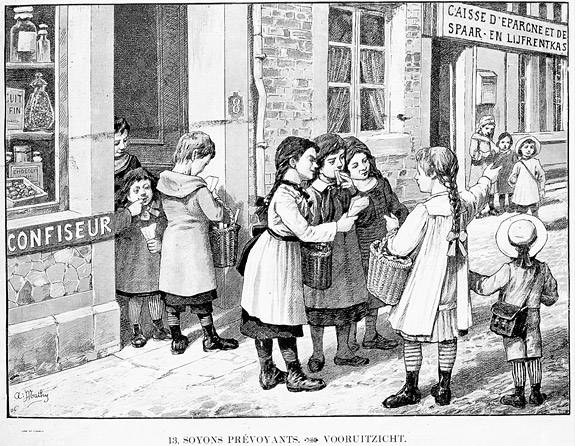 This 1906 illustration from Belgium, "Let's Be Prudent," shows a schoolgirl urging other children to stop spending money at the candy store and to instead make a deposit at the nearby national savings bank (CGER). (Illustration by André Mathy. Archives of the CGER, courtesy of BNP Paribus Fortis collection, Brussels.) 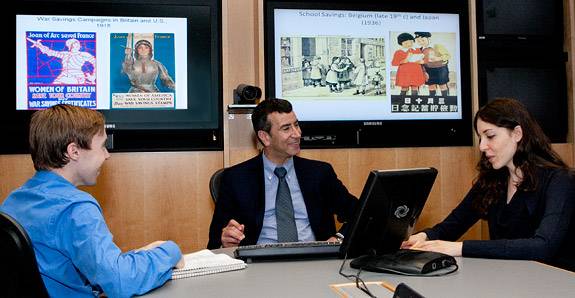 Garon (center) shares his work with his students, such as his archival research on historic posters from savings campaigns from different nations. Above, he meets with senior Raphael Murillo (left), who took a modern Japanese history course with Garon; and Reut Harari, a graduate student focusing on Japanese history of science. (Photo by Denise Applewhite)