When the economy hits the skids, government stimulus checks to the poor sometimes follow.

Stimulus programs — such as those in 2001, 2008 and 2009 — are designed to boost the economy quickly by getting cash into the hands of people likely to turn around and spend it.

But sending cash to just the very poor may not be the right approach, according to researchers from Princeton University and New York University who analyzed information on the finances of U.S. households from 1989 to 2010.

"What we found is that households that have the lowest liquid wealth — where liquid wealth is defined as basically anything other than housing and retirement accounts — tend to spend a large part of their stimulus checks, but many of those households aren't the poorest in terms of income or net worth," said Greg Kaplan, an assistant professor of economics at Princeton. "That's the group we call the wealthy hand-to-mouth."

Thirty to 40 percent of U.S. households live hand-to-mouth, consuming all of their disposable income. Two-thirds of those households fall into a category described as the "wealthy hand-to-mouth," according to the work by Kaplan, Giovanni Violante, the William R. Berkley Term Professor of Economics at New York University, and Justin Weidner, a graduate student in economics at Princeton.

The median income of "wealthy hand-to-mouth" households is middle class — roughly $40,000 a year — and they have a median illiquid wealth of about $50,000. But because they have little cash on hand, they react to swings in income more like the poor than like the wealthy, Kaplan said. The poor hand-to-mouth, in contrast, have little cash on hand and little illiquid wealth. 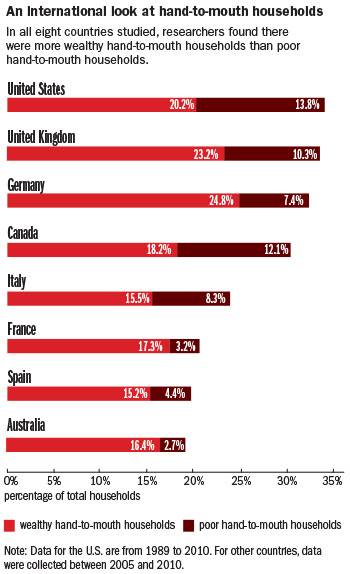 "The first is in thinking about the optimal way to target stimulus payments in order to get the biggest bang for the buck in terms of spending," he said. "The conventional wisdom has been that you want to give them [stimulus payments] to the poorest of the poor. Our work suggests that to maximize the amount spent you may want to pay out to people at middle-class levels of income as well as the lowest levels."

Another important implication, Kaplan said, is that while the wealthy hand-to-mouth are as likely to spend small stimulus checks as their poorer counterparts, the same is not true for larger stimulus checks. As the size of the payout increases, the wealthy hand-to-mouth are more likely to begin saving some of the money, reducing its effectiveness as a boost to the economy.

But why would a household with substantial illiquid wealth find itself short of cash? Kaplan said it can make sense for households to put money in illiquid assets — such as housing or retirement accounts — that offer high returns or substantial value even if it means the households then find themselves with little cash on hand. Also, the households may have recently purchased a house, using much of their liquid wealth as a down payment, Kaplan said. The researchers found that, on average, households held wealthy hand-to-mouth status for about 3.5 years.

Jonathan Parker, the International Programs Professor in Management and a professor of finance at the Massachusetts Institute of Technology Sloan School of Management, said the examination of the wealthy hand-to-mouth households highlights policy issues that go beyond economic-stimulus programs.

"Overall, this is a very nice example of social science advancing our understanding of how policies aimed at long-term issues like the adequacy of retirement saving have important implications for household liquidity and the ability of people to maintain their current standard of living in the face of adverse income changes or spending demands," Parker said.

The researchers also looked at household finances in Australia, Canada, France, Germany, Italy, the United Kingdom and Spain. The percentage of hand-to-mouth households varied widely from nation to nation, but in all nations most of those who live hand-to-mouth qualify as wealthy hand-to-mouth.

"It seems to be a common phenomenon that if you want to target people with a high propensity to consume, you should look at people who have money tied up in illiquid wealth," Kaplan said.

A paper based on the research by Kaplan, Violante and Weidner, "The Wealthy Hand-to-Mouth," was presented at a Brookings Institution conference last month. The paper is one of three to come out of a project by the researchers focused on understanding fiscal stimulus payments and household balance sheets. The research was supported by grant 1127632 from the National Science Foundation.