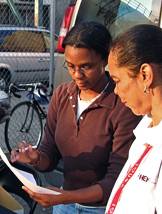 Professor Eldar Shafir, who conducts experimental studies of decision-making, has become increasingly interested in the relevance of that research for policy — especially regarding decisions made in the context of poverty. Members of Shafir's group spend a considerable amount of time off-campus gathering data. Graduate student Crystal Hall (left) recently conducted research at the St. Francis Inn, a homeless shelter in the Kensington neighborhood of Philadelphia.

Below left: Shafir and his fellow behavioral scientists ultimately are working to ensure that businesses and the government take into account the way people actually think and behave when making financial decisions.

Bottom left: Surveys gathered by research assistant Gina Mamikonyan (right) help the group determine attitudes of lower-income individuals toward financial issues and the circumstances under which they make decisions.

Adjusting his laptop, Eldar Shafir punches up a table of figures that represents the financial decisions of lower-income families in Trenton — a dozen miles down the road from his Princeton psychology lab, but a world apart in economic terms.

“Look at how much extra people will pay just to cash a check someplace friendly,” he says.

In the neighborhoods Shafir visits, though working people have the option of going to a bank to manage their money, they also are surrounded by cashing services that process checks for much higher fees. On his computer screen are numbers comparing how many people visit each kind of institution.

“It’s astonishing. Most of the people we have met are willing to spend a lot more to cash their checks at a service, because they feel that banks are intimidating and unwelcoming,” says Shafir, a professor of psychology and public affairs. “These are people who are not earning high incomes, but still would rather spend more at a business where they are welcomed by a clerk who remembers their mother’s name.”

Shafir, who conducts experimental studies of decision-making, has become increasingly interested in the relevance of that research for policy — especially regarding decisions made in the context of poverty. Some economic policies, he argues, fail to consider important psychological factors that come into play when people handle their finances.

So Shafir and his fellow behavioral scientists are trying to stage a quiet revolution that could change the field of economics from within. Their goal is simple: to ensure that businesses and the government take into account the way people actually think and behave when making financial decisions. For students of economics, who for decades have been trained to idealize consumers as completely rational and impervious to psychological factors, the team’s work may have profound implications.

“It is commonly believed that people are responsible for most of their own behavior, but research demonstrates the substantial influence of situational factors on the way we think and act,” says Shafir, who brings his findings into the classes he teaches in the Woodrow Wilson School of Public and International Affairs and the Department of Psychology. “As a behavioral scientist, you try to narrow the gap in teaching that exists between how people should behave ideally and what they actually do.” 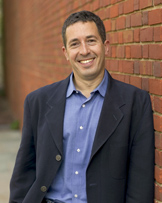 Shafir’s experimental studies focus on several facets of decision-making: What factors influence people’s decisions? How do we weight different factors in a decision? How do minor contextual nuances alter those decisions? Are we aware of these influences, and how to model them?

Standard thinking about poverty falls into one of two camps. Some regard the behaviors of the economically disadvantaged as calculated adaptations to prevailing circumstances. According to this camp, the poor are perfectly rational, just like everyone else. Others attribute the behaviors of the poor to a unique “culture of poverty,” rife with deviant values.

“We propose a third view,” Shafir says. “The behavioral patterns of the poor, we argue, just like those we observe among the comfortable and the educated, are neither perfectly calculating nor especially deviant. Rather, people in difficult circumstances such as poverty often exhibit the same basic quirks and weaknesses as do people from other walks of life, except that in poverty, with its narrow margins for error, the same behaviors can easily lead to substantially worse outcomes.

“What we find is that minor nuances can make a big difference,” he continues, “but such nuances are bound to appear trivial in the cost-benefit analyses that our policy-makers conduct. After all, how much ‘cost’ can plausibly be attributed to the fact that someone is not nice to you for a few minutes? The impact of that is a psychological barrier that behaves very differently from a standard cost. In a sense, we train our experts to ignore some of the things that might matter the most.”

No shortage of examples exists of how assumed and observed behaviors differ, and they are not limited to any single socioeconomic group. This, according to Shafir, is the more pervasive lesson of his research, which has covered subjects as varied as Medicare, financial loans, bank accounts, shoppers’ decisions, and medical decisions made by expert nurses and physicians.

“Social programs are often devised by well-meaning policy-makers who have simply not learned how to consider behavioral factors,” he says. “An example from recent history that involved many Americans was Medicare Part D’s application package.”

Offered initially in January of this year, Part D of the Medicare package was designed to provide many options for drug coverage to senior citizens. The program gained notoriety in part because of the sheer number of choices that potential participants had available.

“The program’s creators were quite proud of the fact that they offered so many options, but participation levels were disastrously low,” Shafir recalls. “Seniors felt overwhelmed and did nothing, even though it meant they were avoiding a program that could have saved them money. This effect is an example of what my colleagues and I have dubbed the ‘hassle factor.’”

The hassle factor, he says, often affects people presented with multiple alternatives that all seem to offer some advantages. For example, economists assume that if a shopper is given a choice between, say, two styles of shirts, the consumer essentially assigns a value to each shirt and chooses the one with the highest value. Increasing the number of styles to 12 should, in theory, make the customer happier because of the increased chance that one will satisfy his or her taste.

“Instead, it turns out that having more options actually deters people from buying anything, because too many options can be intimidating,” Shafir says. “People feel conflicted — ‘hassled’ — with too much to think about, and they defer making a decision until later. And often, ‘later’ never arrives.”

Assistance with sorting through the Medicare Part D options is available online, which has helped ease the signup process considerably. However, some seniors are not comfortable using the Internet, an issue also among impoverished populations.

“For lower-income individuals, much of what the rest of us take for granted can become an intimidating experience, or worse,” Shafir says, pulling up another slide on his laptop that shows a page taken from a food stamp application. “Can you imagine how you would react if you saw these words staring back at you?”

On the screen is a warning that anyone who does not follow food stamp rules may receive fines of up to $250,000 and a jail term of up to 20 years. This warning is among the closing lines of a 13-page application that rivals the complexity of an income tax form. Shafir says most of its intended audience has the equivalent of less than a ninth-grade reading level, and no lawyer to resort to in case something goes wrong.

“The psychological effect on the applicant is probably to stop them from applying in the first place, similar to what might happen if they saw some bank account applications,” he says. 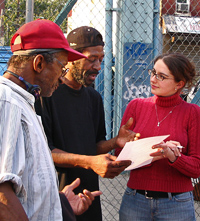 Exploring societal problems like these demands that a lot of work be done outside the confines of the lab. One of Shafir’s group members, Crystal Hall, takes a weekly trip to Trenton and impoverished neighborhoods in Philadelphia to gather data — and gain perspective.

“I’ve found that trust plays a much greater role in these neighborhoods than a traditional theorist might have been taught,” says Hall, a fourth-year doctoral student in psychology. “I talk to a lot of people at soup kitchens and train stations, and the difference in mindset is amazing.”

Hall and her research assistant often mingle with people in these areas to determine what matters most when choosing between two financial contracts with, for example, cable companies or auto mechanics.

“I’ll offer them two different choices on their cable services, one of which they’ve heard of, the other of which is new to them,” she says, “but I’ll also offer them different financial options that should, in theory, make one company more attractive than the other.”

These conversations have shown repeatedly that while upper-middle class people always choose the better financial option, the poor will choose the company they know.

“They would rather pay more for the familiarity and the trust,” she says. “The relationship is what is important to them.”

Shafir is trying to forge relationships of his own with policy-makers who might be able to implement some of what his group is learning, but he says that change is bound to be slow and piecemeal.

“I think general awareness and acceptance of the profound relevance of behavioral issues, both in academe and in the policy world, is higher than it was a decade ago,” he says. “I talk to people at places as diverse as the AARP and the Federal Reserve Bank, as well as nonprofit organizations. They are all clearly interested and explored a few of our ideas. Of course, implementation of many behavioral ideas is not trivial — minor contextual nuances can make a big difference. You can’t just take a solution that worked in one place and assume it will work in another.”

At the grassroots level, Shafir has implemented some of his ideas at Isles, an organization that helps foster family self-reliance in the Trenton area. Shafir, a member of the nonprofit’s board of trustees, has used his research to help Isles redesign its financial literacy program, which aids families in establishing savings accounts, cleaning up their credit and seeking mortgages.

In the national and international arenas, Shafir regularly presents his research to groups that influence economic policy. Last fall, for example, he participated in a roundtable discussion in Paris on behavioral economics sponsored by the Organization for Economic Co-operation and Development (OECD), a forum where the governments of 30 market democracies work together to address the economic, social and governance challenges of globalization.

“The OECD is interested in the implications of behavioral work for consumer protection,” Shafir says. “If people’s strengths/weaknesses are not as assumed, what implications does that have for how and where they ought to be protected?”

While these are small steps in taking into account the role of real behavior in economic policy-making, Shafir is hopeful that a sustained effort backed by a new generation of researchers will help turn the tide. The students Shafir is teaching have left his lab to work in psychology departments, business schools and, occasionally, private consulting firms. For Hall, being on the cusp of a revolution represents both a challenge and a natural progression.

“Research like this is harder than lab work,” she says. “But it amazes me that this hasn’t been done before.”

Better decision-making for the planet