Doug Hulette for the Department of Computer Science

Suppose you’re about to go snorkeling on the Great Barrier Reef or some other area of underwater beauty. You should be thinking about the wondrous marine life you’ll certainly see. But instead you’re fixated on the vanishingly small chance of coming eye to eye with a hungry shark. 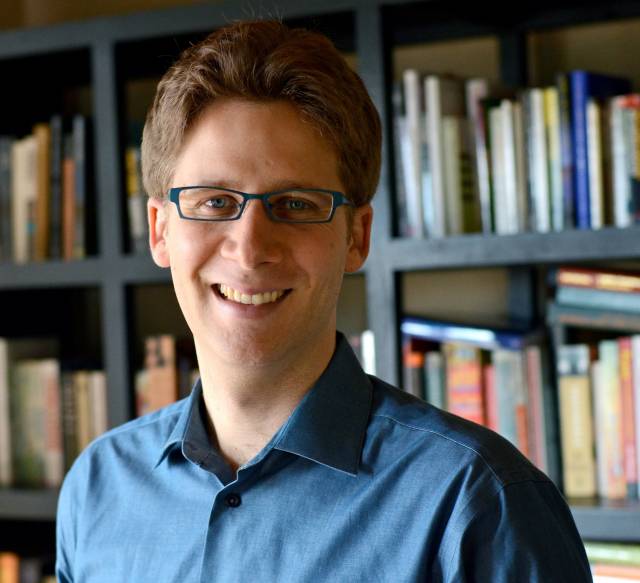 A case of irrational thinking? Not necessarily, according to Tom Griffiths, the Henry R. Luce Professor of Information Technology, Consciousness and Culture, who joined the Princeton faculty this summer. His is the first joint faculty appointment of the Department of Computer Science and the Department of Psychology.

Overpreparation for possible but unlikely events is a characteristic of much human decision-making, he said: “If you only have time to consider a few possible outcomes, it turns out to be perfectly rational to include extreme cases, even if they have low probability.”

Still, Griffiths might describe this situation as one “where human behavior could be improved upon,” and he’s using computers and complex algorithms to analyze how and why people often do things that seem to defy logic.

The snorkeling decision is the kind of thing Griffiths spends his time on. “A lot of our recent work explores the idea that it's not that people are irrational, but that our theory of rationality is not appropriate for real intelligent agents,” he said.

“Humans — and computers — have limited computational resources and limited time — something that is not taken into account in classical theories of rationality, which tend to stipulate that you should always take the very best action regardless of how hard it might be to compute what that action is,” Griffiths said. “Real agents have to trade off the computational cost of selecting an action with the benefits of taking that action. As a consequence, taking shortcuts and doing things that are fast but less accurate — two of the things that are often held up as illustrations of human irrationality — make perfect sense.”

Griffiths comes to Princeton from the University of California-Berkeley, where since 2006 he was a professor in the Department of Psychology and Cognitive Science. He also was director of the Computational Cognitive Science Lab and the Institute of Cognitive and Brain Sciences.

Tom Griffiths presents a TEDxSydney talk last June, sharing practical strategies for making better decisions — such as finding a home or choosing which restaurant to go to.

Jennifer Rexford, chair of the computer science department and the Gordon Y.S. Wu Professor of Engineering, described her new colleague as “a leader in moving cognitive science from the era of small-scale laboratory studies to a future of automated experiments with a large number of users. The result is no less than a transformation of experimental methods in cognitive science, enabling breakthrough insights into human decision-making.”

Griffiths earned accolades for his 2016 book, “Algorithms to Live By/The Computer Science of Human Decisions,” co-written with his friend, nonfiction author Brian Christian. The editors of MIT’s Technology Review chose it as one of the “Best Books of 2016,” and Forbes listed it as a “must-read brain book” for the year.

At the core of his work is how to mine “big data” — the sea of information, much of it unstructured, that spews from the internet of things — for insights that lead to better decisions. In his 2014 “Manifesto for a new (computational) cognitive revolution,” published in the journal Cognition, Griffiths wrote that “my vision is of a very different kind of laboratory for studying the mind — one where the rich information about our behavior that is collected ubiquitously by our devices is fodder for evaluating theories of cognition, and where theories of cognition play a central role in how that information is used.”

Added Griffiths: “Ultimately I want to be able to describe human intelligence in the form of a mathematical theory. Doing so creates two opportunities: reproducing those same abilities in a computer, and identifying the ways in which computation can further support human intelligence.

“The way my students and I do that is to think about the abstract computational problems that human beings face, and then compare their ideal solutions to what people actually do. This usually means drawing on ideas from artificial intelligence, machine learning and statistics, and then running behavioral experiments in the lab or online to determine how people behave in different situations.

“As a result of doing this, we are able to gain insight into some of the things that people currently do better than computers — learning from small amounts of data, inferring complex causal relationships, reasoning about our physical world, and interpreting the actions of other people — and also identify some of the situations where human behavior could be improved upon.”

By creating algorithms that explain why people often choose to do seemingly bizarre things in specific cases, Griffiths believes computers will reinforce human rationality, that is, help people better align what they do with what they should be doing, based on their long-term goals rather than peripheral considerations.

Griffiths says Princeton is an ideal place to continue his interdisciplinary research, and he looks forward to working with new colleagues, not only from psychology and computer science but also philosophy, sociology, neuroscience, evolutionary biology, economics, operations research, statistics and mathematics.

“In addition, there has recently been a lot of exciting growth in cognitive science, machine learning and computational social science on campus, and I am also looking forward to playing a role in building up those programs,” he said. “I really see computation as a principle that is increasingly at the heart of many different disciplines, and I think Princeton is doing a great job of pursuing a similar kind of vision.”

Griffiths, who was born in the U.K., earned his bachelor’s degree in psychology at the University of Western Australia before moving to California to study at Stanford University, where he earned master’s degrees in psychology and statistics and his doctorate in psychology. He spent the second half of his doctoral work at the Massachusetts Institute of Technology’s Department of Brain and Cognitive Sciences as well as the Computer Science and Artificial Intelligence Laboratory.

In 2017, Griffiths was awarded a fellowship by the John Simon Guggenheim Memorial Foundation.