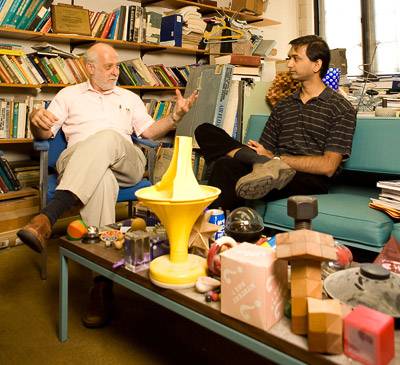 Princeton researchers Herschel Rabitz (left) and Raj Chakrabarti are part of a team that has made a discovery extending Darwin's theory of evolution. Photo: Brian Wilson

A team of Princeton University scientists has discovered that chains of proteins found in most living organisms act like adaptive machines, possessing the ability to control their own evolution.

The research, which appears to offer evidence of a hidden mechanism guiding the way biological organisms respond to the forces of natural selection, provides a new perspective on evolution, the scientists said.

The researchers -- Raj Chakrabarti, Herschel Rabitz, Stacey Springs and George McLendon -- made the discovery while carrying out experiments on proteins constituting the electron transport chain (ETC), a biochemical network essential for metabolism. A mathematical analysis of the experiments showed that the proteins themselves acted to correct any imbalance imposed on them through artificial mutations and restored the chain to working order.

"The discovery answers an age-old question that has puzzled biologists since the time of Darwin: How can organisms be so exquisitely complex, if evolution is completely random, operating like a 'blind watchmaker'?" said Chakrabarti, an associate research scholar in the Department of Chemistry at Princeton. "Our new theory extends Darwin's model, demonstrating how organisms can subtly direct aspects of their own evolution to create order out of randomness."

The work also confirms an idea first floated in an 1858 essay by Alfred Wallace, who along with Charles Darwin co-discovered the theory of evolution. Wallace had suspected that certain systems undergoing natural selection can adjust their evolutionary course in a manner "exactly like that of the centrifugal governor of the steam engine, which checks and corrects any irregularities almost before they become evident." In Wallace's time, the steam engine operating with a centrifugal governor was one of the only examples of what is now referred to as feedback control. Examples abound, however, in modern technology, including cruise control in autos and thermostats in homes and offices.

The research, published in a recent edition of Physical Review Letters, provides corroborating data, Rabitz said, for Wallace's idea. "What we have found is that certain kinds of biological structures exist that are able to steer the process of evolution toward improved fitness," said Rabitz, the Charles Phelps Smyth '16 Professor of Chemistry. "The data just jumps off the page and implies we all have this wonderful piece of machinery inside that's responding optimally to evolutionary pressure."

The authors sought to identify the underlying cause for this self-correcting behavior in the observed protein chains. Standard evolutionary theory offered no clues. Applying the concepts of control theory, a body of knowledge that deals with the behavior of dynamical systems, the researchers concluded that this self-correcting behavior could only be possible if, during the early stages of evolution, the proteins had developed a self-regulating mechanism, analogous to a car's cruise control or a home's thermostat, allowing them to fine-tune and control their subsequent evolution. The scientists are working on formulating a new general theory based on this finding they are calling "evolutionary control."

The work is likely to provoke a considerable amount of thinking, according to Charles Smith, a historian of science at Western Kentucky University. "Systems thinking in evolutionary studies perhaps began with Alfred Wallace's likening of the action of natural selection to the governor on a steam engine -- that is, as a mechanism for removing the unfit and thereby keeping populations 'up to snuff' as environmental actors," Smith said. "Wallace never really came to grips with the positive feedback part of the cycle, however, and it is instructive that through optimal control theory Chakrabarti et al. can now suggest a coupling of causalities at the molecular level that extends Wallace's systems-oriented approach to this arena."

Evolution, the central theory of modern biology, is regarded as a gradual change in the genetic makeup of a population over time. It is a continuing process of change, forced by what Wallace and Darwin, his more famous colleague, called "natural selection." In this process, species evolve because of random mutations and selection by environmental stresses. Unlike Darwin, Wallace conjectured that species themselves may develop the capacity to respond optimally to evolutionary stresses. Until this work, evidence for the conjecture was lacking.

The experiments, conducted in Princeton's Frick Laboratory, focused on a complex of proteins located in the mitochondria, the powerhouses of the cell. A chain of proteins, forming a type of bucket brigade, ferries high-energy electrons across the mitrochondrial membrane. This metabolic process creates ATP, the energy currency of life.

Various researchers working over the past decade, including some at Princeton like George McClendon, now at Duke University, and Stacey Springs, now at the Massachusetts Institute of Technology, fleshed out the workings of these proteins, finding that they were often turned on to the "maximum" position, operating at full tilt, or at the lowest possible energy level.

Chakrabarti and Rabitz analyzed these observations of the proteins' behavior from a mathematical standpoint, concluding that it would be statistically impossible for this self-correcting behavior to be random, and demonstrating that the observed result is precisely that predicted by the equations of control theory. By operating only at extremes, referred to in control theory as "bang-bang extremization," the proteins were exhibiting behavior consistent with a system managing itself optimally under evolution.

"In this paper, we present what is ostensibly the first quantitative experimental evidence, since Wallace's original proposal, that nature employs evolutionary control strategies to maximize the fitness of biological networks," Chakrabarti said. "Control theory offers a direct explanation for an otherwise perplexing observation and indicates that evolution is operating according to principles that every engineer knows."

The scientists do not know how the cellular machinery guiding this process may have originated, but they emphatically said it does not buttress the case for intelligent design, a controversial notion that posits the existence of a creator responsible for complexity in nature.

Chakrabarti said that one of the aims of modern evolutionary theory is to identify principles of self-organization that can accelerate the generation of complex biological structures. "Such principles are fully consistent with the principles of natural selection. Biological change is always driven by random mutation and selection, but at certain pivotal junctures in evolutionary history, such random processes can create structures capable of steering subsequent evolution toward greater sophistication and complexity."

The researchers are continuing their analysis, looking for parallel situations in other biological systems.

Tilghman explores clash of science, politics and religion in talk at Oxford University