Since the Middle Ages, alchemists have sought to transmute elements, the most famous example being the long quest to turn lead into gold. Transmutation has been realized in modern times, but on a minute scale using a massive particle accelerator.

Now, theorists at Princeton University have proposed a different approach to this ancient ambition — just make one material behave like another. A computational theory published Feb. 24 in the journal Physical Review Letters demonstrates that any two systems can be made to look alike, even if just for the smallest fraction of a second. 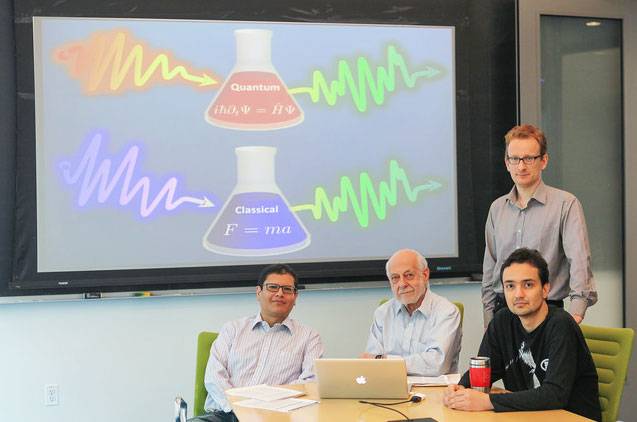 Since the Middle Ages, alchemists have sought to transmute elements, the most famous example being the long quest to turn lead into gold. Now, theorists at Princeton University have proposed a different approach to this ancient ambition — just make one material behave like another, even if just for the smallest fraction of a second. The researchers are, left to right, Renan Cabrera, an associate research scholar in chemistry; Herschel Rabitz, Princeton's Charles Phelps Smyth '16 *17 Professor of Chemistry; associate research scholar in chemistry Denys Bondar; and graduate student Andre Campos. (Photo by C. Todd Reichart, Department of Chemistry)

In this context, for two objects to "look" like each other, they need to reflect light in the same way. The Princeton researchers' method involves using light to make non-permanent changes to a substance's molecules so that they mimic the reflective properties of another substance's molecules. This ability could have implications for optical computing, a type of computing in which electrons are replaced by photons that could greatly enhance processing power but has proven extremely difficult to engineer. It also could be applied to molecular detection and experiments in which expensive samples could be replaced by cheaper alternatives.

"It was a big shock for us that such a general statement as 'any two objects can be made to look alike' could be made," said co-author Denys Bondar, an associate research scholar in the laboratory of co-author Herschel Rabitz, Princeton's Charles Phelps Smyth '16 *17 Professor of Chemistry.

The Princeton researchers posited that they could control the light that bounces off a molecule or any substance by controlling the light shone on it, which would allow them to alter how it looks. This type of manipulation requires a powerful light source such as an ultrafast laser and would last for only a femtosecond, or one quadrillionth of a second. Unlike normal light sources, this ultrafast laser pulse is strong enough to interact with molecules and distort their electron cloud while not actually changing their identity.

"The light emitted by a molecule depends on the shape of its electron cloud, which can be sculptured by modern lasers," Bondar said. Using advanced computational theory, the research team developed a method called "spectral dynamic mimicry" that allowed them to calculate the laser pulse shape, which includes timing and wavelength, to produce any desired spectral output. In other words, making any two systems look alike.

Conversely, this spectral control could also be used to make two systems look as different from one another as possible. This differentiation, the researchers suggested, could prove valuable for applications of molecular detections such as identifying toxic versus safe chemicals.

Shaul Mukamel, a chemistry professor at the University of California-Irvine, said that the Princeton research is a step forward in an important and active research field called coherent control, in which light can be manipulated to control behavior at the molecular level. Mukamel, who has collaborated with the Rabitz lab but was not involved in the current work, said that the Rabitz group has had a prominent role in this field for decades, advancing technology such as quantum computing and using light to drive artificial chemical reactivity.

"It's a very general and nice application of coherent control," Mukamel said. "It demonstrates that you can, by shaping the optical paths, bring the molecules to do things that you want beforehand — it could potentially be very significant."