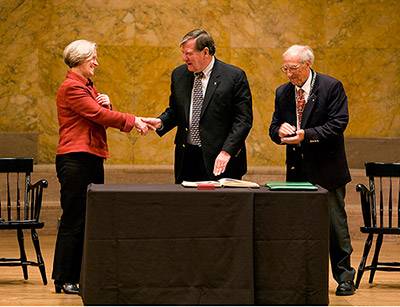 Two leading scholars in the fields of education and science were recognized Tuesday, Nov. 11, at the 25th annual award ceremony of the World Cultural Council. The event was hosted by Princeton University.

Each year, the World Cultural Council chooses two leading scholars from around the world -- one in the field of science and, in alternating years, the second either in education or the arts -- whose work benefits society and selects a university to host the annual awards celebration. This is the first year in the 25-year history of the ceremonies that the council's awards committee has selected a member of the host institution for one of the international World Awards.

At the beginning of the ceremony, Princeton President Shirley M. Tilghman said she was "delighted that two such accomplished individuals will be honored on our campus today." She added, "Both honorees have made a far-reaching contribution to the welfare of their fellow men and women, one through her pioneering research in the field of structural biology and one through his leadership in the realm of higher education. They richly deserve the awards to be conferred on them this afternoon." 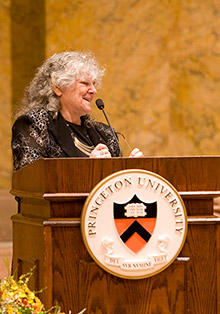 Ada Yonath of the Weizmann Institute thanks the people who helped support her research studies as she accepts the World Cultural Council's 2008 Albert Einstein World Award of Science. Photo: Brian Wilson

Yonath, who is the director of the Helen and Milton A. Kimmelman Center for Biomolecular Structure and Assembly at the Weizmann Institute for Science in Israel, received the council's Einstein World Award in recognition of her contributions to protein biosynthesis in the field of ribosomal crystallography. Techniques she developed are now used routinely in many laboratories, with applications in the development and design of new antibiotics.

Bowen, who served as Princeton's president from 1972 to 1988 and also is president emeritus of the Andrew W. Mellon Foundation, was recognized for his work promoting the use of technology in education, in addition to creating educational opportunities for individuals who historically were disadvantaged in the college admission process by race, gender or socioeconomic background.

Bowen and Yonath shared perspectives on their work in academic lectures the day before the awards ceremony. Yonath's lecture was titled "The Stunning Architecture of the Ribosome and the Wisdom of Its Antibiotics." Bowen spoke on "Disparities in Educational Opportunity in the U.S.: Causes and Cures."