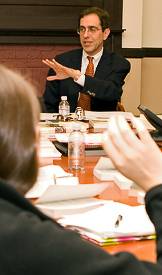 Christopher Eisgruber lends his dual perspectives as Princeton's provost and a legal scholar to the discussion of universities' role in society in the freshmen seminar "In the Service of All Nations? Elite Universities, Public Policy and the Common Good."

A year ago, Princeton's current freshmen were entrenched in the college application process, seeking the best fit for their own aspirations. This semester, 15 of those students are continuing to scrutinize colleges and universities in a new freshman seminar that focuses on higher education's broader value to society.

"In the Service of All Nations? Elite Universities, Public Policy and the Common Good," led by Provost Christopher Eisgruber, covers the many benefits that colleges and universities offer in providing young people with a gateway to a successful future, producing critical scientific discoveries, addressing pressing social problems and promoting civic engagement. 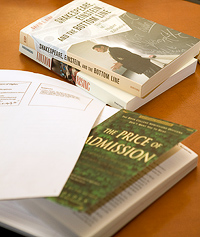 In a recent session, the students debated the ethics of admission preferences for particular groups based on their reading of works by journalist Daniel Golden, public policy scholar David Kirp and economist Ronald Ehrenberg.

The course weighs this societal mission against the criticism that the country's most selective colleges and universities receive on issues such as admission policies, tuition costs and endowment size. In leading the students through public policy controversies related to these and other topics, Eisgruber lends his dual perspectives as the University's second-ranking official and a legal scholar. Class readings include works in law, moral and political theory, history and social science as well as policy briefs and university documents.

"These issues were really important to me during my college search," said freshman Danielle Cohen-Shohet. "I came into the seminar with some prior knowledge as to how certain aspects of admissions were believed to operate. But being in this seminar has put these issues into a different perspective, because I can now discuss them from a different frame of reference -- I am already in college and that stressful application process is over."

Her classmate John Monagle said, "A lot of students in the seminar, myself included, have their own opinions about the college process and preconceived beliefs about how universities run. ... We have international perspectives and perspectives from students from all different areas across the United States, and I think that's been really helpful."

In a recent session, the students debated the ethics of admission preferences for particular groups -- such as athletes, students of color, or children of alumni, faculty or potentially significant donors -- based on their reading of works by journalist Daniel Golden, public policy scholar David Kirp and economist Ronald Ehrenberg.

The topic struck a strong chord with the students, some of whom expressed discomfort about admission preferences while others defended the practice if admission officers are choosing from among equally qualified candidates to advance certain goals, such as promoting diversity.

"The discussions are incredibly thought-provoking. And I think it is the fact that these issues are particularly sensitive ones that make for a great discussion," said Cohen-Shohet. "I find that the success of this seminar's discussion depends on the students' willingness to step out of their comfort zone and voice their opinions while being open to those of others. And my fellow classmates are all contributing in this sense."

Class assignments include an exercise in which students are to imagine that Princeton has added $25 million to its annual operating budget and decide how the money should be allocated. The students will present their reports to members of the University administration and Board of Trustees. University officials also will visit class sessions later in the semester, including President Shirley M. Tilghman, who will discuss the Princeton student experience.

Eisgruber said teaching the freshman seminar gives him a chance to step back and think deeply about ethical and public policy issues. "… for the students -- as well as for me -- this is an opportunity to examine their own ethical responsibilities and to think about how to make the best of their education at the moment they begin their journey through Princeton," he said.

"For me, this seminar is an expression of the Socratic idea that 'the unexamined life is not worth living,'" said Eisgruber, who has been Princeton's provost since 2004 and also is the Laurance S. Rockefeller Professor of Public Affairs in the Woodrow Wilson School and the University Center for Human Values. "In my day job, I am immersed in ethical and public policy issues about the responsibilities of an elite university, but I rarely have the opportunity to step back from those issues and consider them from a philosophical and theoretical standpoint. Working these issues through with the students gives me a chance to do that.

"I had two reasons for wanting to do this course with freshmen," he said. "The first is that Princeton freshmen are always very engaged; freshman seminars are a lot of fun to teach. The second is that for the students -- as well as for me -- this is an opportunity to examine their own ethical responsibilities and to think about how to make the best of their education at the moment they begin their journey through Princeton."

Teaching a pandemic in real time