by Laurie Zazenski, School of Architecture 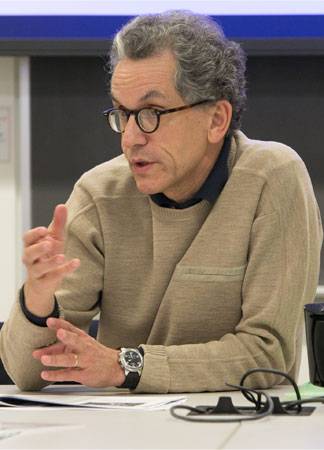 Guy Nordenson, professor of architecture and a structural engineer, facilitates a discussion in one of this fall's freshman seminars at Princeton, "Design, Craft and Ethical Value." The class examines the relationship between architectural and engineering craftwork and ethics, focusing on both the technical and the social aspects of architecture.

Princeton's newest undergraduates set out on a path of inquiry and discovery this fall through the University's freshman seminar program.

A total of 514 first-year students are enrolled this semester in 42 seminars, each of which is held in one of the six residential colleges. Class discussions often continue in informal settings on and off campus, through meals, guest lectures, field trips and other activities.

What are the ethical implications of craft-making?

Seven first-year students are spending their first semester at Princeton seeking answers to this question as part of "Design, Craft and Ethical Value," a freshman seminar taught by Guy Nordenson, professor of architecture.

In 2010, Nordenson was asked to develop a freshman seminar that would forge a link between the School of Architecture and the University Center for Human Values. This fall marks the second time he is teaching the class. "I was interested in the relationship between architectural and engineering craftsmanship with ethics," he said.

Nordenson, a practicing structural engineer, teaches through a broad lens that promotes interdisciplinary learning and attracts students with a variety of academic interests. "My hope is that students gain an interest in the relationship of design, craft and ethics through a number of cultures and historical periods," he said. 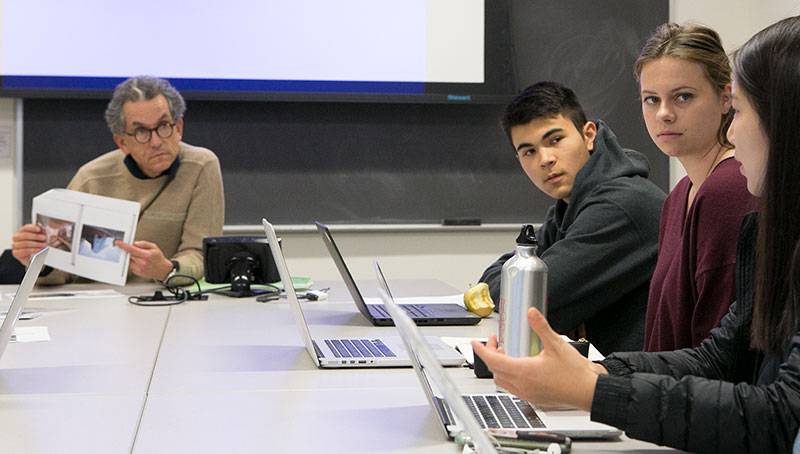 Nordenson teaches the seminar through a broad lens that promotes interdisciplinary learning. Shown with Nordenson above, from left, are Max Jerdee, Emilie Szemraj and Olivia Zhang.

Alyssa Cai, a first-year student from Jackson, New Jersey, who plans to concentrate in electrical engineering, chose to take this seminar to gain a deeper understanding of architecture.

"I am very interested in the ethical aspect of design," she said. "As an aspiring entrepreneur and engineer, I want to know how design and innovation must also meet ethical demands and ideals of society. [The class] has also inspired me to begin shaping my own values and search for the issues that I care about most in order to address them in future projects that I may pursue."

Markos Markakis — a student from Thessaloniki, Greece, who, like Cai, plans to pursue an electrical engineering degree — was looking for a class that was less quantitatively focused than his other courses but still relevant to his studies.

"'Design, Craft and Ethical Value' provides precisely this bridge: One moment we might be talking about architectural and structural properties of the buildings we are examining, while the next one we might turn to their design breakthroughs and community impact," Markakis said. "[The seminar] is as much for people who are interested in the technical side as it is for those looking for the social aspects of architecture."

Topics range from "Beauty from Art to Technology to Science" to "California Carpenters." Readings include texts such as "The Archaeology of Athens," "The Anatomy of Fascism," and "The Rise of DIY, Art, Craft and Design."

Freshman seminars are designed to enable students to build strong relationships with faculty members and classmates in a close-knit intellectual setting. Markakis particularly enjoys the class discussion. With such a small class size, he said students are not just actively encouraged to share their ideas but are required to participate.

"Even though there are assigned readings and the topic for every week is predetermined, students can and do influence the direction the class takes to a noticeable extent," he said. "Everyone has a different opinion [not only] on architectural and artistic issues, but also on social and moral issues, and there isn't always a single 'correct' interpretation or analysis. The discussion ends up complementing the readings and providing a fuller grasp of the topics in question."

Despite their varied interests and knowledge of the subject, Nordenson describes all the students as "very open and hard-working."

Students weigh in on the weekly readings — which include texts such as "The Archaeology of Athens" and "The Rise of DIY, Art, Craft and Design" — before giving individual presentations.

On a recent Wednesday afternoon, the class gathered in the Class of 1976 Hall in Butler College to discuss the week's topic: "Rural Studio — Community Architecture." Markakis and a fellow student led the discussion and presented their interpretations of the readings highlighting the work of American architect Samuel Mockbee, a MacArthur Fellowship recipient known for his socially conscious design ethos.

Mockbee, who died in 2001, ran a successful architectural practice while directing the Rural Studio, a partnership between the Auburn University School of Architecture and residents of Hale County, Alabama, in which students learn the fundamentals of architectural practice by creating affordable yet personalized homes for county residents.

Nordenson dimmed the lights, and Markakis began his presentation with a YouTube video, "Rural Studio: A Story of Solutions," which demonstrated the studio's impact on Newbern, a town in western Alabama.

With the closest fire station nearly 10 miles from Newbern, fires caused mass devastation throughout the town. Rural Studio responded by working with the community to build a fire station there, the first public building constructed in over a century.

"It's remarkable how Mockbee managed to bring to life and coordinate the Rural Studio," Markakis said. "He had a profound impact on a local level through the Rural Studio, but simultaneously managed to work on other projects on the side, which eventually won him the AIA [American Institute of Architects] Gold Medal."

Markakis said the class has already had an impact on his future studies. "This knowledge will significantly influence my approach to my engineering studies at Princeton, providing more elaborate context for everything I learn. It's easy to get caught up in technical details when studying such a discipline, but now I will always try to simultaneously keep an eye on the bigger picture," he said.

Cai said a highlight has been that the class has added a different element to her otherwise STEM-focused schedule. "It has exceeded my expectations in really opening my eyes to how much more there is to learn about architecture and architecture history," she said.