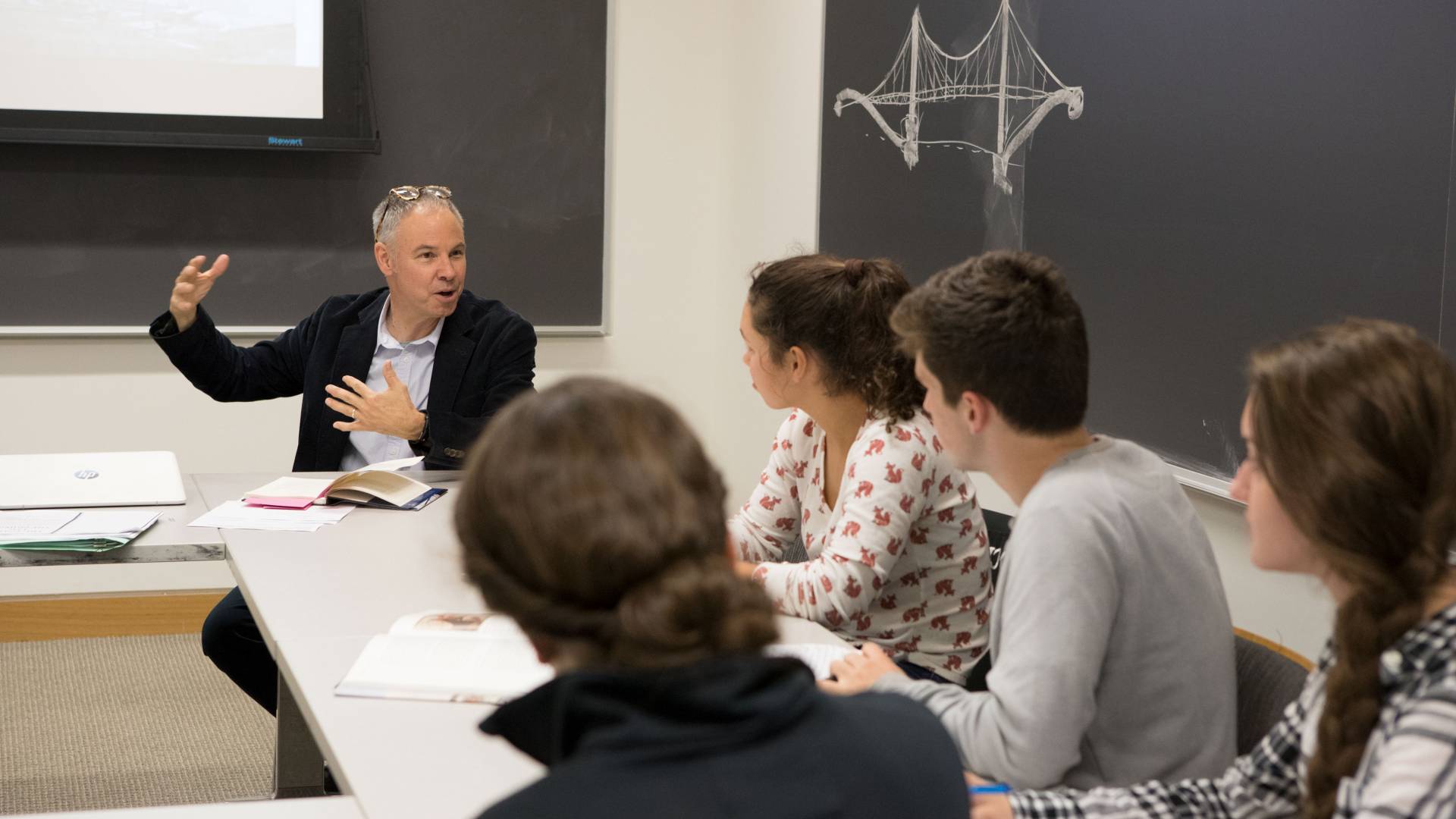 Stan Allen, the George Dutton '27 Professor of Architecture, facilitates a discussion in one of this fall’s freshman seminars at Princeton, “American Places: Architecture, Landscape and the American Imagination.” The class examines the relationship between architecture and identity through case studies.

The students enrolled in the freshman seminar "American Places: Architecture, Landscape and the American Imagination" this fall are learning that while architectural "places" — homes, buildings, urban developments and more — are central to American identity, they are often constructed with complicated histories.

Allen, a practicing architect, is teaching this class for the first time.

"I have an ongoing interest in landscape and its role in forming the American imagination," he said. His premise is that no single medium can adequately capture the complexity of the American imagination. "I conceived this course as an opportunity for students to learn through a wide variety of media — novels, films, poetry, as well as the usual visual material from art and architecture. The subject seemed to be crying out for a cross-disciplinary approach."

Freshman seminars are designed to enable students to build strong relationships with faculty members and classmates in a close-knit intellectual setting. Colorado native Sally Jane Ruybalid plans to pursue an architectural degree at Princeton and said she couldn't pass up the chance to learn from a leader in the field. She says the class provides a deeper understanding of significant places and the stories behind them, and having Allen as a teacher adds even more meaning to the class and topics covered.

Nathaniel Hontz, from Newton, New Jersey, was intrigued by the seminar's description. He thought it offered a fascinating way to explore American culture. "This freshman seminar is a reminder that learning does not have to be stressful, but can be engaging and fun," he said. 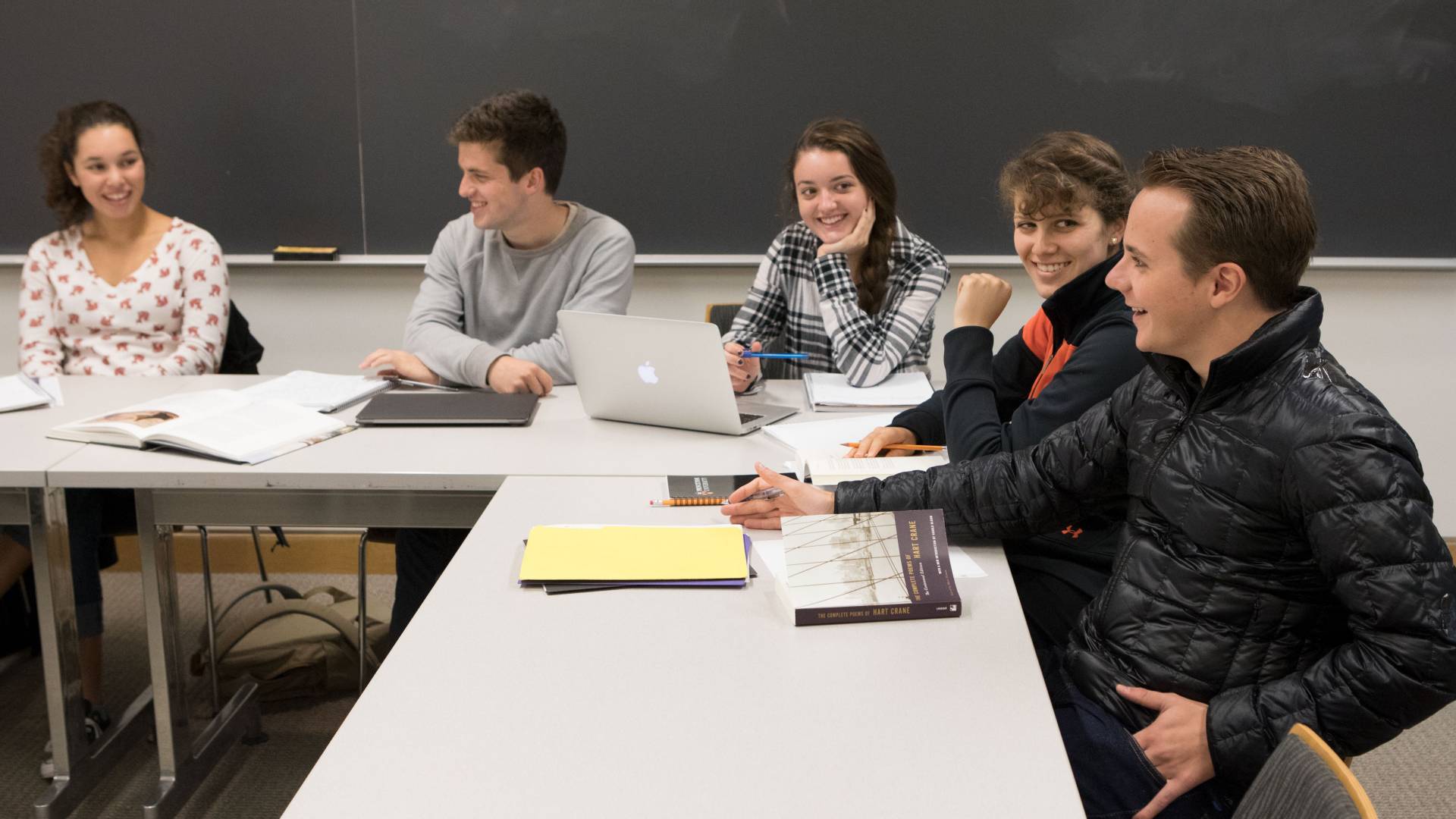 Students respond to a variety of media — maps, poetry, photography and fine art — during an exploration of one case study: the Brooklyn Bridge.

'O harp and altar': Using poetry to illuminate the significance of the Brooklyn Bridge

The Brooklyn Bridge is one of the most iconic structures in New York City. But how did it become so central to our collective cultural imagination?

To begin answering this question, Allen brought the group to the bridge.

Hontz said: "Our trip to the Brooklyn Bridge put our reading and discussion into great perspective. To see images is one thing, but to walk under its massive towers was something else."

"As a New Yorker, I was familiar with the bridge," Newman said. "Benefiting from the background reading as well as Professor Allen's insightful commentary throughout the trip, however, I came to understand it in a whole new light.” 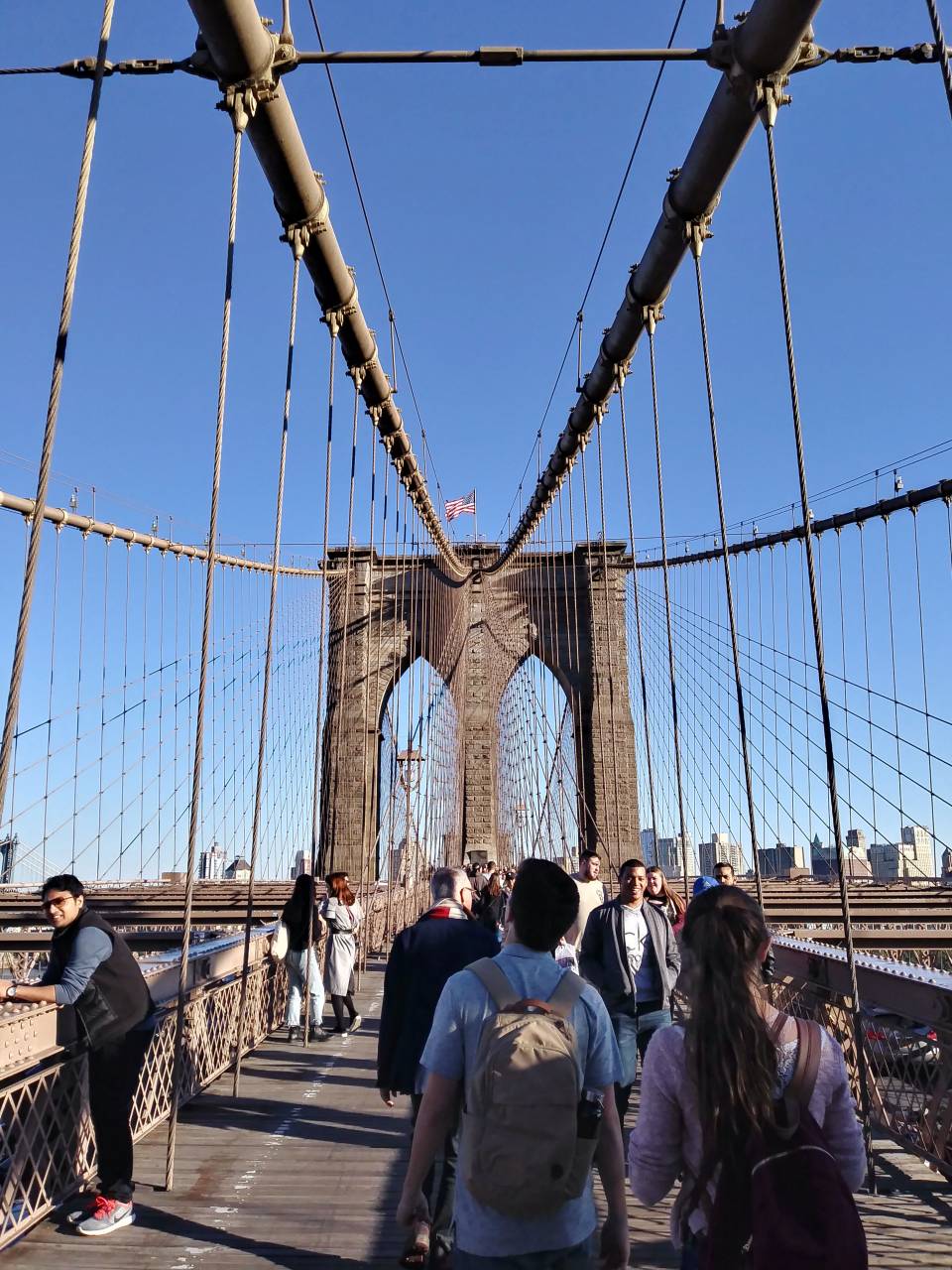 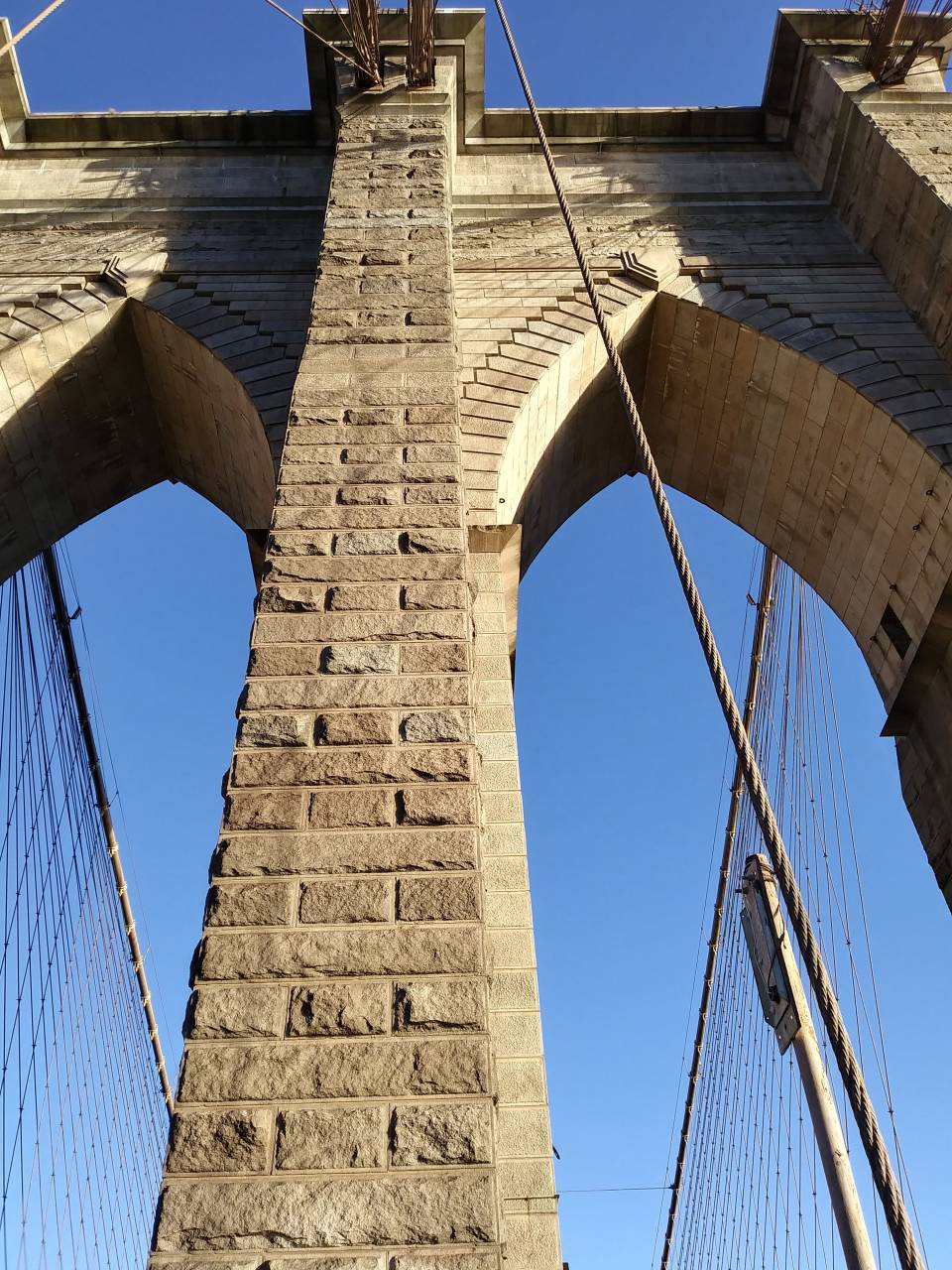 On a trip to the Brooklyn Bridge, students gain a new perspective on the structure, building on course materials and discussions.

Walking under the massive towers of the Brooklyn Bridge is an inspiring moment.

When the class reconvened on campus, Allen used seemingly disparate media to prompt discussion about the different meanings of the bridge. Among the examples in his presentation were a mid-17th-century map of New York City, photographs of Machu Picchu, Picasso's early-20th-century masterpiece "Les Demoiselles d'Avignon" and Hart Crane's poem "The Bridge."

Allen began by reciting the poem's introductory lines:
How many dawns, chill from his rippling rest
The seagull’s wings shall dip and pivot him.

"Pay attention to the repeated invocation of curves and the language of sweeping and swooping, which starts right from the beginning," he said.

He noted Crane's use of the pronouns "thee" and "thou," which appear out of place in a poem written in 1930.

"I get the sense that he was deifying the bridge," Hontz said. "This language is reminiscent of old translations of the Bible. And with 'the curveship lend a myth to God' line, he's writing an ode to the bridge as if you would to God."

His classmates nodded in agreement.

Allen continued reading aloud:
O harp and altar, of the fury fused,
(How could mere toil align thy choiring strings!)

"This speaks to the array of diagonal cables. Crane is understanding the bridge as a harp," he said.

"There's the idea that the harp is tuned to some kind of heavenly music," Allen continued. "The expertise of the engineer and the human labor that went into the construction of the bridge have achieved something that almost looks like it came from God. It seems like it's something beyond the capacity of man-made labor."

"Does this constitute modern poetry?" one student asked.

Another student observed, "The juxtaposition of the modern images of the subway, the city and the cinemas is quite strange next to 'thy' and 'thee.'"

"Exactly," Allen said. "It is a difficult poem to position because it is, in terms of literary history, understood to be a modernist poem."

Allen describes his students as smart, engaged and eager to learn. "My hope is this course both broadens and deepens their understanding of American identity," he said. "There is no single American identity; it changes with both time and place. This concept is complex enough to support multiple — and sometimes opposing — identities simultaneously.”