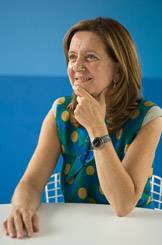 Architectural historian Beatriz Colomina, who is chair of the School of Architecture's Ph.D. program, likes to examine architecture with input from scholars in other fields. "Why think about questions just from the architect's point of view?" she asked. "Bringing people together from different disciplines makes the view clearer."

Historian Colomina infuses 'playful creativity' into study of the field

Architectural historian Beatriz Colomina pushes her students to explore every possible avenue as they conduct research on modern architecture. They have gone to small villages in the French countryside to interview magazine editors, searched personal collections of publications in Vienna and Maastricht, visited archives in Montreal and Tokyo — and even studied the photos in Playboy magazine.

Colomina recently sent some of her students, who are pursuing graduate degrees in architecture, to Playboy's archives in Chicago, where they found reams of evidence that the magazine, in addition to running photos of undressed women, played a critical role in promoting modern architecture and design in the '50s, '60s and '70s.

"There was an old saying that you read Playboy for the articles, but what we have discovered is that you can read it for the architecture," said Colomina, a professor of architecture who has taught at Princeton since 1988. 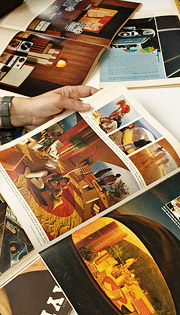 Students find examples of modern architecture and design in old issues of Playboy.

"The magazine provides a detailed record of some of the most important design innovations of the period," she said. "Practically all the leading architects and designers were featured, from Frank Lloyd Wright and Ludwig Mies van der Rohe, to Charles and Ray Eames, Eero Saarinen and radical groups like Antfarm and Superstudio. Their work was presented as an integral part of a comprehensive modern lifestyle, and that lifestyle was made accessible. You only needed to get a Saarinen chair to enter the dream of modern life."

The focus on Playboy is just one example of the way that Colomina pushes boundaries. As chair of the School of Architecture's Ph.D. program and director of Princeton’s Program in Media and Modernity, Colomina has sharply expanded the school's interdisciplinary approach, drawing in professors from art and archaeology, English, German, history, and Spanish and Portuguese. In the classroom, she has spearheaded a team approach for student work that has produced exhibitions seen around the world. She received a President's Award for Distinguished Teaching in 2005 for her inventive approach in the classroom.

Colomina has been equally innovative in her own academic work. Her groundbreaking 1994 book "Privacy and Publicity" considered architecture through the lens of mass media and asserted that modern architecture must be examined in conjunction with advertising, books, fashion, film, photography and other visual forms.

"She has demonstrated how architectural ideas circulate in many different media," said Stanley Allen, dean of the architecture school. And in the classroom, her "collaborative, project-based approach, which works directly with objects and archival materials, has brought a very rich mix of ideas to the school and opened up new avenues of research and collaboration for architects and scholars alike," he added.

Colomina's work "combines theoretical sophistication with a playful creativity," said Rubén Gallo, an associate professor of Spanish and Portuguese languages and cultures and director of the Program in Latin American Studies, who teaches in the Program in Media and Modernity. "She is equally at home discussing Lacanian theory and the architecture of Playboy Mansions." 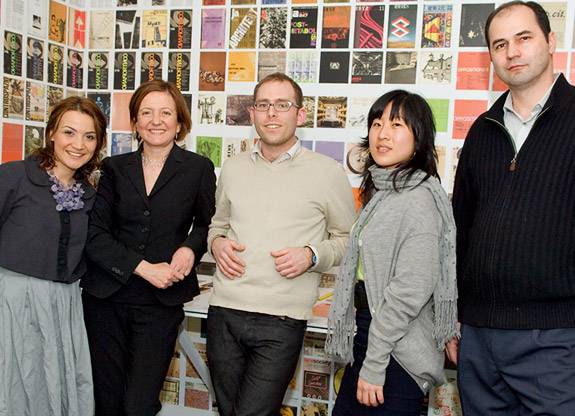 A group of Colomina's Ph.D. students conducted research on a series of short-lived architectural magazines that instigated a transformation of architectural culture. "Clip/Stamp/Fold; The Radical Architecture of Little Magazines 196X to 197X" became an exhibition that has been shown in cities all over the world. Here, Colomina (second from left) and her graduate students (from left) Lydia Kallipoliti, Craig Buckley, Irene Sunwoo and Anthony Fontenot attend the opening of the exhibition's showing at Montreal's Canadian Centre for Architecture in April 2007. (Photo: Courtesy of Canadian Centre for Architecture, Montreal)

Suburban sprawl to the ballpoint pen

Born in Spain, Colomina earned a professional degree in architecture and a Ph.D. from the School of Architecture of the University of Barcelona. After teaching for a few years there, she came to the United States as a research scholar at New York University's New York Institute for the Humanities. The institute, a forum for promoting the exchange of ideas between academics and professionals in various fields, "taught me the importance of an interdisciplinary approach and opened my eyes to all the ways one can think about architecture," Colomina said. She taught at Columbia University for three years before coming to Princeton.

In 2000, Colomina took over as director of graduate studies for the Ph.D. program and redesigned its annual research seminar so that first- and second-year Ph.D. students could work together on a two-year collaborative project. The seminars have yielded in-depth examinations of little-known or forgotten aspects of architecture while giving students the opportunity to learn about collaboration and hands-on research. Each seminar has produced or is in the process of producing a final product — a book, a conference, a documentary film or an exhibition.

"Students get excited about the idea of putting something together, and they learn to communicate to a wider audience" than their fellow academics, Colomina said. "They learn from each other."

The first project examined the myriad innovations during the Cold War period — from suburban sprawl to the ballpoint pen — that transformed physical space and human experience. The essays that the students wrote for the seminar were published by Princeton Architectural Press in 2004 as "Cold War Hothouses." The 2005 project, "Clip/Stamp/Fold; The Radical Architecture of Little Magazines 196X to 197X," became an exhibition that has been shown in nine cities — including Barcelona, Montreal, New York and Oslo — since 2006 and is still touring. The project examines a series of short-lived architecture magazines from the early 1960s to the end of the 1970s that instigated a radical transformation in architectural culture. The study of Playboy magazine is this year's project.

Graduate student Lydia Kallipoliti, who worked on the "Clip/Stamp/Fold" project, called it "the single most significant educational experience for many of the students who participated in the project, including me." 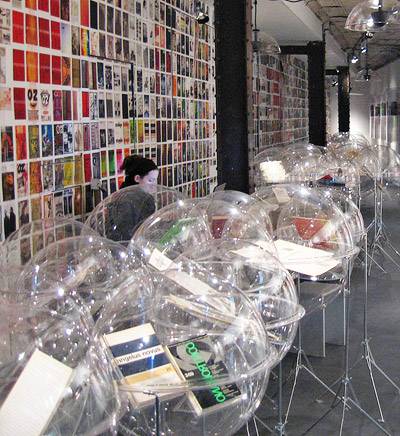 The work was particularly suited to a team approach, according to graduate student Craig Buckley.

"Tackling the material required knowledge of eight or nine different languages ... and the publications themselves were literally scattered across the globe, not only in familiar scholarly terrain such as libraries, museums and archives, but quite often in personal collections, dusty attics and basements," said Buckley, who visited the French village of Theil-rabier and six European cities to interview editors of the magazines. "Only collaborative detective work by a large group could tackle such a task."

The Ph.D. students working on the project got a hands-on lesson in fundraising when they applied for grants to support the exhibition, and they learned about public relations when promoting the New York City opening. They even mounted the exhibition themselves, finding cheap plastic skylights on Canal Street in which to encase the rarest magazines and hanging wallpaper in the gallery that they made from reproductions of hundreds of magazine covers.

"We learned how to work in a team, do scholarly research as a group and promote our ideas to a broad audience," said Kallipoliti, who is finishing her dissertation this year and teaching as an adjunct assistant professor at the Chanin School of Architecture at the Cooper Union in New York City.

"Beatriz has always made her seminars into collaborative projects, treating students as if they were already peers in a collaborative research process," said Buckley, who is currently finishing his dissertation on montage in architectural culture during the 1950s and 1960s, and is director of publications at the Graduate School of Architecture of Columbia University. "She has a knack for identifying areas that have been overlooked by current scholarship and rather than trying to monopolize that field for herself, she invites others into the process of examining it." 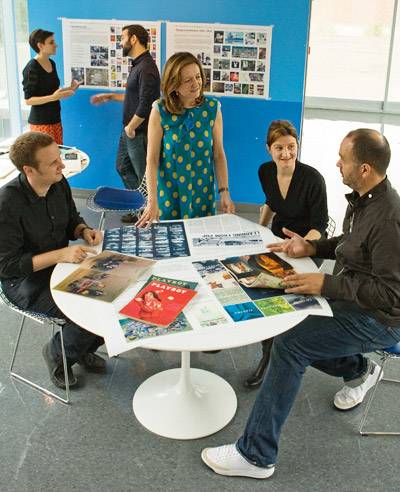 Colomina has spearheaded a team approach that brings first- and second-year Ph.D. students together for a two-year collaborative research project. Students in this year's seminar are studying Playboy magazine which, she said, played a critical role in promoting modern architecture and design in the '50s, '60s and '70s. Colomina, second from left, discusses the Playboy project with, from left, graduate students Marc Britz, Federica Vannucchi and Enrique Ramirez.

The research seminars are part of Princeton’s unique Program in Media and Modernity, which promotes the interdisciplinary study of 20th-century culture by examining architecture, art, film, history, literature, music, philosophy, photography and all forms of electronic media. Under Colomina's direction, the program organizes an array of events and brings together professors from across the University to team-teach topics with interdisciplinary breadth to students from all fields. In the last few years, professors from architecture, art and archaeology, English and German have paired up to teach courses on Dadaism, photographic writing, surveillance, conflict and cooperation among architects and artists, and literature about New York City and Las Vegas.

"She approaches architecture as an expanding discourse that encompasses not only a number of canonical buildings and texts, but also architectural exhibitions, photographs, professional magazines and the popular press," said Spyros Papapetros, an assistant professor of architecture. "Throughout her work, Colomina emphasizes the role of techniques of visual representation — from architectural modeling to X-ray photography — in the general production of architecture, and stresses the unique ability of architecture to generate not only modes of inhabitation but also patterns of cultural behavior."

Colomina's 2007 book "Domesticity at War" looked at the interplay between modern architecture and World War II and described how strenuous domesticity was a hallmark of design in the postwar period. Her current book project, "X-Ray Architecture: Illness as Metaphor," looks at how the development of X-ray technology in the beginning of the 20th century influenced architecture. Those in the medical field were "seeing through the skin of the body — looking at parts of the body that were previously invisible — and architects wanted to do the same thing," Colomina said.

Mies van der Rohe, the pioneering modern architect known for his steel and glass designs, was fascinated by X-rays and assembled a collection of them, Colomina pointed out. "Mies talked about his buildings as 'skin and bones,'" she said. "Where did he get that metaphor from? X-rays."

Colomina herself likes to look into the innards of architecture, with lots of input from those in other fields.

"Why think about questions just from the architect's point of view?" she asked. "Bringing people together from different disciplines makes the view clearer."