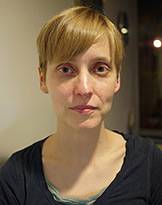 Graphic designer Danielle Aubert and percussionist/composer Jason Treuting will come to Princeton University in the fall to begin two years of teaching and collaboration as the first Fellows in the Creative and Performing Arts.

The Fellows in the Creative and Performing Arts program provides support for early-career artists who have demonstrated both extraordinary promise and a record of achievement in their fields with the opportunity to further their work while teaching within a liberal arts context.

Open to artists in all disciplines, fellows are selected for a two-year residency to teach one course each semester or, in lieu of a course, to undertake an artistic assignment, such as directing a play, conducting a student music ensemble or choreographing a dance with students. Fellows will be active members of the University's intellectual and artistic community while in residence, with access to the resources and spaces necessary to their work.

Aubert and Treuting were chosen from a pool of almost 1,200 applicants. "Given that it was our first year, this process quickly proved to be surprisingly competitive," said Michael Cadden, chair of the Lewis Center for the Arts and senior lecturer in theater. "We were inundated with truly extraordinary candidates from every conceivable discipline — artists who have much to offer the world in terms of vision, craft, intellect and commitment.”

"We are very pleased to welcome Danielle and Jason to Princeton's creative community and look forward to the gifts they will bring to our students, our faculty and the larger Princeton regional community," Cadden said.

The Mellon Foundation awarded Princeton a $3.3 million challenge grant in September 2012 to endow and launch the program, which was matched by an anonymous alumnus. The program is also supported through the $101 million gift from 1955 alumnus Peter B. Lewis, which established the Lewis Center for the Arts. Creating the fellowship program is a component of a 2006 University initiative to make the arts central to the Princeton undergraduate experience.

Aubert is an assistant professor at Wayne State University in Detroit and author of "16 Months' Worth of Drawings in Microsoft Excel" (2006, Various Project). In 2008, Aubert began designing the quarterly journal Criticism, which in 2012 was selected to be a part of the 25th Brno Biennial of Graphic Design in the Czech Republic. In 2009, she and Lana Cavar co-founded the International Typographical Union. Together they have made a series of projects that explore paper distribution and after-market paper and presented work in various venues including the School of Art Institute of Chicago, the Palais de Tokyo in Paris and Motto in Berlin. Also in 2009, Aubert, Cavar and Natasha Chandani launched the group Placement, which edited, wrote for and designed "Thanks for the View, Mr. Mies" (2012, Metropolis Books), about life in Lafayette Park, part of Detroit's Mies van der Rohe Residential District.

"We were impressed not only with Danielle's work but with her ability to see things around the campus and the town that we ourselves had not noticed, as well as her ability to articulate what she saw," Cadden said.

"Given the importance of 'place' in her work, this should have come as no surprise, and I'm certain that she will find central New Jersey a rich repository for her aesthetic project," Cadden said. "Danielle is particularly fascinated by how the obsolete and the discarded can be deployed to artistic ends — an ecological approach to artmaking that will speak to students and colleagues across the curriculum."

Treuting has performed and recorded in venues as diverse as the Brooklyn Academy of Music, the Walker Art Center in Minneapolis, the Andy Warhol Museum in Pittsburgh, Lincoln Center for the Performing Arts in New York City, DOM in Moscow and Le National in Montreal. As a member of So Percussion, which has performed at Princeton, Treuting has collaborated with artists and composers including Steve Reich, David Lang, John Zorn, tabla master Zakir Hussain, the electronic music duo Matmos and choreographer Eliot Feld.

Treuting's compositions include So Percussion's third album, "Amid the Noise," and contributions to "Imaginary City," an evening-length work performed in the Brooklyn Academy of Music's 2009 Next Wave Festival. Recent commissions for other ensembles have included a concerto for So Percussion and string orchestra for the League of Composers Orchestra; music for a video installation in collaboration with Alison Crocetta; and an evening-length collaboration with the choreographers of the Lyon, France-based Projet in Situ. He has taught percussion both in master classes and privately at more than 80 conservatories and universities in the United States and internationally.

"We are so thrilled Jason will be joining the artistic community at Princeton," said Steve Mackey, chair of the Department of Music and professor of music. "In addition to being an accomplished composer and percussionist, he is a consummate collaborator and brings so much to the table — and not just his musical skills. He is, simply put, a complete artist for whom no detail is trivial."

"Our undergraduate and graduate students will benefit from Jason's atypical journey to evolve a personal compositional language and process," Mackey said. "I can see him interacting not just with student composers and musicians but also students in dance and music history, with faculty clamoring to involve him in their classes given his natural gift for speaking to aspiring artists."

Landsman and Malech named Fellows in the Creative and Performing Arts