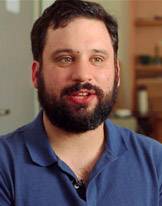 The musicians of the modern percussion ensemble Sō Percussion are the Edward T. Cone Performers-in-Residence at Princeton University. In this video, musicians Adam Sliwinski (above) and Eric Cha-Beach talk about working with students to make innovative music.

Sō Percussion, the ensemble that joined the Princeton University community this year as the Edward T. Cone Performers-in-Residence, is not your typical musical group. According to its musicians, a percussionist is not limited to playing the drums, the bells or even whistles. Instead, this group focuses on nontraditional ways to create sound, such as grinding pencils in a blender or plugging a Slinky into an amp.

Sō Percussion is comprised of four instrumentalists — Eric Cha-Beach, Josh Quillen, Adam Sliwinski and Jason Treuting — who met while studying classical music at the Yale School of Music. All of them were intrigued by the music of John Cage, Steve Reich and Iannis Xenakis, and they did what many people do when they have musical interests in common: They started a group.

As performers-in-residence in the Department of Music, Sō Percussion will teach graduate and undergraduate students, rehearse and perform new works by student and faculty composers, coach chamber music, give masterclasses, and present two concerts from their touring repertoire each academic year.

They have history with the University: In 2009, Sō Percussion started their first annual Summer Institute (SōSI) at Princeton to mentor undergraduate and graduate musicians on the art of percussion. The ensemble members encourage their students to take risks and compose their own music — as shown in the video below featuring the 2014 institute — resulting in a variety of sounds, including full compositions on empty glass bottles.

The ensemble's mission during its residency is to engage Princeton's community on and off campus by being accessible and relatable. With performances in both concert halls and local coffee houses, Sō Percussion is showing the world that a performer-in-residence doesn't have to be traditional; rather, the Department of Music celebrates this group for its versatility, ingenuity and creativity.