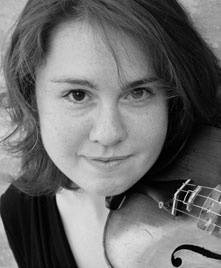 Caroline Shaw, a graduate student in composition in the Department of Music at Princeton University and a New York-based musician, today won the 2013 Pulitzer Prize for music for "Partita for 8 Voices."

Shaw learned of her award Monday afternoon while sitting outside on Pier 65 on 20th Street in Manhattan, where she lives. "Suddenly I started getting a lot of phone calls. I had the feeling 'something is not right, is this right?' so I called my dad and asked him to look it up on the Internet," she said.

Shaw is a member of Roomful of Teeth, a vocal quartet for whom she wrote the "Partita." The work was released on the group's eponymous album on October 30, 2012, by New Amsterdam Records.

The Pulitzer Prize for music recognizes a distinguished musical composition by an American that has had its first performance or recording in the United States during the year.

She said the "Partita" contains "very surprising sounds of the human voice and also some very familiar and rich harmonies."

Shaw, who is also a violinist, has been a musician since the age of 2. She said that the "Partita" channels a lot of the music that she has played and sung. "I've spent a lot of time playing Bach partitas. One of my first jobs was to play for ballet and modern classes, so the music in 'Partita' is kind of like choreography for me."

She added that she was also inspired by "Wall Drawing 305," an installation by Sol Lewitt, a featured artist at the Massachusetts Museum of Contemporary Art, where Roomful of Teeth premiered the "Partita" in four individual parts from 2009-11. Her collaboration with artist Jane Philbrick is also part of a permanent landscape installation at the museum.

Steven Mackey, chair of the Department of Music, said Shaw had very little formal training in composition prior to her arrival at Princeton. "It is both a testament to her prodigious talent — and I dare say our good judgment — that the strength of her musical vision was apparent in the pieces she submitted with her application three years ago," he said. "We were then and continue to be struck by the freshness of her musical voice. It is an original blending of vernacular music, ancient music and avant garde techniques at once fascinating and moving."

Mackey attritubutes the "personal stamp" of Shaw's compositions to her active performing life. "She really knows from the inside what makes a piece work. As a result, her music lives — no, jumps off — the stage rather than sitting passively on her teacher's desk awaiting intellectual critique," he said.

According to Mackey, this is the first Pulitzer Prize awarded in the Department of Music at Princeton. Milton Babbitt was awarded a Pulitzer citation in 1982 for his life's work as a composer.

As do all composition students at Princeton, Shaw works with several faculty members, including Barbara White, a professor of music. "Caroline has a facility for inventing odd and mysterious forms of expression, as in her canny quotations of Baroque idioms or her exploration of the way words and images may attract and elude us," White said.

White called Shaw a "gifted and devoted" musician. "Her daily hands-on experience with music-making infuses her creation of new work. For example, in her compositions for Roomful of Teeth, she explores the physicality of the voice, the cohesion and power of the group, and the remnants of earlier forms of music," White said.

Shaw performs as a violinist with the American Contemporary Music Ensemble (ACME) and works with the Trinity Wall Street Choir, Alarm Will Sound, Wordless Music, Signal, The Yehudim, Victoire, the Mark Morris Dance Group Ensemble and Opera Cabal. Her work has been performed by So Percussion, ACME and the Brentano String Quartet, the Edward T. Cone Performers-in-Residence at Princeton.

While she is thrilled about winning the Pulitzer Prize, Shaw said she is more excited about the attention it is garnering for Roomful of Teeth, which she calls "a great ensemble."

Despite the excitement, it was still business as usual for Shaw. "I have a rehearsal in the city tonight," she said. "I'll celebrate after that."