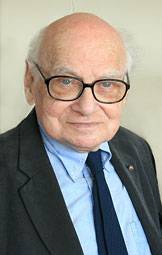 Milton Babbitt, a famed composer and Princeton University music professor whose mathematical expertise guided his creation of complex, modernist soundscapes that influenced generations of artists and scholars, died Jan. 29 of natural causes at the University Medical Center at Princeton. He was 94.

Babbitt, who was Princeton's William Shubael Conant Professor of Music Emeritus, joined the University faculty in 1938 at the age of 22 and retired in 1984. He was a driving force behind the growth of Princeton's Department of Music and was a revered mentor whose students produced compositions and scholarly work in genres ranging from the avant-garde to the Broadway stage.

"He was one of the founding fathers of music as an academic discipline. But first and foremost, he was a brilliant composer whose music speaks for itself," said Paul Lansky, a Princeton music professor who was a student of Babbitt's.

A pioneer of electronic music, Babbitt championed "cerebral music" that forced listeners to carefully follow his structurally complex compositions. His works -- which included seminal pieces such as "All Set" (1957), written for a jazz ensemble, and "Philomel" (1964), which combines synthesizer with soprano voice -- were performed and studied worldwide.

"His music is challenging," said Lansky, who earned his Ph.D. under Babbitt's guidance in 1973 and is now Princeton's William Shubael Conant Professor of Music. "It is not the kind of music that you slide into easily. Its surfaces are dazzling and brilliant, and always sparkle, but he presents you with a challenge in following a thread or an idea. It's not always easy to apprehend the story that he is telling -- it's a complicated story, full of twists and turns and odd diversions. You don't sit back and relish in the sound world -- you have to lean forward and take it moment by moment. But when you do, it's very exciting and quite brilliant."

The demanding nature of Babbitt's compositions reflected his belief that serious music should be pursued with as much intellectual rigor as other, more traditional academic disciplines.

"He was a major force in the explosion of music theory" in the 1950s and 1960s, said his longtime colleague Peter Westergaard, who also is the William Shubael Conant Professor of Music Emeritus at Princeton. "It was a new, highly rational, highly systematic way of thinking about the structure of music. There were others involved, but the key figure in the whole shift was certainly Milton Babbitt."

In a controversial 1958 article published in High Fidelity magazine, Babbitt stressed that contemporary music required "the informed musician to re-examine and probe the very foundations of his art." Serious modern music, he argued, was not for the average listener -- it could be understood only by those with training, similar to learning how to appreciate works in mathematics, physics or philosophy.

"This fall from musical innocence is, understandably, as disquieting to some as it is challenging to others, but in any event the process is irreversible; and the music that reflects the full impact of this revolution is, in many significant respects, a truly 'new' music," he wrote.

The published title of that article -- "Who Cares if You Listen?" -- was added by an editor at High Fidelity without Babbitt's permission. Babbitt was displeased with the notoriety generated by that title, as he felt that it overshadowed the central message of his essay. His original title was "The Composer as Specialist."

"Now obviously, I care very deeply if you listen," he told the Princeton Alumni Weekly in 2006. "From a purely practical point of view, if nobody listens and nobody cares, you're not going to be writing music for very long. But I care how you listen. If someone comes up and says that a piece I wrote is too loud or too dissonant, I'll try to discuss what he means. You tell me what you hear, and then we'll have something to discuss. But most of the people who make those sorts of complaints don't know music."

Babbitt's approach to composition was an extension of the "serial" method pioneered by Austrian composer Arnold Schoenberg in the early 20th century, in which a particular ordering of the 12 notes on the Western scale is used as the basis for the pitch organization of the whole piece. Utilizing his mathematical background, Babbitt was one of the first to expand this serial order approach to other elements, such as rhythm and timbre, in developing his diverse catalog of compositions for chamber ensembles, vocal works, orchestral pieces and instrumental soloists.

"It was his knowledge of math and theory that allowed him to make a convincing argument that music was not just this sort of touch-feely thing -- you could either do it or you couldn't -- but that there was a lot of craft and skill and even computation involved," said Steven Mackey, a professor and chair of the music department at Princeton.

When Babbitt joined the Princeton faculty in 1938, just three years after earning his bachelor's degree at New York University, music classes were taught in the Department of Art and Archaeology. Princeton's music department was established in 1946, and 15 years later it became one of the first in the country to offer a Ph.D. in composition.

Babbitt was a major force in the establishment of the doctoral program in composition, which cemented the department's reputation as a home for innovative music scholarship.

"Milton got a head of steam for the graduate composition program at Princeton being on the cutting edge," Mackey said. "In the 1960s, 1970s and the beginning of the 1980s, everyone knew what was going on at Princeton. Love it or hate it, they associated Princeton with Milton Babbitt and serialism. We have kept the tradition alive of being on the leading edge and going out on a limb with the vanguard of what's going on in music, which he really established at Princeton."

Babbitt, whose father and brother were mathematicians, also taught in the mathematics department at Princeton during World War II. While his mathematical approach was a signature of his own compositions, as a teacher he embraced a wide range of subject matter, focusing on areas such as jazz and popular music, in addition to abstract modern compositions.

"He was a musical citizen who would go to concerts in which other people's pieces were being played, even when he didn't really like the music, because he felt that's what one should do," Westergaard said. "Despite the fact that his own music put him in the outpost of highly cerebral music, he was a great champion of everybody's new music. Even if he didn't think much of it, he thought that everybody should be heard."

In addition to teaching at Princeton, Babbitt was on the faculty of the Juilliard School in New York City from 1971 to 2008. He also had private students, including the Broadway songwriter Stephen Sondheim.

"His main influence was in the notion of music as a serious subject that is worthy of respect and is something that we all take seriously. But he was quite catholic in his tastes," said Lansky, his former graduate student and faculty colleague. "He liked all kinds of music and he never really encouraged his students to follow in his path. But he encouraged his students to think seriously about what they were doing and to take the task as an important and challenging one."

Lansky is now a leading figure in electronic music, the field in which Babbitt made pioneering contributions. Babbitt helped to establish and co-directed the Columbia-Princeton Electronic Music Center in New York City, which housed the RCA Mark II Electronic Music Synthesizer, the first American machine designed for the production of electronic music. The machine, which stood seven feet high and 20 feet wide, was the vehicle for some of Babbitt's most satisfying moments as a composer beginning in the late 1950s.

"Electronic music is wonderful! You walk into a studio with a piece in your head and walk out with a total composition and a tape in your hand," he told the Princeton Weekly Bulletin in 1984. "You are the composer, the performer, everything. Now all you need is a tape machine and good speakers on which to play it. You are finally free of the terrible problems of rehearsals and concert halls and performers and the endless copying of the score."

As he moved into the forefront of electronic music, Babbitt scoffed at the backlash connected with this untraditional genre.

"Electronic music is just what its name suggests: music produced by means of 'instructed' electronic oscillations. To produce it electrically should be no more alarming than producing it with that oddly shaped wooden box equipped with taut strings which we call a violin," he wrote in a 1960 essay titled "The Revolution in Sound: Electronic Music."

After he joined the Princeton faculty in 1938, Babbitt continued to study under the Princeton professor and renowned composer Roger Sessions, who had brought him to the University after working privately with Babbitt in New York. Babbitt earned a master of fine arts degree in 1942, and then set out to write a doctoral thesis.

Babbitt completed in 1946 a highly technical dissertation on the mathematics of the 12-tone system pioneered by Schoenberg. Though it was lauded by Princeton mathematics professor John Tukey, who was one of its readers, the dissertation was rejected by the music department, which then only offered a Ph.D. in historical musicology, not in theory and composition. Though it is now considered a groundbreaking work, music scholars of that time did not understand the relevance of Babbitt's thesis.

However, nearly 50 years later, Babbitt's dissertation was resubmitted by his colleagues Lansky and Claudio Spies, who felt his work deserved recognition. Babbitt's thesis was reviewed again by the music department, and his Ph.D. was bestowed in 1992, one year after he received an honorary doctorate from Princeton.

The honorary degree was among many honors and awards received by Babbitt in recognition of his contributions to American music and scholarship. Included were a MacArthur Foundation "genius grant" in 1986 and a special Pulitzer Prize citation in 1982 for "his life's work as a distinguished and seminal American composer."

Born May 10, 1916, in Philadelphia, Babbitt grew up in Jackson, Miss. He began composing and playing the violin as a young boy and graduated high school at age 15.

In addition to his lifelong passion for music and mathematics, Babbitt had an array of interests and was well known as a sparkling wit and voracious reader who could discuss any number of subjects, including philosophy, baseball and horse racing.

"He was one of a kind. He was a nonstop conversationalist -- he could chat up anyone," Lansky said. "I never saw him at a loss for words."

Added Mackey, "He was a hoot. He's one of these people who I use to confirm my theory that the way a composer talks has a lot to do with how their music goes. Milton kept several thoughts going at once and used his vocal register to clarify punctuation. He would juggle six or seven thought balls at a time when he spoke, and it was amazing to listen to."

Babbitt is survived by his daughter, Betty Ann Duggan, and two grandchildren, Julie and Adam. A campus memorial service is being planned for later this spring.