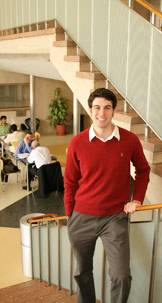 Senior Michael Konialian is studying the technical and political factors associated with an emerging clean-energy technology called oxyfuel for his senior thesis in mechanical and aerospace engineering. Many of the greatest problems facing our society are fundamentally engineering problems," Konialian said. "However, many of the solutions for these problems require innovative policy solutions and international cooperation." Photo: Denise Applewhite

Quintessentially Princeton Inspired by their experiences in and out of the classroom, on campus and abroad, Princeton seniors immerse themselves in thesis projects that are often remembered as the defining experience of their academic careers. The University requires all students to complete a thesis, challenging them to develop as independent thinkers by pursuing original research in close collaboration with a faculty adviser. The April 13 and 20 issues of the Princeton Weekly Bulletin will profile students who have met that intellectual challenge by producing rigorous, inventive works of scholarship in subjects such as religion, astrophysical sciences, mechanical and aerospace engineering, theater and dance, and politics. Related articles:

Knowing he will spend the next two years working in the U.S. State Department, mechanical and aerospace engineering major Michael Konialian wanted to prepare himself by working on a senior thesis project at the intersection of engineering and policy.

He focused on one of today's most demanding problems: climate change.

Konialian is studying the technical and political factors associated with an emerging technology called oxyfuel. This approach proposes burning coal in pure oxygen, rather than air, which makes it easier to separate the greenhouse gas carbon dioxide from the other substances produced during combustion. The concentrated carbon dioxide then could be stored deep underground, possibly in empty oil wells or deep saline aquifers.

"Michael is an exceptional student," said Konialian's adviser Robert Socolow, a professor of mechanical and aerospace engineering and co-director of Princeton's Carbon Mitigation Initiative. "He is a self-starter, resilient and resourceful. He is deeply interested in the interplay of policy and technology in climate change mitigation.

"He has zeroed in on a key project in Europe," Socolow added, referring to the oxyfuel pilot project at Schwarze Pumpe, in Germany south of Berlin. That project's objective is to explore a cheaper way to capture carbon dioxide at a power plant.

Konialian spent spring break in Germany, Sweden and Denmark, visiting the Schwarze Pumpe facility and meeting with executives at Vattenfall, the Swedish power company that operates the pilot plant as well as other ventures throughout Europe.

"The trip gave me a big-picture view," Konialian said. "I went into it thinking that technical challenges were the biggest hurdles for oxyfuel technology, and I came away realizing that the political challenges will be much, much harder to navigate. The concept of putting carbon dioxide underground is quite normal to scientists. But to the general public, it can be awfully scary. There's a new 'NIMBY' -- 'NUMBY': Not Under My Backyard."

Using the Schwarze Pumpe plant as a case study, Konialian is analyzing the motivation behind the development of oxyfuel technology and exploring the technical and political developments that will be necessary if it is to develop fully. Focusing on Europe, he is considering factors -- such as cap-and-trade policies in which companies must purchase government permits to emit greenhouse gases -- that would allow oxyfuel technology to become economically feasible. He emphasizes the need for policymakers to devote more attention to carbon capture and sequestration.

"Many of the greatest problems facing our society are fundamentally engineering problems; one naturally thinks of climate change, energy independence and nuclear nonproliferation amongst others," Konialian said. "However, many of the solutions for these problems require innovative policy solutions and international cooperation."

To help him bridge technology and policy, the Woodrow Wilson School of Public and International Affairs selected Konialian last year as one of six students to receive the University's Scholars in the Nation's Service Initiative scholarship. Undergraduates chosen for the program complete a federal government internship the summer before their senior year. After graduation, they complete a two-year federal government fellowship and the two-year master in public affairs program in Woodrow Wilson School.

Last summer, the Los Angeles native completed an internship in the office of Nina Federoff, science adviser to then-U.S. Secretary of State Condoleezza Rice, working to develop a fellowship program that provides Middle Eastern college graduates with an opportunity to spend a year working for a U.S. technology firm. Next year, Konialian will work on climate change at the State Department, and he hopes to contribute to negotiations for a post-Kyoto Protocol climate treaty in Copenhagen in December. 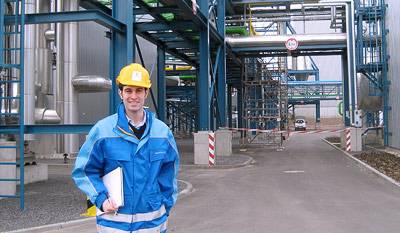 During his time at Princeton, Konialian learned to balance his rigorous academic career with his hobbies, whether participating in a North Indian dance troupe, playing Ultimate Frisbee or catching a movie with friends.

"I've gotten better at balancing my academic workload with all of the extracurricular opportunities that Princeton has to offer," he said.

This year, he shares his insights with freshman engineers through the Engineering Interactor Program. Seniors in this program organize activities, including study breaks, and help freshmen choose classes and think about majors.

Konialian has highly valued his own senior independent work, which was supported in part by a fellowship from the Eugene Wong '55 Fund for Engineering and Policy. He expects to draw heavily on skills honed during his thesis experience in his future career in government.

"This project definitely improved my ability to communicate with people, especially people in different parts of the world and people who speak different languages," he said. "It was essential for me to make sure that people understood what I wanted to do and trusted me in order for them to share information about their work with me. I gained an increased appreciation for differing perspectives on an issue, and learned how to better understand the different factors that motivate different people."