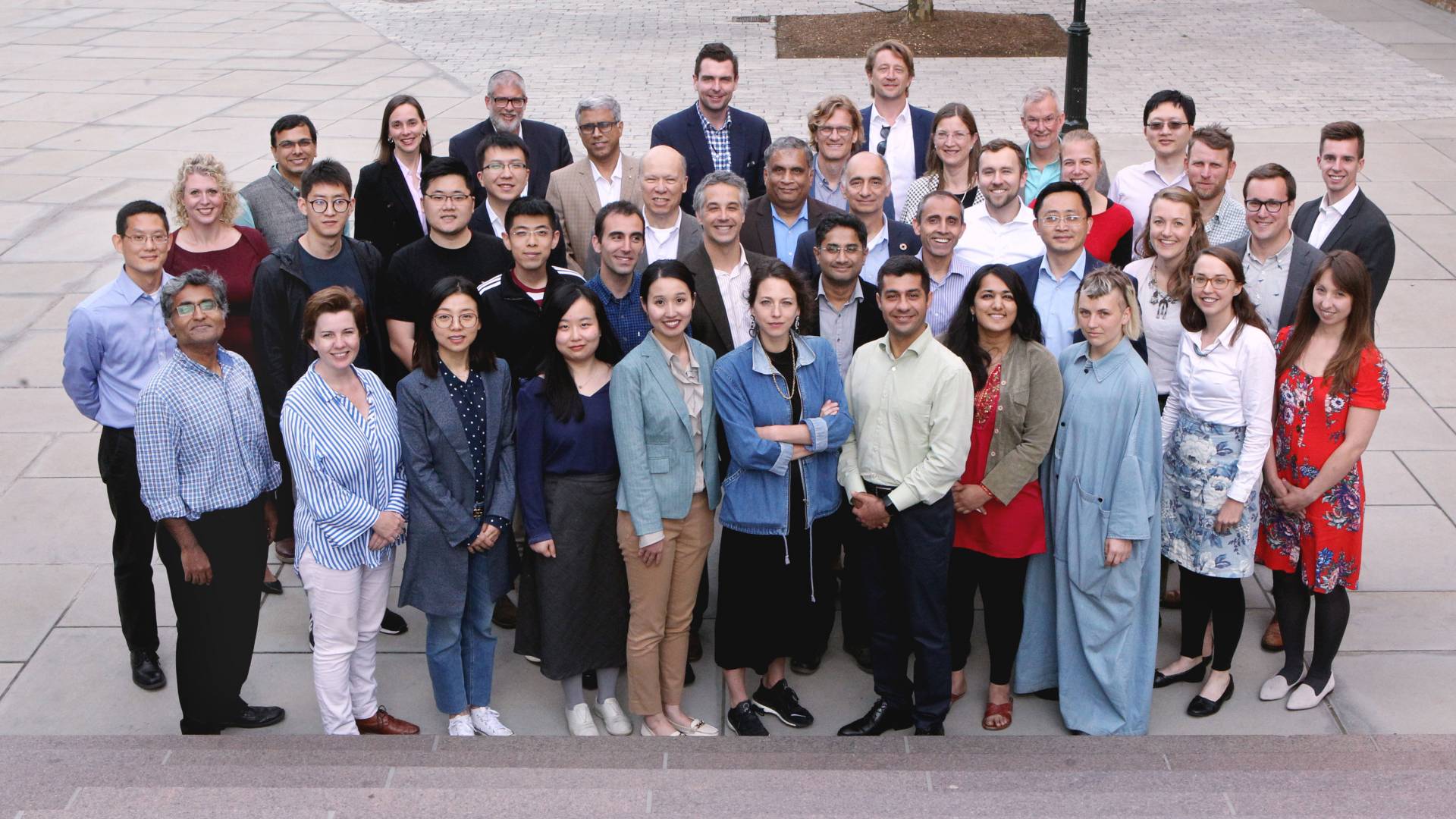 The Andlinger Center for Energy and the Environment convened a group of more than 100 experts from academia, government and industry to begin a five-year project called Rapid Switch. The group aims to develop a global response to climate change that considers massive, ongoing investments in fossil fuel infrastructure, particularly in China and India. Here some participants in the Rapid Switch workshop gather June 12 at the steps outside the Louis A. Simpson International Building.

Princeton University convened an international research team June 11-13 to begin a five-year effort to frame a realistic global response to climate change that accounts for massive economic development in countries, including India and China.

“It is impossible to address the global decarbonization agenda without thinking about the impact of India and China — both how carbon mitigation strategies will affect growth in those countries and how the growth will affect climate action,” said Yueh-Lin (Lynn) Loo, director of Princeton’s Andlinger Center for Energy and the Environment. “How do we move forward while acknowledging where we are and where we need to go from a climate perspective?”

The research effort, called Rapid Switch, seeks to identify more viable decarbonization pathways that acknowledge massive ongoing investments in high-emitting energy systems and looks for existing technologies that can reasonably scale to have the greatest positive environmental impact. In a series of reports, the researchers will identify roadblocks and unintended consequences — technological, economic, social and political — that could slow the deployment of more sustainable technologies with an eye to address these potential bottlenecks before they arise.

“What could slow or stop this switch from happening and how can we overcome or avoid these forces? Are there opportunities where we can accelerate transitions?” asked Chris Greig, one of the lead researchers and a Gerhard R. Andlinger Visiting Fellow in Energy and the Environment at Princeton.

Over 100 experts from academia, government and industry met at the Andlinger Center for the inaugural meeting of the Rapid Switch project. Over the next several years, a core research team based at universities and think tanks in India, China, the United States, Australia and Europe will collaborate to deliver a series of special reports, white papers and scholarly publications geared toward policy and business decision-makers and investors. They will focus on the factors that are stymying progress toward a low-carbon economy, analyzing them sector by sector and region by region.

“Many previous climate strategies have focused on the critical goal of keeping the planet below a certain degree of warming and working backwards to generate scenarios for decarbonization," said Loo, who is also Princeton's Theodora D. '78 and William H. Walton III '74 Professor in Engineering. "Rapid Switch differs from and complements existing models because we're starting with the technologies and the realities on the ground now and asking how rapidly can we effect a transition. Then we can ask: How close does that get us to the climate goals, and what can we do to get there faster?" 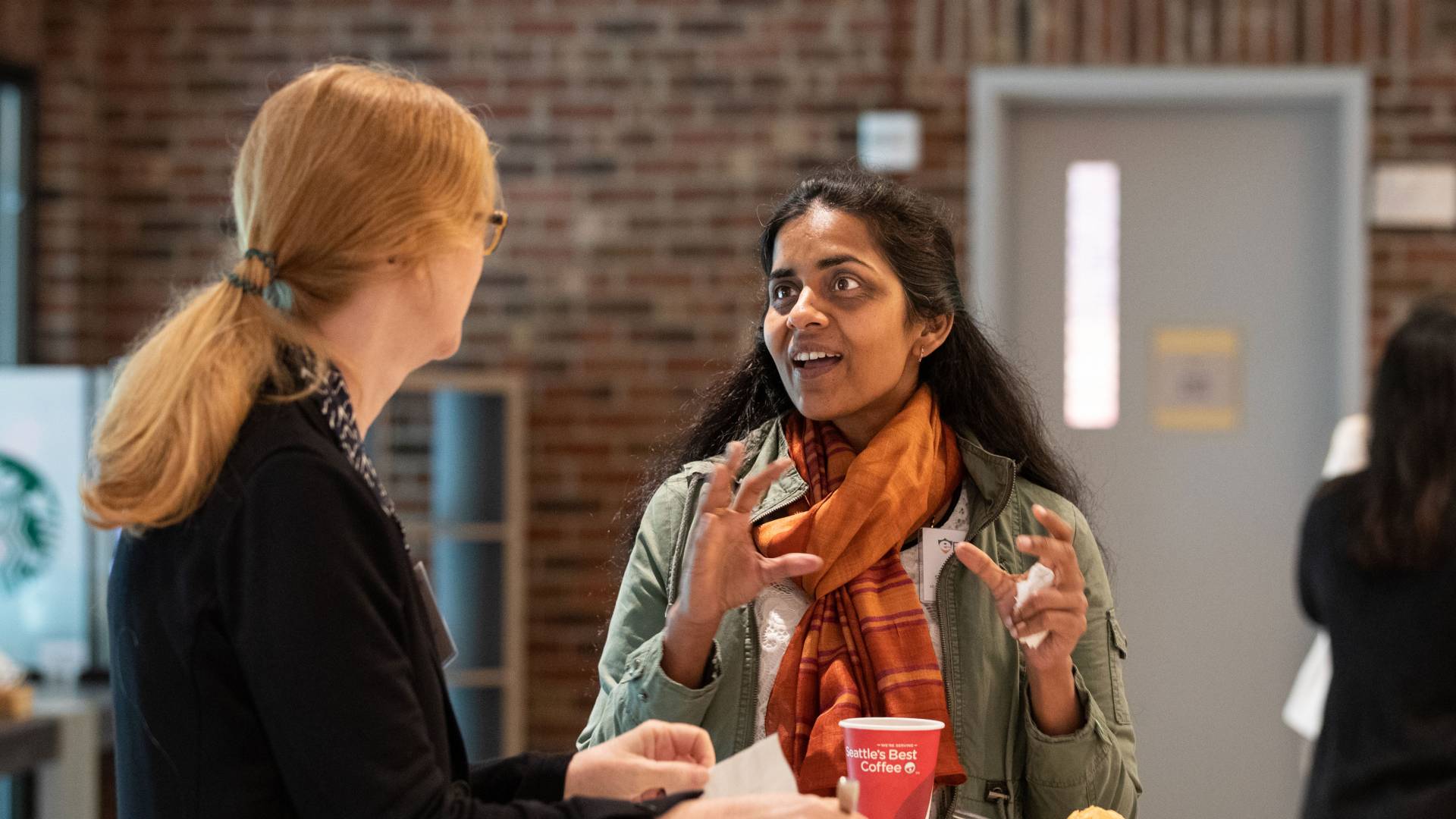 Sindhu Suresh, senior project manager for research and development at Siemens Corporate Technology, connects with a fellow participant at the launch of Rapid Switch on June 11.

Greig, who is also the director of the Dow Centre for Sustainable Engineering Innovation at the University of Queensland in Australia, said three Rapid Switch projects are already underway. One, involving researchers from India, the United States and Australia, is examining low-carbon growth strategies for India. The project explores the technical hurdles of solar expansion, energy efficiency investments and the challenges the incumbent coal sector faces in the country. The second, led by the Andlinger Center’s Energy Systems Analysis Group, is examining how changes to the power grid and market in the mid-Atlantic states could promote wind, solar and other low-carbon energy sources.

A third project at Princeton, led by investigators at the Andlinger Center and Princeton Environmental Institute, is critically assessing the cost and execution schedule risks, along with potential bottlenecks, for various pathways to achieve a zero-carbon economy in the United States by mid-century.

In the three days of meetings, the group of international researchers discussed the nuts and bolts of how a transition of the world’s energy, transportation and industrial systems could occur. The first day featured a series of interdisciplinary panel discussions including members of Princeton E-ffiliates Partnership, a corporate partnership program administered by the Andlinger Center, to bring perspectives of international industries into the discussion.

The talks demonstrated the challenges of rapidly scaling existing technologies and systems that could help limit the amount of carbon dioxidein the atmosphere, and of decoupling economic growth and energy demand in fast-growing nations. A key idea was leapfrogging, or skipping generations of outdated and often highly polluting strategies, to create economies that are both advanced and sustainable.

Leapfrogging is not an easy task, said Ambuj Sagar, the Vipula and Mahesh Chaturvedi Professor of Policy Studies of Indian Institute of Technology Delhi.

“You need to build up an entire innovation-based economy with domestic manufacturing because vast imports of solar panels or batteries, for example, are expensive and do not yield local job benefits,” said Sagar, who is also the founding head of the institute’s school of public policy. 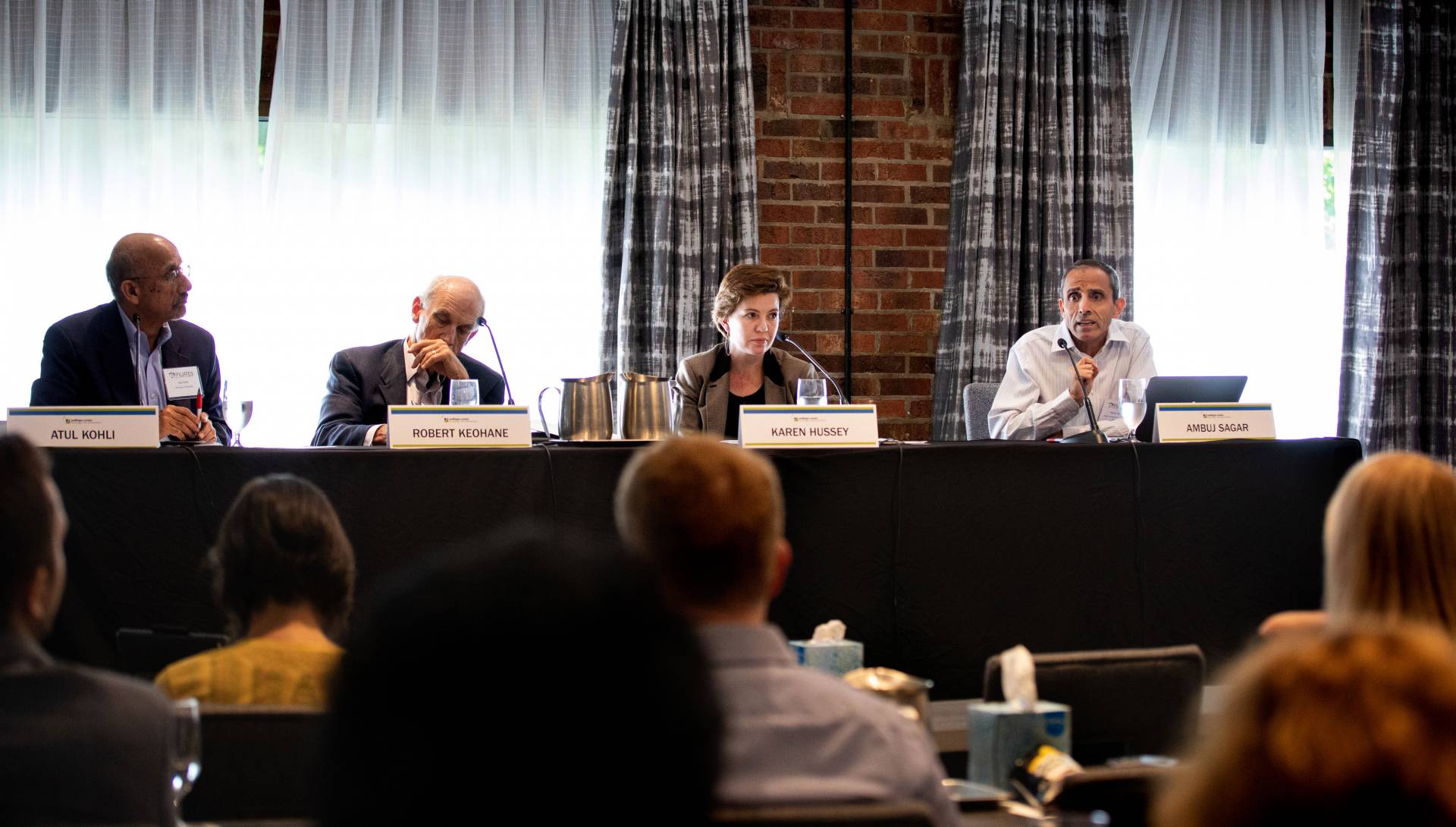 Ambuj Sagar (far right), the Vipula and Mahesh Chaturvedi Professor of Policy Studies of Indian Institute of Technology Delhi, joins panelists Robert Keohane, professor of public and international affairs, emeritus, in Princeton’s Woodrow Wilson School; Karen Hussey, director of the Centre for Policy Futures at the University of Queensland; and moderator Atul Kohli, professor of politics and international affairs at the Woodrow Wilson School, to close out the first day of meetings on Rapid Switch.

In China, the world’s top emitter of greenhouse gases, 80% of carbon emissions are tied to burning coal for heat and electricity. Those coal-fired plants are fairly new, with half of the country’s coal power plants less than 15 years old. Although most have been retrofitted with controls to remove air pollution, such as sulfur and nitrogen compounds, carbon emissions are still a problem.

While the plants are a prime target for carbon reduction, they also represent a tremendous economic investment. Replacing them would not be easy or cheap.

“If you want deep decarbonization, you have to deal with China’s coal,” said Anthony Ku, director of advanced technologies at the National Institute of Clean and Low Carbon Energy, which is part of China Energy, a state-owned power enterprise. As the biggest power company in the world, China Energy produces 15% of the country’s electricity.  “Figuring out how to do that and what the first steps are is where Rapid Switch is really beneficial.”

Some participants noted that it would take at least 400,000 wind turbines to replace the nearly 1,000 gigawatts of coal power capacity in China. Furthermore, the turbines produce power only when the wind blows, pointing to the need for large amounts of energy storage and sophisticated controls for incorporating the wind power into the grid. Compounding the problem is that wind resources in China are largely concentrated inland while the megacities demanding the power, such as Shanghai and Beijing, lie on the east coast of the country. Transporting the power to the coasts would require building large high-voltage transmission lines across the country.

Other discussions focused on the potential of capturing carbon emissions at coal or gas plants and storing the captured carbon deep underground. Researchers said implementing this technology is technically, politically and economically challenging, especially in countries with limited gas and oil pipeline infrastructure.

“It can cost hundreds of millions of dollars and take half a decade to even evaluate places to permanently store the carbon and evaluate the feasibility of building out the infrastructure to transport it,” said Greig, who oversaw feasibility studies for capture and storage for a proposed coal gasification plant in Australia.

“These are the questions we explore — the ones that are being asked by decision-makers today and whose answers will inform whether decades of development are sustainable or not,” said Loo. “That’s why we’ve engaged researchers from institutions across three continents to really explore what stands in the way of decarbonization.” 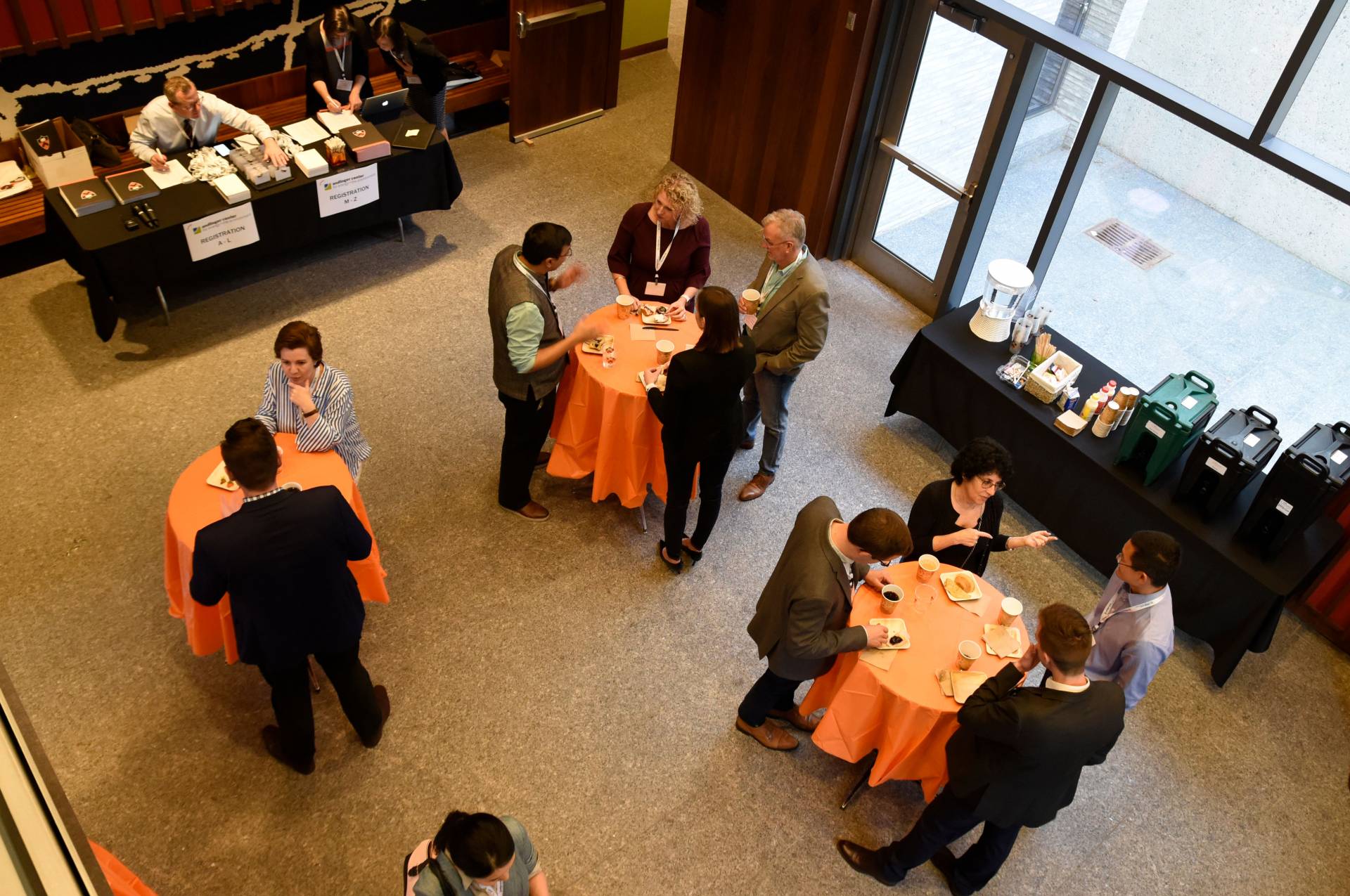 Rapid Switch team members begin to assemble outside Maeder Hall Auditorium at the Andlinger Center for Energy and the Environment prior to the first panel session on June 12.

In addition to Princeton, early partners include researchers at The University of Queensland, the Indian Institutes of Technology in Delhi and Mumbai, and Tsinghua University in Beijing. E-ffiliates members participating in the discussions included ExxonMobil, Public Service Enterprise Group (PSEG), Siemens and American Tower Corporation. They were joined by participants from Dow Chemical, St Baker Energy Innovation Fund, The World Bank and Mercator Partners.

Initial funding for Rapid Switch projects has been provided primarily by Princeton University research awards, with additional contributions from corporate partners in the United States and Australia. Greig said the team intends for the research effort to expand to include universities in Europe, ASEAN nations and South America in its next phase.

Atul Kohli, the David K.E. Bruce Professor of International Affairs in Princeton’s Woodrow Wilson School of Public and International Affairs, concluded the opening day by encouraging the audience to “embrace the reality of the daunting challenge with an intellectual realism, but maintain a will to change it.”