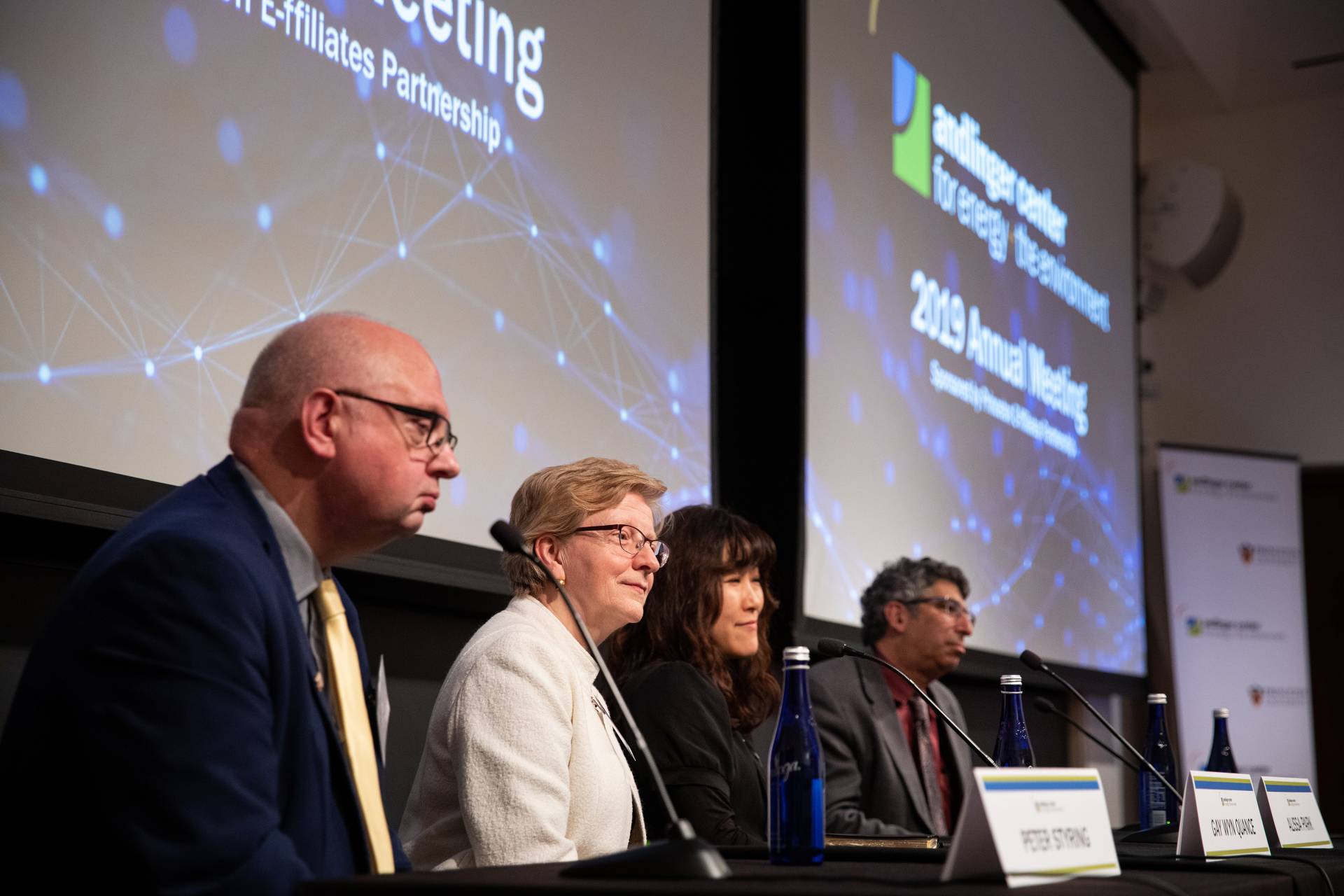 The Nov. 8 annual meeting of the Andlinger Center for Energy and the Environment at Princeton convened corporate leaders, researchers, students and policymakers to discuss a range of topics, including creating new environmentally friendly fuels to sustainably power industries, and transforming atmospheric carbon into useful products. At one session, panelists discussed converting waste carbon dioxide into chemicals and materials. Shown from left: Peter Styring, director of the UK Centre for Carbon Dioxide Utilization and professor of chemical engineering and chemistry at the University of Sheffield; Gay Wyn Quance, CEO of Solid Carbon Products; Ah-Hyung (Alissa) Park, the Lenfest Chair in Applied Climate Science at Columbia University and director of the Lenfest Center for Sustainable Energy at The Earth Institute; and panel moderator Andrew Bocarsly, a professor of chemistry at Princeton.

Cutting carbon emissions quickly requires a price on carbon, experts from industry, government and academia said at the annual meeting of the Andlinger Center for Energy and the Environment last week. A carbon fee would provide a dual benefit: offer direct incentives to cut emissions, and also create a new market for firms that can monetize carbon dioxide as a resource by transforming the gas into products and fuels.

“To curb the effects of climate change, we need to significantly reduce carbon emissions as soon as possible, yet global energy demand is expected to grow by 30% over the next two decades,” said Yueh-Lin (Lynn) Loo, the Andlinger Center director and the Theodora D. ’78 and William H. Walton III ’74 Professor in Engineering. “We must find ways to quickly develop and deploy sustainable technologies.” 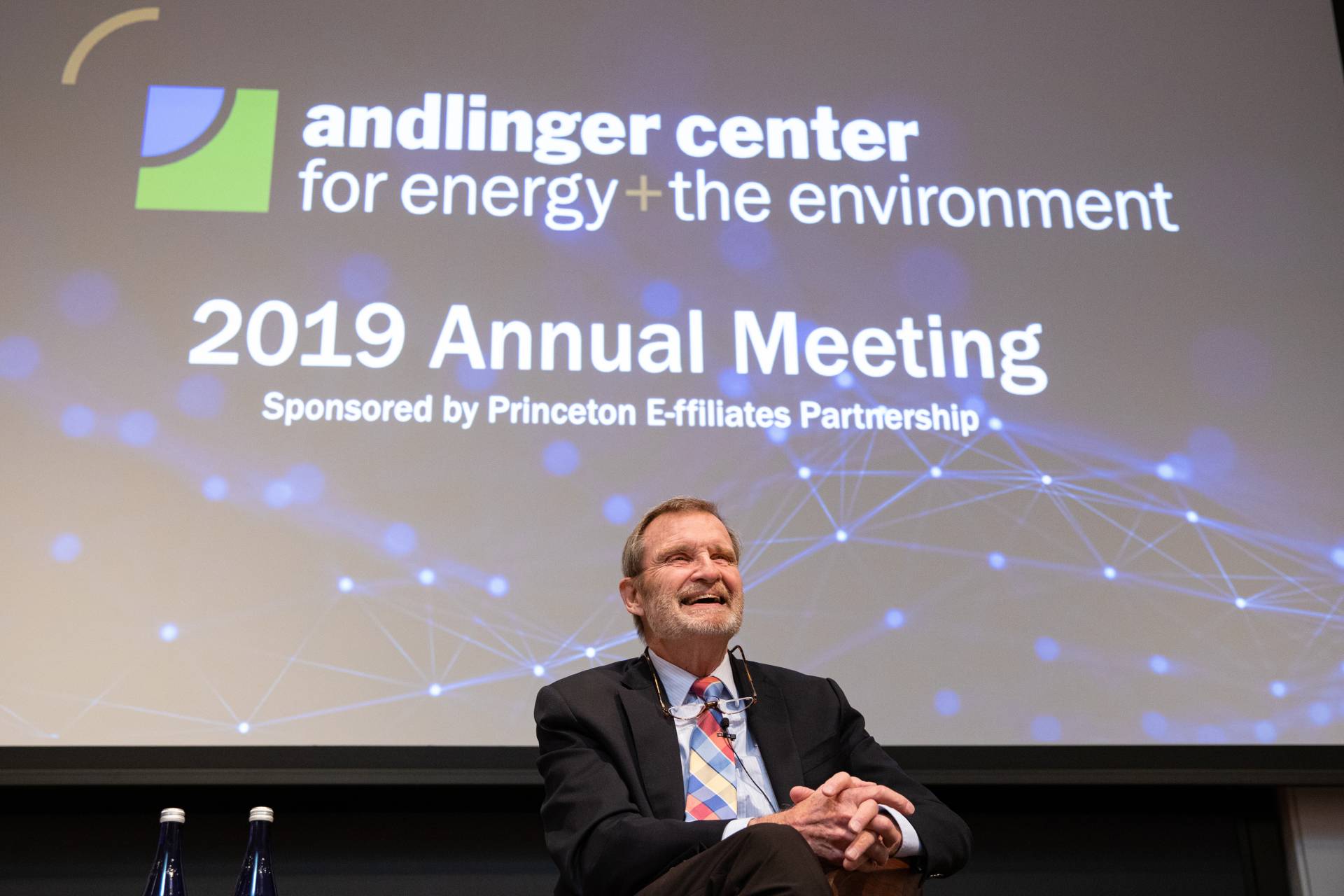 Phil Sharp, former U.S. congressman and previous chair of the Energy and Power Subcommittee, addresses the audience in the morning keynote discussion and advocates for a carbon tax to help meet carbon emissions goals.

A price on carbon would harness the power of the market to create and scale such technologies, the experts said at the center’s eighth annual meeting. A carbon price would generate powerful reasons for entrepreneurs to spark new technology and for industry to move it to a global scale.

Phil Sharp, a former U.S. representative and chair of the House Subcommittee on Energy and Power, in the morning keynote address advocated for a carbon tax, noting that policy is one of the most effective ways to signal to the market the need for emissions reductions and to successfully achieve them.

“That is not to say that this is a sufficient policy for climate but, in my view, and in many others’, it ought to be a central policy,” said Sharp.

David Babson, a program director at the U.S. Department of Energy’s Advanced Research Projects Agency, said that by the year 2100, mitigating climate change will require the annual removal of 20 gigatons of carbon dioxide from the atmosphere, more than the current emissions of the U.S. trucking, oil and gas industries. To do this, society needs to make carbon dioxide removal and utilization profitable.

“The largest industry on the face of this Earth in 2100 is going to be carbon removal and management,” said Babson. “We need to begin to immediately establish and grow a large, robust carbon removal industry … and innovate in a number of areas to address our food, water and resource challenges.”

Babson spoke during a morning presentation on using data science to improve the management of water and energy systems. He was one of 15 experts who spoke at the full-day event on Nov. 8, which convened corporate leaders, researchers, students and policymakers for panel discussions and two keynote speeches. The day featured presentations on a range of topics, including on creating new environmentally friendly fuels to sustainably power industries, and transforming atmospheric carbon into useful products. Participants explored ways to bring disparate fields together to move toward the goal of drastically reducing atmospheric carbon. 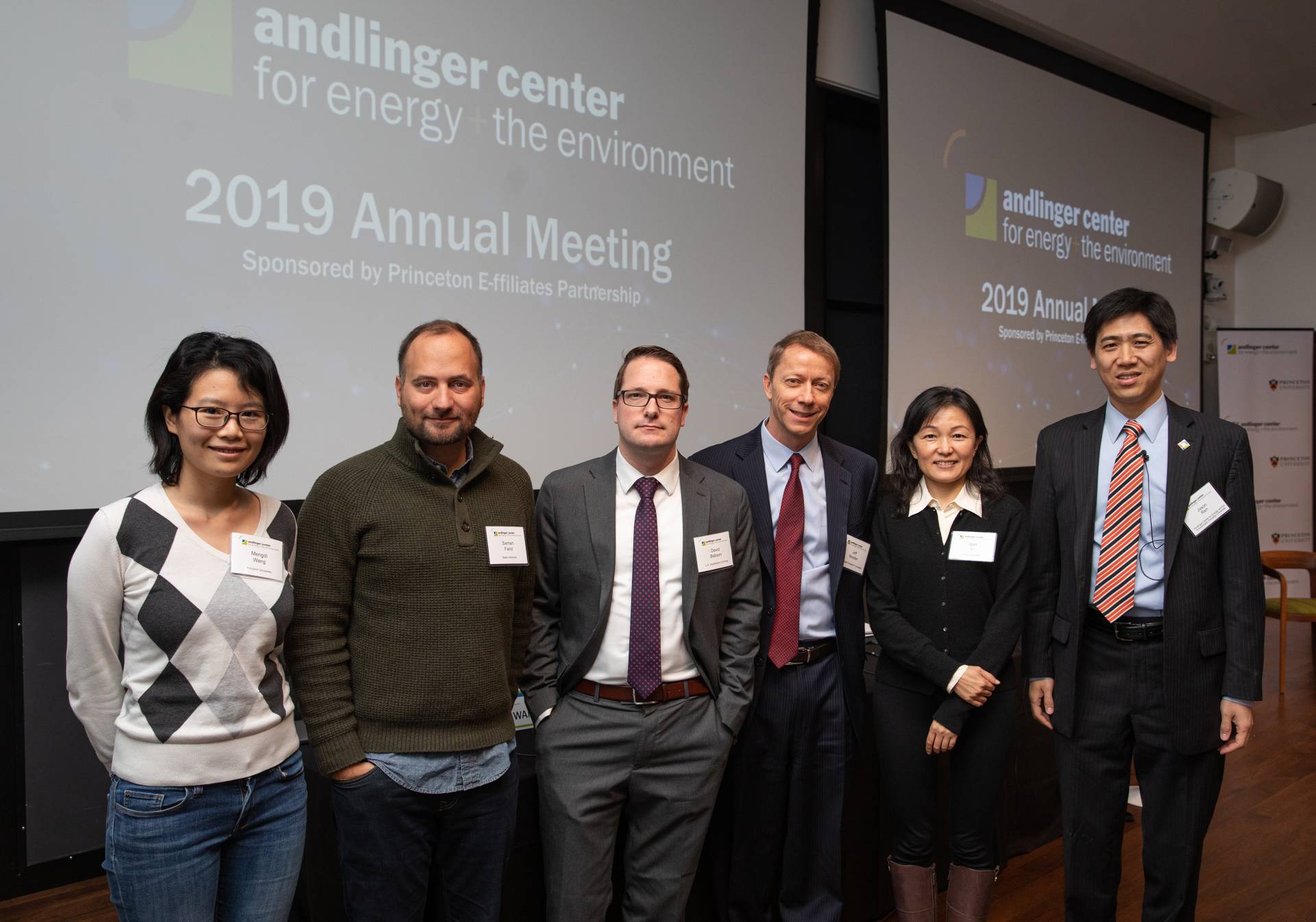 In the afternoon keynote address, David Eaglesham, an entrepreneur who has been involved in several startups in the energy and technology sectors, said incentives have been critical to the introduction of  renewables into the electric grid. But making similar strides to decarbonize the remaining sectors of industry, such as steel and cement production and transportation, will be more difficult. He noted that making those strides will require additional strategies, including using cheap renewable electricity, as opposed to curtailing it when supply exceeds energy demand. Cheap renewable electricity will be crucial to sustainably producing hydrogen fuel. He said a carbon price could be “a critical tool to accelerate the transition that we need.”

Peter Styring, director of the UK Centre for Carbon Dioxide Utilization and professor of chemical engineering and chemistry at the University of Sheffield, told attendees during an afternoon session that industry needs to begin viewing atmospheric carbon as a resource rather than a pollutant. One key step, he said, is using policy to encourage companies to harvest and use carbon dioxide that is already in the atmosphere, rather than separately pulling carbon from the fossil fuels that are in the ground. New policies would create new innovations and industries, enable them to scale, and help curb the effects of climate change. He said there are only two ways to scale new technologies to meet climate goals.

“One is for industry to embrace the technologies and invest in changing [existing] technologies; the second is for government to put a policy push in place to ensure that [such a transition] is allowed to happen,” said Styring.

An existing market is key for startups, said Gay Wyn Quance, whose company, Solid Carbon Products, uses waste carbon dioxide gas from industry and other sources to make materials, like carbon nanofiber. Quance said the business is already profitable but a strong market for recycled carbon would help it thrive and enable the company to produce mass amounts of goods using waste carbon. Andrew Bocarsly, a professor of chemistry ar Princeton, said there is so much carbon dioxide in the atmosphere and different ways to convert it into various molecules, that carbon utilization technologies represent an opportunity for lots of industries and companies. 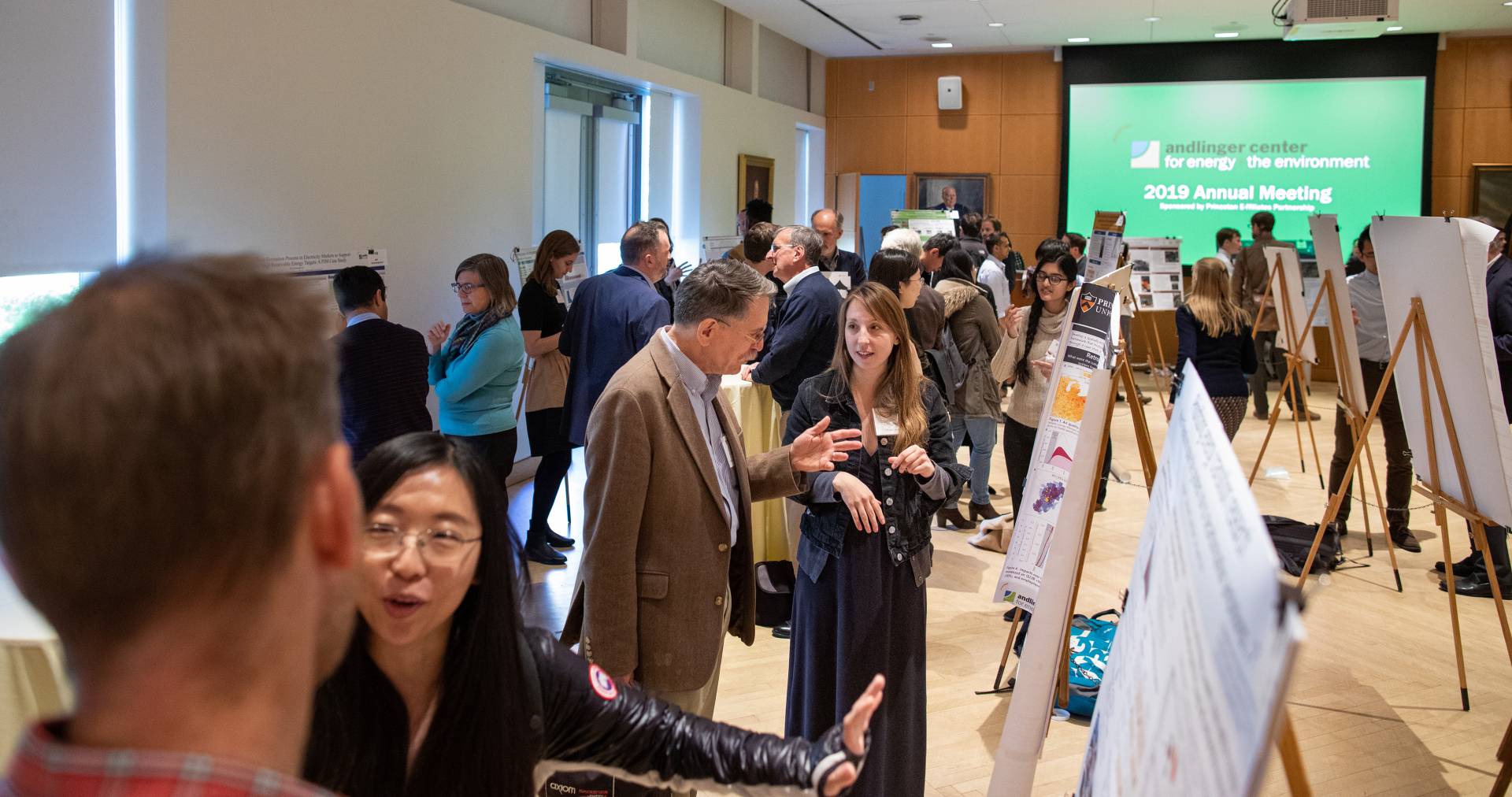 Participants of the annual meeting chatted with undergraduates, graduate students and researchers about their research posters over lunch at the Friend Center.

Gregory Nemet, professor of public affairs at the University of Wisconsin-Madison, said the speed at which new technologies are scaled is also important. Solar power is now transforming the electric grid in many ways, but he said, new technologies need to scale much faster than the solar industry scaled photovoltaics in order to move the needle on climate. Nemet said policymakers should also encourage the flow of knowledge around the world to not only spur technical innovation but, equally critical, to deploy the technologies globally.

Barry Rand, associate director for external partnerships at the Andlinger Center for Energy and the Environment, said that meetings that engage diverse stakeholders are crucial for facilitating this knowledge exchange.

“That’s what we’re doing here — sharing information so that researchers, industry leaders and policymakers can find synergies and ways to bring technologies to market, and swiftly identify and overcome challenges,” said Rand, who is also an associate professor of electrical engineering and the Andlinger Center for Energy and the Environment. “We’re working toward pragmatic solutions.”

The annual meeting was sponsored by Princeton E-ffiliates Partnership, a membership program that engages corporations to collaborate with academic experts to advance research and help move technology into the marketplace. This program is administered by the Andlinger Center for Energy and the Environment.