The U.S. electric utility industry faces a critical juncture as new technology and declining prices allow a more "distributed" system of small-scale generators, renewable energy installations and energy-efficiency strategies, according to a group of high-level energy industry executives and regulators who met at Princeton University recently.

"We have a monumental challenge," said Jon Wellinghoff, chairman of the Federal Energy Regulatory Commission, who participated in the all-day meeting Friday, April 26. Citing commentary by an analyst who warned of a potential "train wreck" in the industry, Wellinghoff outlined converging tends in which technological advances are allowing consumers and companies to take matters of reliability, security and efficiency into their own hands, while utility companies are under pressure to maintain and upgrade a national electricity system that is broadly accessible. 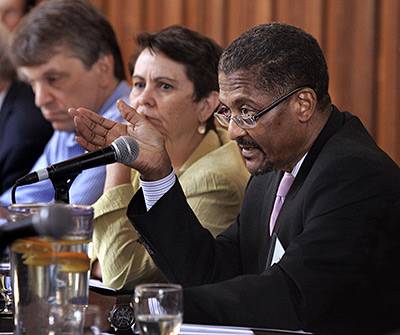 More than 30 high-level executives, regulators and academic experts in the energy industry met at Princeton recently to discuss the rapid emergence of "distributed" energy systems such as small-scale generators, solar installations and other technologies that are not administered centrally. Among the participants were, from right to left: David Owens, executive vice president of business operations at the Edison Electric Institute; Paula Carmody, president of the National Association of State Utility Consumer Advocates; and David Sandalow, acting under secretary for energy and environment at the U.S. Department of Energy. (Frank Wojciechowski )

"Everybody saw the Super Bowl," Wellinghoff said, referring to the half-hour blackout that disrupted the 2013 football championship. "Everybody saw the outages in lower Manhattan [after Hurricane Sandy] very graphically. People will want to have more control. People will want the ability to flip the switch and know that when they flip the switch they are in control."

Noting that such independent systems — known in the industry as distributed energy — create significant potential benefits to society, Wellinghoff called on the 31 assembled executives, regulators and academic researchers to look for agreement about how to set prices that encourage innovation, while continuing to fund the infrastructure needed for people and businesses that rely on centralized, public systems.

The meeting was hosted by the Princeton Energy and Environment Corporate Affiliates Program, which is administered through the Andlinger Center for Energy and the Environment in partnership with the School of Architecture, the Woodrow Wilson School of Public and International Affairs and the Princeton Environmental Institute. The energy company PSEG, which participated in the roundtable, is a charter member of the program. 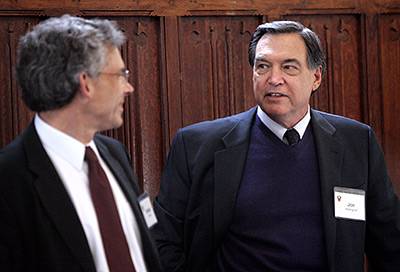 Anne Hoskins, senior vice president for public affairs and sustainability at PSEG and a visiting research scholar at the Andlinger Center, organized the meeting along with Travis Bradford, an associate professor in international and public affairs at Columbia University.

"We decided it was critical to bring the major players together to discuss a new approach for valuing distributed energy and to do it in a neutral and thought-provoking environment, which Princeton provides," Hoskins said.

Participants included two senior administrators at the U.S. Department of Energy; the heads of the public utility boards of Connecticut, New Jersey and New York; the chief executives of two major public utilities, the CEO of a regional transmission organization; the CEO of a competitive solar energy company; the founder of an energy efficiency company, as well as the presidents of solar industry advocacy groups, consumer and environmental advocacy groups and industry consulting groups. 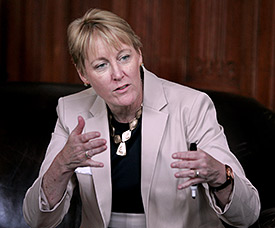 Anne Hoskins, senior vice president for sustainability and public affairs at PSEG, is a visiting scholar at Princeton. PSEG is a charter member of the University's Energy and Environment Corporate Affiliates Program. (Frank Wojciechowski )

"This was an extraordinary group of people to have gotten together," said Jonathan Pershing, the U.S. deputy assistant secretary of energy for climate change policy and technology. "To have the top-level people from many different sectors — to me, that was very valuable."

Industry and regulatory meetings tend to address narrow technical topics, Pershing said, but the Princeton meeting "had a big view, and I think Princeton does big view very well." 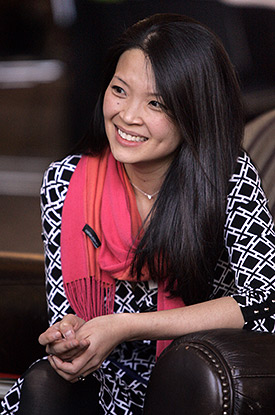 Lynn Loo, professor of chemical and biological engineering, is associate director for external partnerships at Princeton's Andlinger Center for Energy and the Environment. The Andlinger Center administers the Princeton Energy and Environment Corporate Affiliates Program, which hosted the roundtable meeting. (Frank Wojciechowski )

Bradford, who co-hosted the event with Hoskins, said the utility industry is undergoing a transformation similar to that of the telecommunications industry, which was disrupted and reorganized by the advent of the Internet and wireless communications. Realizing the benefits and avoiding the pitfalls of the transition requires effective policy decisions at an early stage, Bradford said.

A key theme at the meeting was the need to change the way various aspects of generating and transmitting electricity are valued and priced. Utility representatives and some regulators expressed concern that if consumers and businesses generate their own electricity and no longer buy as much from utilities, then consumers who don't have the resources to do so will increasingly bear the costs of maintaining the public systems.

"It means you're taking advantage of the system but you're not paying for it," said Jeanne Fox, chair of the Committee on Energy Resources and the Environment for the National Association of Regulatory Utility Commissioners.

"We really need a paradigm shift because of Sandy and extreme weather, as well as cyber-terrorism," Fox said. "You're going to have a lot more people who are able to 'island off.' How is the utility making its money? You still have to pay for the transmission and distribution system." 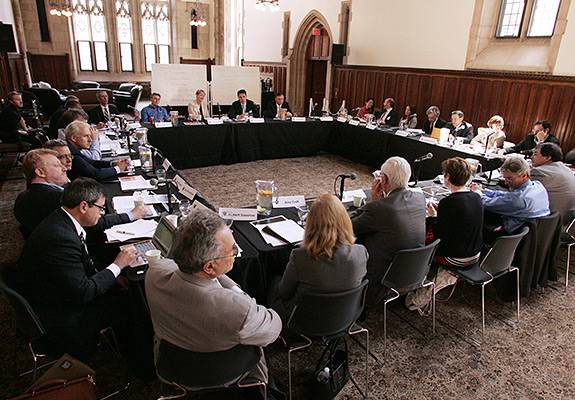 The group discussed the opportunities and challenges of distributed energy, which could bring environmental benefits as well as greater security and reliability for the grid, but could disrupt conventional ways of funding centralized transmission and distribution of electricity. (Frank Wojciechowski )

However, a solar company leader emphasized the need to enable new technologies to take hold before saddling them with legacy network costs. In addition, participants noted that including more renewable energy and distributed tools for increasing energy efficiency could lower pollution and greenhouse gas emissions while creating more security and reliability.

While older technologies such as diesel and gasoline generators could worsen pollution, others, such as solar, wind and high-efficiency cogeneration plants that produce both heat and electricity, are important additions to the grid, said Mark Brownstein, associate vice president and chief counsel for the U.S. Energy and Climate Program at the Environmental Defense Fund.

Another benefit of distributed systems is that it can bring the source of power closer to the consumer, reducing loss of energy in transmission and avoiding disruptions of habitats by not building high-power transmission lines, Brownstein said. In addition, a proliferation of smaller-scale systems could reduce the need for the inefficient practice of keeping large power plants on standby to handle peak power demands.

"There is no shortage of academic studies that envision a future of distributed generation and large-scale renewable deployment," Brownstein said. "What was unique about this dialogue was that it was leading experts in their field who very clearly understand the policy and the politics. We were in an academic setting but we were focused on a really tangible and difficult set of problems."

While the group did not discuss new pricing ideas in detail, several participants said an important piece of any plan is transparency of the different elements of benefits and costs. Tom Hoff, founder of Clean Power Research, a Napa, Calif., firm that invents software to optimize the use and administration of solar power, said companies such as his might benefit in the short term when regulators are conducting studies to understand complex pricing and incentive schemes. But "as a country, it's better if we just simplify these things and get moving," Hoff said.

In an afternoon session when the participants divided into small groups to discuss various implications of distributed energy, graduate students from Princeton and Columbia participated and reported the discussions to the larger group.

"It was interesting to see how complicated the business of selling electricity is and how many factors go into deciding whether business models are viable," said Mark Walker, a first-year Ph.D. student in Princeton's Woodrow Wilson School of Public and International Affairs. He added that it also was striking "how emerging technologies can drastically change the way we might see the grid operate in the future."

Jackie Wong, an MPA student in the Wilson School, said that as a staff member at the Department of Energy before coming to Princeton she participated in numerous meetings on energy and climate policy and was impressed by the caliber of people participating in the Princeton meeting.

"Sometimes in settings like these, people give what sound like canned responses," she said. "In this meeting, I felt there was a real dialogue. It's really cool to be exposed to a debate about something that is on the forefront of what people are thinking about. It makes me realize how much I still do not know and inspires me to learn more."

Bradford and Hoskins plan to use the meeting as a starting point for writing a "white paper" that lays out the issues and possible solutions. "Did we answer all the questions? Absolutely not," said Hoskins. "It was the start of a dialogue, but I think the dialogue will continue based on the ideas we heard today."