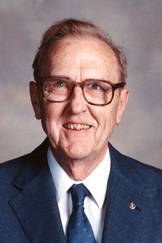 Norman Sollenberger, a professor emeritus who served as the chair of Princeton's Department of Civil Engineering from 1961 to 1971, died of heart failure Wednesday, April 8, at the University Medical Center at Princeton. He was 96.

Colleagues credited Sollenberger with attracting talented faculty and research funding to civil engineering during his tenure as chair and with significantly increasing the number of bachelor and doctoral degree students the department graduated.

"It was the genius of Norman Sollenberger to see clearly the future of civil engineering and quietly to go about preparing for it by making key new appointments and seeing to it that new types of research and teaching were begun," the late Robert F. Goheen, the president of the University from 1957 to 1972, once said of Sollenberger.

Sollenberger was a fine teacher who deeply cared for his students, according to colleagues. He once devoted many hours to ensuring a young civil engineering student from Hong Kong, a rarity in the 1950s, would graduate. That engineer, Gordon Y.S. Wu, went on to help found a major Hong Kong-based construction firm. When he returned to Princeton years later to announce a record-breaking $100 million gift to the University, the first person Wu asked to visit was Sollenberger.

"He mentored many other students as well as younger faculty," said civil engineering professor David Billington, a longtime colleague and friend of Sollenberger. "But he never claimed the credit that was truly his due."

Sollenberger was born in 1912 in Chapman, Kan., to Harry and Anna Sollenberger. As a boy, he worked summers for the local builder that employed his father as a foreman. He studied engineering at Kansas State University beginning in 1930, taking a year off to work as an assistant engineer in the construction of three steel bridges in Wabaunsee County. He received his bachelor's degree in 1935 and his master's degree a year later, and stayed on at the university to teach for a year. He then accepted a teaching position at Iowa State University, where he met Martha MacGoey, whom he married in 1939.

Sollenberger joined the faculty of Princeton in 1941. He left in 1945 to work for the Roebling Co. of Trenton, N.J., a maker of steel cables. During his six years at Roebling, he designed an innovative five-span cable truss bridge in El Salvador, where he lived for two years while supervising its construction.

He rejoined the Princeton engineering faculty in 1952 and was named chair of the civil engineering department nine years later. Under his guidance the department grew from graduating an average of six undergraduates per year to 18 and saw a fivefold increase in doctoral graduates and a steady growth in research funding.

The late Joseph Elgin, dean of the School of Engineering and Applied Science from 1954 to 1971, once said that Sollenberger gave civil engineering at Princeton a "needed redirection and in the process helped to strengthen the entire school." In his teaching, Sollenberger supervised student projects that included the building and testing of elegant concrete models of buildings and bridges that are still on display in the Engineering Quadrangle.

Upon Sollenberger's retirement in 1980, a group of faculty wrote scholarly papers that were dedicated to him and collected in a book, "Norman J. Sollenberger, An Educator's Educator."

"Each of the six professors expressed the debt they owed to him for redirecting their careers, for his leadership and for his personal friendship," said Billington, who contributed to the book. "In addition to design, teaching and service as a chairman, he had a unique quality of personality."

Elgin once said that Sollenberger "was always a gentleman in the sometimes neglected sense of the word. He had ideas well in advance of his time but he let them work slowly rather than trying to push."

While at Princeton, Sollenberger continued to design commercial structures and consult on others. His steel design for the New Jersey Pavilion at the 1964-65 New York World's Fair won the 1965 Architectural Award for Excellence given by the American Institute of Steel Construction.

His work on concrete structures led to a highly respected 1967 book that he co-wrote, "Modern Prestressed Concrete." In 1969 he was named the New Jersey Engineer of the Year by the New Jersey section of the American Society of Engineers and in 1978 he was elected president of that section. He also did pioneering research into the forces wind exerts on tall cooling towers used by power plants.

After his retirement from Princeton, Sollenberger continued to design and consult on large structures into his late eighties. His colleagues recalled his enthusiasm for engineering in his later years, which included climbing to the top of a 450-foot cooling tower and to the highest point on one tower of the Golden Gate Bridge.

His first wife died in 2001. He is survived by his second wife, Eleanor Sollenberger, whom he married in 2006. The family requests that contributions in his memory be directed to the Meadow Lakes Scholarship Fund, Meadow Lakes, 300 Etra Road, Hightstown, NJ 08520. The date for a memorial service has not yet been announced.