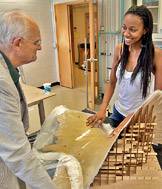 "Félix Candela: Engineer, Builder, Structural Artist," an exhibition opening Oct. 11 at the Princeton University Art Museum, features scale models of Candela's masterworks created by Princeton engineering students. One of his most dramatic works, the Chapel Lomas de Cuernavaca, was recreated by junior Cecily King (right). She discussed her project here with David Billington, who led the project with his colleague in the Department of Civil and Environmental Engineering, Maria Garlock. Photo: J. Wayman Williams Jr.

At first glance, engineer Félix Candela's creations seem more like sculptures than buildings. Composed of thin sheets of pale concrete, the vaulted ceilings and scalloped roof lines evoke the delicate curves of sun-bleached seashells -- not the sturdiness of steel-and-concrete slabs.

Yet sturdy they are. They're so sound, in fact, that a group of students led by Maria Garlock, an assistant professor of civil and environmental engineering at Princeton, has spent the past three summers building models and studying how the Spanish-born Candela blended art and engineering.

"Candela created buildings that were quite dramatic," said Professor David Billington, who led the project with Garlock. "He was trained as an architect, but became one of the great engineers of the 20th century. He was one of the giants of thin-shelled concrete structures."

The project culminates on Saturday, Oct. 11, with the opening of "Félix Candela: Engineer, Builder, Structural Artist," an exhibition at the Princeton University Art Museum, where scale models of Candela's masterworks from Mexico will be displayed.

Opening day of the exhibition will coincide with the release of a new book on Candela's work, written by Garlock and Billington, which features photos drawn from Candela's personal archive and chapters cowritten by students. The authors also will host a symposium that will explore Candela's influence on the field of structural engineering and his distinction as a "structural artist."

Candela (1910-1997) studied architecture at the Madrid School of Architecture. Finding himself on the losing side in the Spanish Civil War, he moved in the late 1930s to Mexico, where he initially worked as an architect before opening his own construction company.

Beginning in the late 1940s, he began focusing on thin-shelled concrete structures, a technology pioneered in the 1920s and 1930s by other Europeans, notably two Germans, Ulrich Finsterwalder and Franz Dischinger. 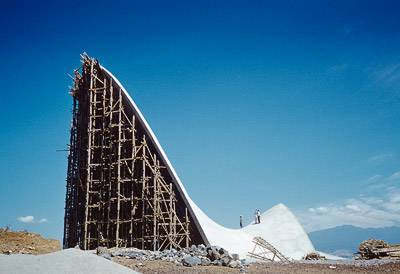 Candela taught himself the complex mathematics and engineering principles used by the Germans to build the shells correctly. The equations are analogous to those Albert Einstein used to describe relativity, Billington said, in that thin-shell engineers work in multiple dimensions, translating the two dimensions of a sheet of concrete into a three-dimensional space.

The thin-shell structures allow roofs to be built without interior columns or exterior buttresses. Though the concrete may be less than two inches thick, if designed carefully, the curvature and weight of the sheet stiffens the structure, allowing it to support itself and additional loads. The results are buildings that seem to defy gravity, like giant swaths of fabric blown aloft by a soundless wind.

While many engineers got bogged down in the complex mathematics of the thin shells, Candela worked out practical ways to turn his concepts into reality, said Billington, the Gordon Y.S. Wu Professor of Engineering. "He was a builder, which demanded the disciplines of efficiency and economy. He didn't want to waste materials or money."

During the 1950s and 1960s, Candela built hundreds of thin-shell structures near Mexico City. Many used his stock-in-trade "umbrella" form, simple concrete structures that resembled an umbrella blown upward and that served as shelters from sun and rain.

His most dramatic buildings include the Los Manantiales Restaurant, a round building with repeating arches that resembles a giant clam shell, and the Chapel Lomas de Cuernavaca, a church with a parabola-shaped spire that thrusts triumphantly toward heaven. His buildings still stand in excellent shape today, despite several earthquakes that have struck the region.

Billington, whose academic expertise centers in part on engineers who have brought aesthetic sensibilities to their work, said Candela's combination of solid engineering and artful design are all too rare. "We are fighting all kinds of stereotypes," he said. "Usually, engineers are taught to calculate and think in straight engineering terms. But that's not the way Candela thought. He used to say he would work on a form until all of the ugliness disappeared."

The upcoming exhibition marks the second recent collaboration between the School of Engineering and Applied Science and the University's art museum to spotlight the work of structural artists. In 2003, the museum hosted "The Art of Structural Design: A Swiss Legacy," which featured student-built models of bridges and buildings by influential Swiss engineers Robert Maillart, Othmar Ammann, Heinz Isler and Christian Menn.

Billington said the in-depth study of Candela's work was long overdue, but what was needed was a smart structural engineer who also was fluent in Spanish, since many of Candela's personal documents were written in that language. Garlock, a native of Argentina, was the ideal scholar to lead the project.

"When I was a child," Garlock said, "I used to see tall buildings and long-span bridges and wonder how someone could make a building so tall or a bridge so long. When I was introduced to Candela's work, it was the same feeling. How can he make something so thin and yet span so far? His buildings are so beautiful."

Garlock said that in addition to learning the engineering and artistic principles behind the concrete shells, the project gave students a chance to learn about Candela as a person and about the time and place in which he worked.

To produce the book and models, the Princeton group combed through photos, books and other documents in Candela's personal archive, which Candela's widow, Dorothy, who lives in Raleigh, N.C., made available to them.

"He became very human," said Garlock. "He used to be this name, a great engineer, but we learned that at first he was very unsure of himself. He gained confidence as he went, but still remained humble."

The research also explored how Candela maneuvered in the society in which he worked. Garlock noted, for instance, that Candela got contracts to build his simple concrete umbrellas because the Mexican government required that all open-air markets have some kind of roof over them. His revolutionary technique for constructing the shells on top of a temporary wooden scaffold allowed him to build the structures inexpensively.

"He was able to create his more magnificent structures with the money he made from those bread-and-butter projects," she said. "The research puts his work in that Mexican context and shows that the economy, social conditions and politics all played a role."

Students working on the project were each given one of Candela's major works to analyze and model over the past two summers, under the supervision of Joe Vocaturo, the lab manager for the civil and environmental engineering department. 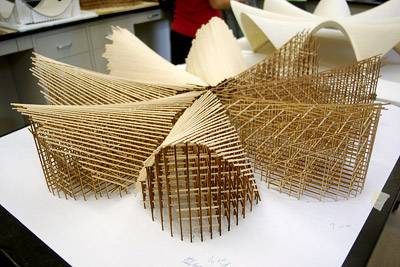 Senior Sylvester Black, who built this model, employed the construction method that resembled the way Candela built his structures, meticulously laying narrow strips of wood across a wooden scaffold and then using epoxy to bind the wood strips together. When the epoxy dried he removed the scaffolding, just as Candela used to dismantle his full-size scaffolds to leave behind freestanding concrete vaults. (Photo: J. Wayman Williams Jr.)

Some of the replicas were created using a 3-D printer that generated plaster forms from computer-based designs. In the case of Chapel Lomas de Cuernavaca, however, the construction method more closely resembled the way Candela built his structures.

Cecily King, a junior in civil and environmental engineering, meticulously laid narrow strips of wood across a wooden scaffold and then used epoxy to bind the wood strips together. When the epoxy dried she removed the scaffolding, just as Candela used to dismantle his full-size scaffolds to leave behind freestanding concrete vaults.

"I definitely will try to bring a sense of aesthetics to my work," King said of her own career goals as an engineer. "I feel like it's important that structures appeal the public."

Kieran Kelly-Sneed, a civil and environmental engineering graduate student who also worked on the project, said he admired how Candela merged architecture and engineering into single forms. "The form expresses the logical structure," he said. "To me, that's elegant."

The symposium on Candela's work and influence is scheduled for 9 a.m. to 5 p.m. Oct. 11 in the Stewart Film Theater, 185 Nassau St. More information on the symposium is available on the Department of Civil and Environmental Engineering website. More information on the gallery exhibition, which will run until Feb. 22, is available on the art museum website.