A storm nears the coast, stirring up wind and waves. Along the boardwalk that lines the beach, a row of oversize concrete umbrellas begins to tilt downward, transforming from a convenient canopy to a shield against the coming onslaught.

In a new approach to storm surge protection, a Princeton team has created a preliminary design for these dual-purpose kinetic umbrellas. In a study published Mar. 28 in the Journal of Structural Engineering, the researchers used computational modeling to begin evaluating the umbrellas’ ability to withstand an acute storm surge. 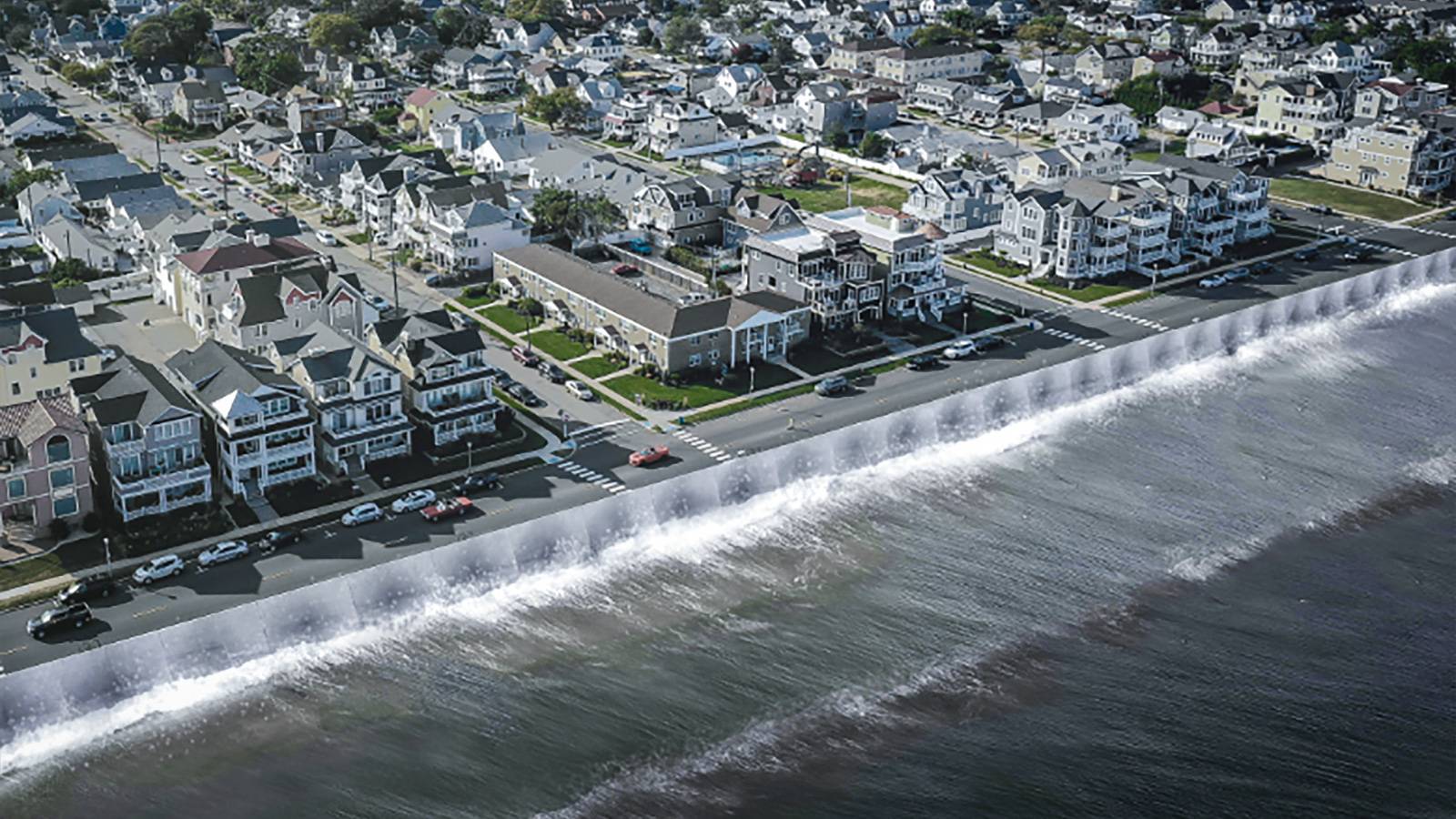 In a new approach to storm surge protection, a Princeton team created a preliminary design for dual-purpose kinetic umbrellas that would provide shade during fair weather and could be tilted in advance of a storm to form a flood barrier. This artistic rendering shows how a row of umbrellas could be deployed to protect a coastal community.

As sea levels rise and storms grow stronger, coastal communities are building more seawalls to help protect people and property from extreme flooding. These barriers can be unattractive and restrict access to beaches, but the Princeton team’s umbrellas would provide shade during fair weather and could be tilted in advance of a storm to form a flood barrier.

“This is so much more than just your typical coastal defensive structure,” said lead study author Shengzhe Wang, a Ph.D. student in civil and environmental engineering. “It’s the first time that anyone has really tried to integrate architecture as an inherent component to a coastal countermeasure.”

The proposed umbrellas are shells of reinforced concrete about 4 inches thick, built in the shape of a hyperbolic paraboloid (shortened to hypar), a saddle-like structure that curves inward along one axis and outward along the other. The structure takes inspiration from the work of the Spanish-born architect Félix Candela, who designed hundreds of buildings with thin-shelled hypar roofs in Mexico in the 1950s and 1960s.

Study co-author Maria Garlock, a professor of civil and environmental engineering, has long studied Candela’s designs; she co-wrote a book on Candela and helped create an archive and exhibition exploring his work. In the fall of 2017, she and co-author Branko Glišić, an associate professor of civil and environmental engineering, were considering a project to study the potential of hypar umbrellas as “smart” structures to capture energy and rainwater. Then, a new idea came to her: In addition to adding sensors, “why not tip them and use them in a completely different way — as a kind of seawall?” she asked.

Garlock and Glišić obtained funding from Project X, which enables engineering faculty members to pursue unconventional ideas. Wang took on the task of testing whether the umbrellas would be a viable strategy for coastal protection.

Wang analyzed the geometry and structural strength of the proposed umbrellas, thin shells of concrete measuring 8 meters (about 26 feet) on each side and supported by 10-foot-tall, 20-inch-square columns. In these simulations, he also tested the functionality of a hinge at the vertex where the column meets the middle of the umbrella. 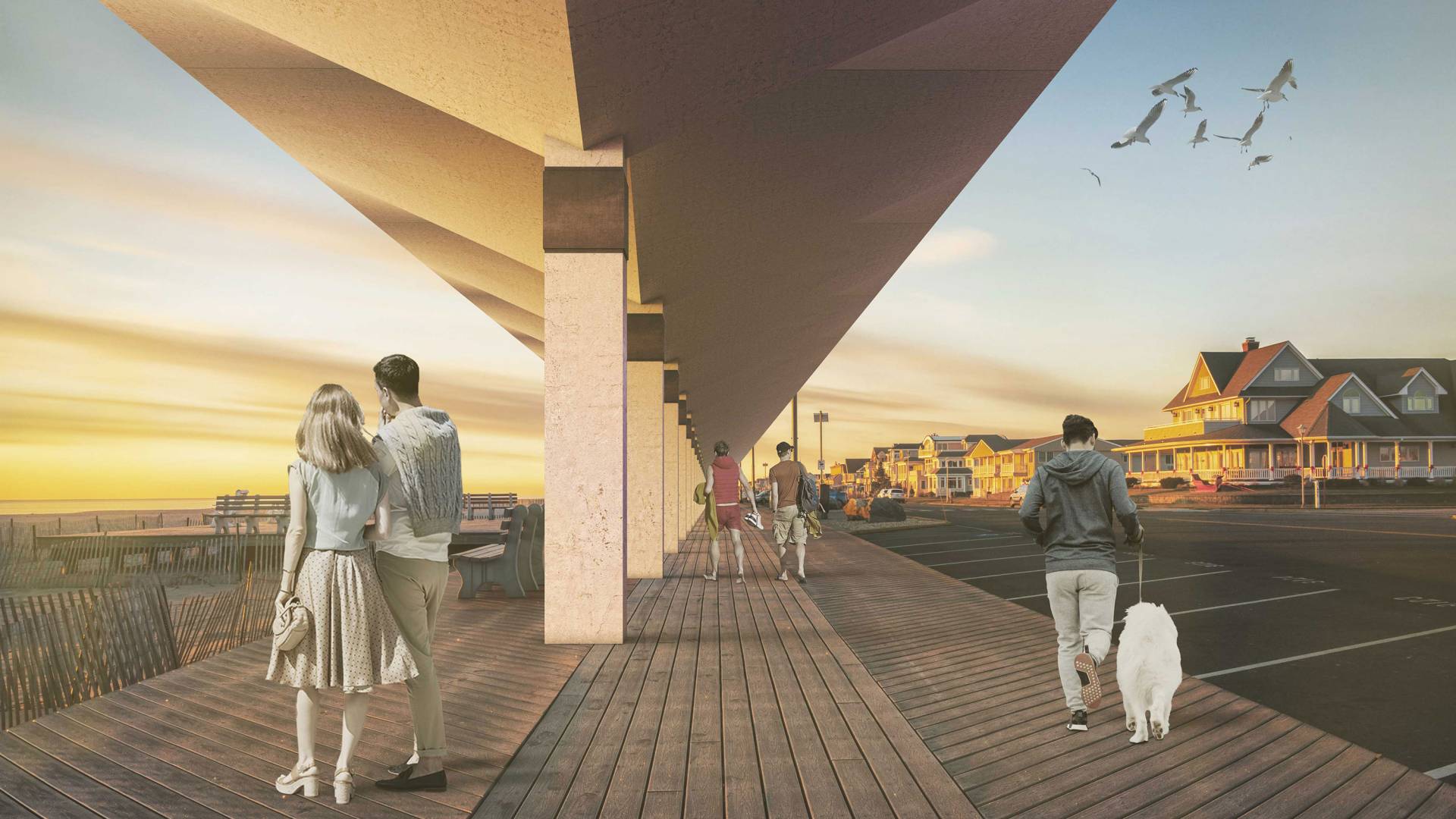 In sunny weather, a row of oversize concrete umbrellas would form a canopy for pedestrians along the beach.

To investigate how the umbrellas might fare during a coastal storm surge, the team compiled storm surge data from hurricanes between 1899 and 2012 along the U.S. East Coast, then modeled a storm surge height of 18 feet, encompassing all but the highest storm surge in the data set. Adapting established numerical methods for modeling fluid-structure interactions to study hypar structures, they showed that the umbrellas would remain stable when faced with a wall of water about 75% of their deployed height

“These shells are so thin that anyone looking at this would not be inclined to believe that these structures would be capable of stopping such large forces from water,” said Wang. “But we're able to take advantage of the geometry of the hypar shape that gives the structure the additional strength that’s required.”

Wang has now built physical models of the umbrellas (measuring about 6 inches across) to validate the results of the numerical approach, and is beginning to test the models’ responses to the dynamic forces of turbulent flows inside a 10-foot-long water channel. Wind forces characteristic of landfalling hurricanes will also be captured via wind tunnel testing.

Wang noted that most previous studies have evaluated the ability of vertical walls or slanted barriers to withstand storms, but the hypar’s complex geometry required the team “to come up with a whole new set of rules that govern how the structure will perform.” Due to the complexity of the solution, another graduate student, Vanessa Notario, will study the flow of forces in the shell as a part of her M.S.E. thesis. 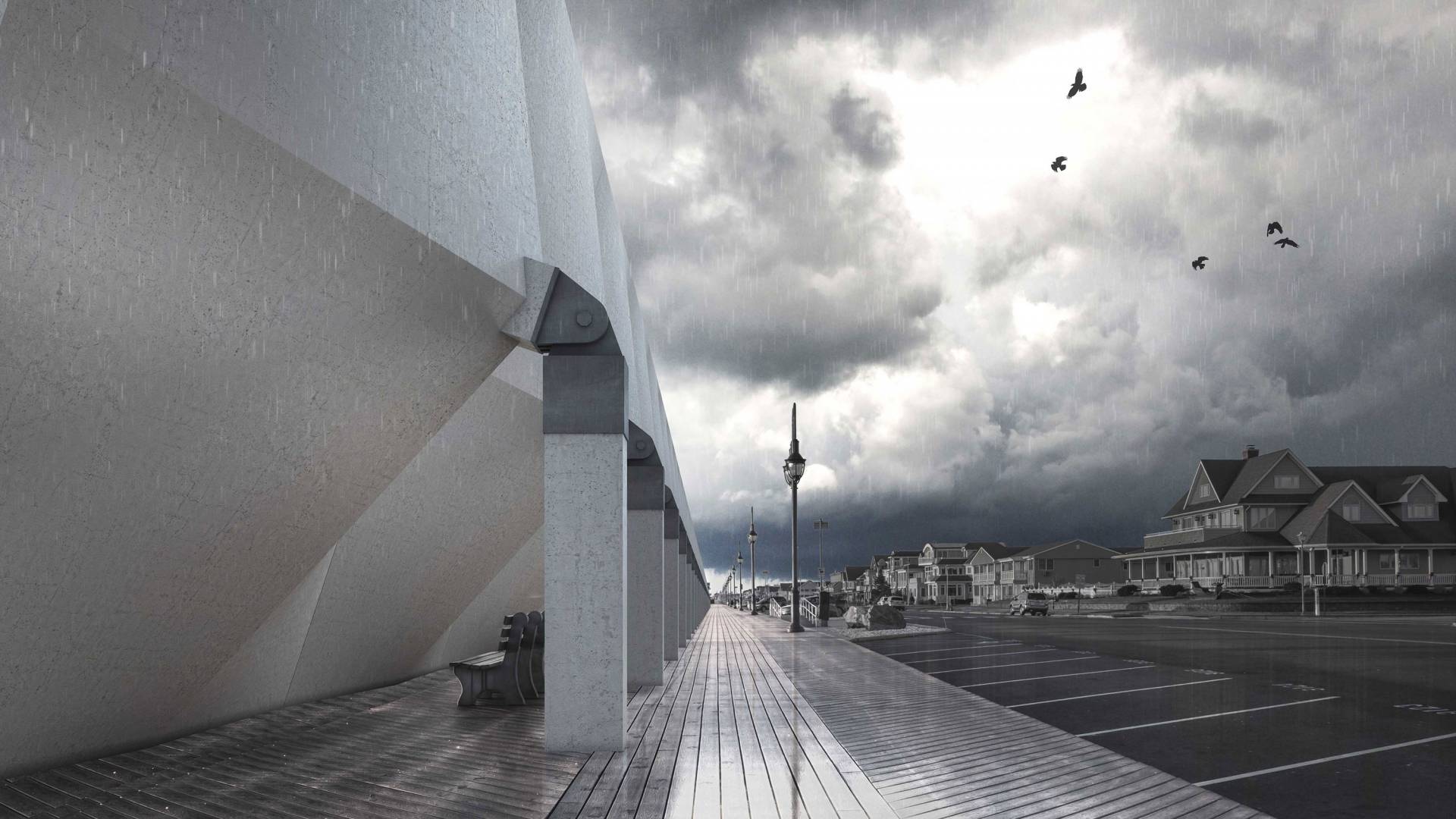 The researchers calculated that the proposed umbrellas would remain stable when faced with a wall of water about 75% of their deployed height of 26 feet.

In addition to optimizing the structures to resist high winds and waves, designs for coastal protection must take other practical considerations into account. The 10-foot height of the columns, Garlock said, is good for shading pedestrians while restricting access to the umbrellas’ hinges and preventing vandalism.

The team plans to investigate the potential of using more sustainable materials, as well as adding sensors and actuators to control the umbrellas, and incorporating systems for capturing solar energy and storm water.

“Sensors would verify that umbrellas are performing properly before, during and after deployment, while actuators would enable not only automatic deployment but also tracking the sun and wind for the best power and storm water harvesting purposes,” said Glišić, who has expertise in structural health monitoring and smart structures.

“This is a completely new way of thinking about coastal defense structures,” said Garlock. “Moving forward, our goal is to make these umbrellas part of a smart, sustainable community.”

To help integrate the new design into holistic plans for coastal resilience, the researchers will collaborate with Ning Lin, an associate professor of civil and environmental engineering at Princeton whose team recently produced updated 21st-century flood maps for the U.S. Atlantic and Gulf Coasts. They also have plans to work with a geotechnical engineer and are consulting with the New York City Mayor’s Office of Resiliency.

In addition to the Project X innovation fund, this work was supported in part by Princeton University’s Metropolis Project.