Below left: An exhibition of photographs taken by Yin Lu “Julie” Young and her colleagues during their field visits to the Mississippi coast following Hurricane Katrina will be on view at the EQuad Café through Friday, May 11. This shot shows a stack of delicate unchipped china in the foreground that survived the storm unharmed, while all that remains of the church where it was used is a bent steel frame in the background.

Two of the world’s worst natural disasters in recent years stemmed from different causes on opposite sides of the globe, but actually had much in common, according to Yin Lu “Julie” Young.

Young, an assistant professor of civil and environmental engineering, is part of a large National Science Foundation-funded research initiative that has been studying both the Indian Ocean Tsunami of 2004 and the United States’ Hurricane Katrina of 2005.

One of the research team’s surprising conclusions: when it comes to the damage they wreak, hurricanes and tsunamis can bring surprisingly similar forces to bear.

“A lot of the hurricane damage along the Mississippi coastline came from storm surges -- not from high winds or levee flooding that occurred in the New Orleans area,” said Young. “Storm surges result in very different mechanisms. When it comes to forces on a structure, what happens in a storm surge is very similar to what happens in a tsunami.”

During a storm surge, structures that were built to withstand the downward force of gravity now must cope with a totally different force: the upward and lateral push of water. In addition, buildings have to withstand assaults from debris caught up in the surge.

“Eighteen-wheeler containers, freed floating barges and boats can all become projectiles that will strike objects in their path,” said Young. “Large debris may also become lodged between structural elements like columns and lead to complete collapse of the structures.”

Young’s collaborators are Ronald Riggs and Ian Robertson, professors at the University of Hawaii-Manoa, and Solomon Yim, a professor at Oregon State University. The team members have just published a study of their work in the Journal of Waterway, Port, Coastal and Ocean Engineering.

During their two field visits, the team took more than 2,000 photographs of the destruction to the Mississippi coast. An exhibition of photographs culled from that collection opens during a reception from 4 to 5 p.m. Wednesday, April 11, in the EQuad Café. The photographs will be on view through Friday, May 11. 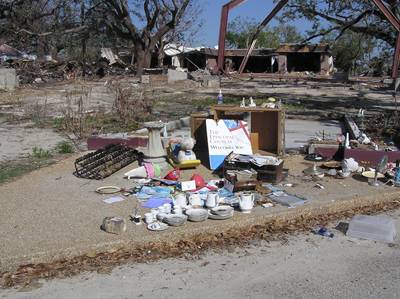 One of Young’s favorites is a photograph of a stack of delicate unchipped china that survived the storm completely unharmed. All that remains of the church where the china was used is a bent steel frame. “You have to appreciate the irony of nature,” Young said. “Most of the time, the scenery is tragic, ironic and beautiful all at the same time.”

One of the group’s interesting research findings from the Mississippi work has to do with a phenomenon better known for occurring in neither hurricanes nor tsunamis but, rather, earthquakes. That is something known as “liquefaction.” As the storm surge recedes, the sudden decrease in downward pressure on the saturated soil causes the sand to liquefy and to flow out as a heavy slurry. This can lead to the eventual collapse of buildings, highways or bridge abutments, as well as the emergence of gigantic potholes along coastal roads.

The group prepared a report for the Federal Emergency Management Agency proposing building code changes. “If you consider the gravitation, wind, seismic and wave forces, as well as the surrounding soil composition, a building can be designed such that it should be available for immediate occupancy after a minor event, and be able to remain structurally intact to allow for safe evacuation during a Category 3 hurricane like Katrina,” said Young.

Understanding how to construct hurricane-resistant buildings is one thing; getting society to implement that knowledge is quite another, Young said. “Politics and human values come into play,” she said. “People are resilient and have short memories and think that if another hurricane comes along they can just rebuild. I admire their strength but at the same time there is a certain stubbornness about not learning from past mistakes. People like to do what they did before because it’s easier than fixing the root of the problem.”

In the past weeks Young has given presentations on her research at the Massachusetts Institute of Technology, the California Institute of Technology and the U.S. Naval Academy.  “We hope to present our findings widely so that engineers can learn from this and modify future design codes to minimize damage,” she said.