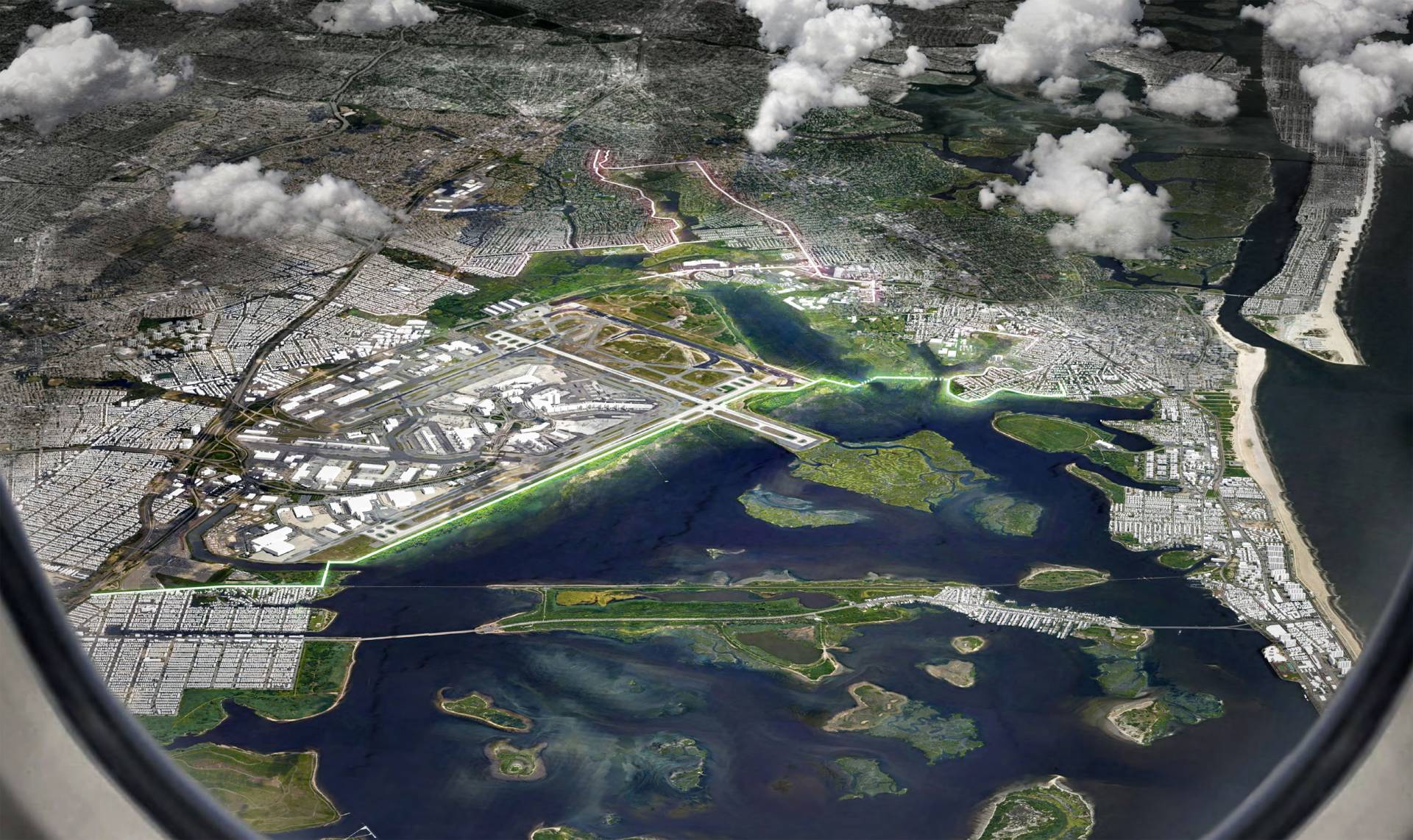 A team of Princeton architects, engineers and scientists led an effort to plan solutions that could protect a critical part of New York City from rising seas and intensifying storms. This composite aerial image shows Jamaica Bay, an area that includes John F. Kennedy International Airport and the neighborhoods behind it.

As a microcosm of the challenges facing coastal cities around the world, New York’s Jamaica Bay pretty much has it all.

Home to about 3 million people, one of the world's busiest airports and sensitive coastal ecosystems, Jamaica Bay is a lagoon bordered by Brooklyn and Queens at the southwestern edge of Long Island. This region is vulnerable to an evolving set of threats, including sea-level rise, increasingly intense storms and shifting rainfall patterns.

This complexity makes it a perfect place to apply the cross-disciplinary approach that a team of Princeton researchers is bringing to improving the resilience of New York and other coastal cities. Culminating years of research funded by the National Science Foundation and supported by the Princeton Environmental Institute, the Princeton team recently published a 170-page report that details existing conditions, analyzes climate and sea-level trends, and proposes solutions to protect Jamaica Bay's neighborhoods, infrastructure and ecology. The work is a continuation of the Structures of Coastal Resilience initiative, which was funded by the Rockefeller Foundation and supported by the Andlinger Center for Energy and the Environment.

"We are exploring ways to build resilience that is multilayered and multifaceted," said Guy Nordenson, professor of architecture and affiliated member of the Department of Civil and Environmental Engineering. Along with Nordenson, principal collaborators at Princeton include Ning Lin, associate professor of civil and environmental engineering, and Michael Oppenheimer, the Albert G. Milbank Professor of Geosciences and International Affairs and the Princeton Environmental Institute.

In the Jamaica Bay report, the authors propose a two-tiered set of storm barriers: an outer 6.7-mile barrier linking high ground to the north and south of the bay could be closed to protect John F. Kennedy International Airport and other critical areas against extreme events; while a lower, more inland barrier would provide passive protection against tidal flooding as sea levels rise, yet preserve the ecology of the marshes. 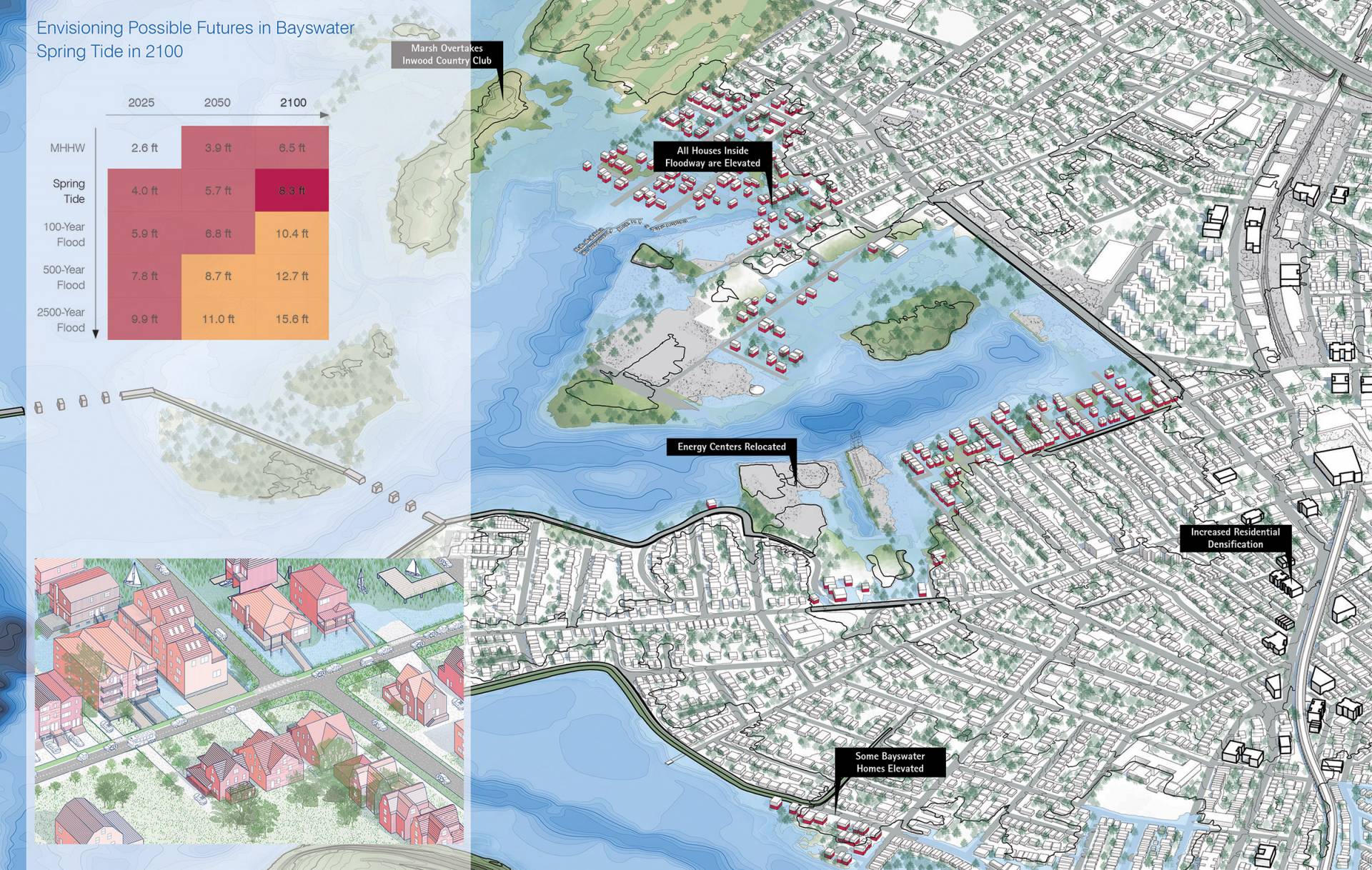 The planning arose from a collaboration of architects, engineers and climate scientists. Thus it was able to account for a range of storm scenarios and timescales as well as the unique topography, ecosystem, communities and infrastructure of the region.

The work is part of a larger effort in New York and beyond. Lin, Nordenson and Oppenheimer are longstanding members of the New York City Panel on Climate Change (NPCC), a group established by the city in 2008 that released its fourth major study in March 2019. By studying and applying solutions in New York, the Princeton team seeks to build a broader methodology for protecting coastal cities.

A key element of the work is combining state-of-the-art climate projections with the particular practical questions that affect cities. Lin said that city officials need details about rainfall, storm surge, sea level and wind, not just large-scale features such as air and sea temperatures.

"There is a gap between the decision-making and the large-scale climate protections," said Lin. While broad climate projections are critical, she said, regional officials are dealing with more immediate problems. "You are going to make a decision for this building, this dam, this community."

One component of the group’s proposed solutions is a storm surge barrier that would operate during more intense, less frequent storms. During temperate weather, the barrier could provide a public space for recreation.

In a talk at an NPCC conference in March, Oppenheimer said the practical work of analyzing hazards and solutions for New York has informed his work as a contributing author to reports for the Intergovernmental Panel on Climate Change, the lead international organization assessing climate change. He cited recent studies, supported by the NPCC, on worst-case scenarios about melting of the Antarctic Ice Sheet and the impact on sea-level rise for cities such as New York. The work is an example of collaborations that "grow from the local to the global, as well as from the global down to the local," he said.

"NPCC provides an example to the rest of the world for how localities can approach the analysis of problems characterized by substantial uncertainty, yet deliver science that is ready to be used by policymakers," Oppenheimer said, noting that New York already has made intelligent use of the work. Oppenheimer is the U.S. representative on the international team working on a report on Sea-Level Rise and Implications for Low-Lying Islands, Coasts and Communities as part of the IPCC’s Special Report on the Ocean and Cryosphere in a Changing Climate (SROCC) due to be launched Sept. 25.

"The NPCC’s science, including the Princeton team’s integrative work spanning engineering and architecture, has informed everything from our updated building and zoning codes to the design of our large-scale coastal protection projects," said Jainey Bavishi, director of the New York City Mayor's Office of Recovery and Resiliency.

In addition to Nordenson, Lin and Oppenheimer, the authors of the Jamaica Bay report include Professor of Architecture Paul Lewis, graduate alumna Rennie Jones, former research scholar Reza Marsooli and Catherine Seavitt of the City College of New York. Undergraduates Yolanda Jin, Class of 2020, and Reuben Zeiset, Class of 2019, also contributed as part of summer internships.

Nordenson said the work includes several broadly useful principles: designing for a range of scenarios, from minor to severe; using world-class science to project how those scenarios are likely to change over decades; integrating multiple layers of solutions, such as a combination of wetlands, barrier islands, seawalls, levies and dunes; and developing accurate maps of current and future flood risks.

This combined perspective leads to greater creativity and effectiveness, he said.  "We can put ideas out there that are bolder than what government folks can put out themselves and that start to pull people in a different direction."

The work was funded by the PEI Climate and Energy Grand Challenge project Natural Infrastructure for Flood Mitigation in a Changing Climate as well as by the Woodrow Wilson School’s Center for Policy Research on Energy and the Environment.