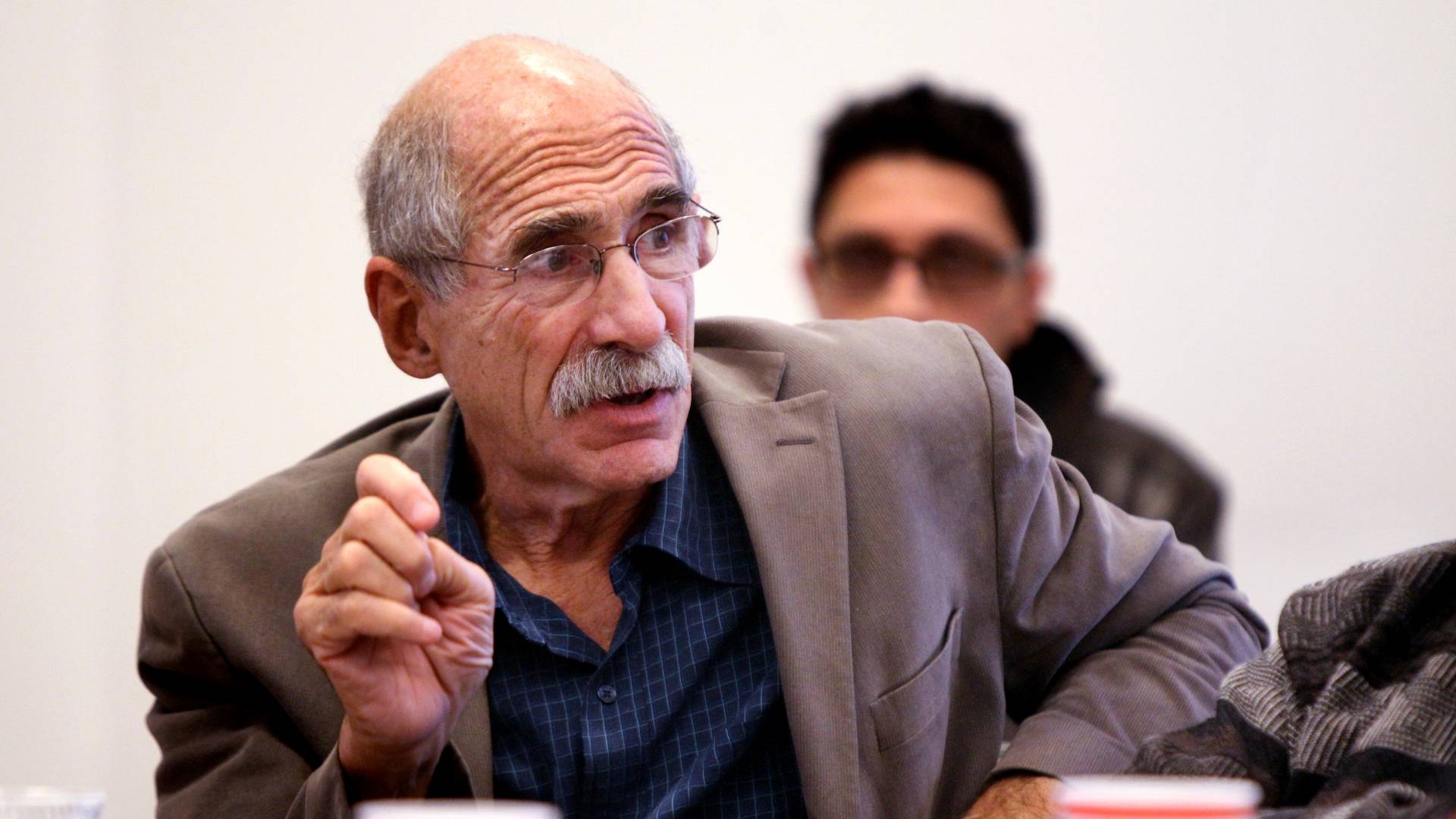 With temperatures rising in cities and vital infrastructure under threat from increasingly powerful storms and surging sea levels, governments, industry and other organizations must quickly adapt to the ever-growing changes wrought by climate change.

To tackle these issues head-on, Princeton University hosted a day-long workshop on climate adaptation that drew 37 academics, researchers, architects, economists and industry consultants to the Andlinger Center for Energy and the Environment.

"To an extent some might feel that thinking of climate adaptation is giving in too easily," said Guy Nordenson, Princeton architecture professor and organizer of the Oct. 27 event, "that if you start thinking about adaptation, you take energy away from greenhouse gas mitigation and other necessary preventive measures. But the fact is that with whatever mitigation measures are put in place, there is a realization that they will take time and the global warming already occurring has to be adapted to."

At the conference, presenters shared the latest research on climate change's global impact, such as tropical cyclones, heat waves in cities and melting polar ice caps. Speakers also presented ideas on adapting infrastructure for present and future dangers for coastal regions to cities and other communities, and brainstormed how Princeton can amplify its existing resources on campus to better serve stakeholders and students. The diverse group of participants came from academic institutions, such as The City College of New York and the University of Oxford. Experts from the World Bank, think tanks, insurance and finance also were present.

"Our work has come about because something bad happened," said Michael Oppenheimer, the Albert G. Milbank Professor of Geosciences and International Affairs and the Princeton Environmental Institute.

"There is now an automatic receptivity for technical advice. There is a lot of sudden personal engagement by people who lived through Hurricane Sandy and who want to do something for next time," said Oppenheimer, who is also director of the Program in Science Technology and Environmental Policy (STEP) at the Woodrow Wilson School of Public and International Affairs. 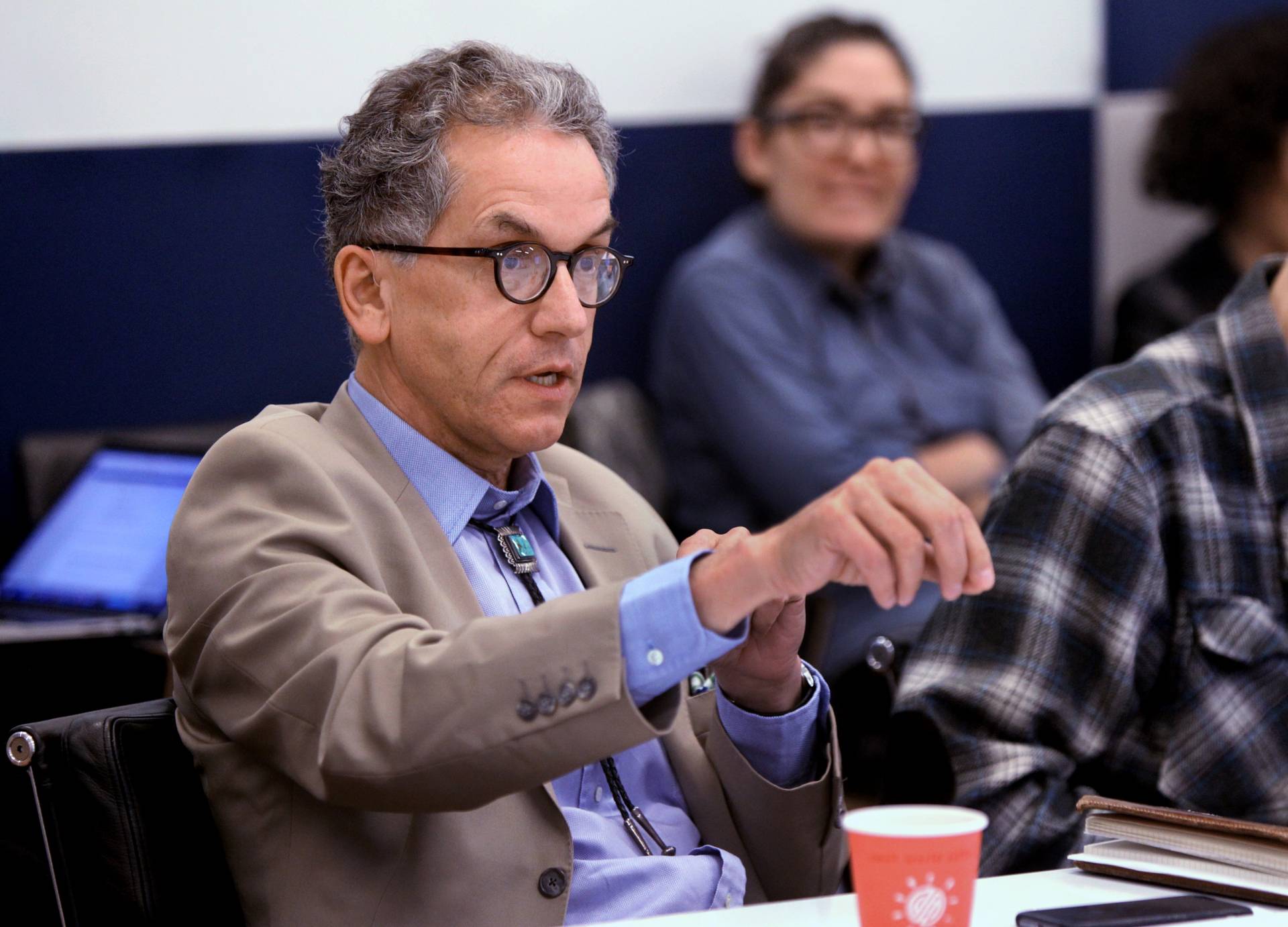 Professor Guy Nordenson, who organized the workshop, presents his research on designing infrastructure to protect against climate change and the need for Princeton to more effectively marshal climate adaptation resources on campus.

For almost a dozen years, Oppenheimer has been working on climate adaptation research as a climate change expert with Nordenson and Ning Lin, an assistant professor of civil and environmental engineering who is an expert on hurricane hazards and presented at the conference.

During the workshop, Nordenson spoke about one such recent collaborative project, Structures of Coastal Resilience, where the team developed designs for hurricane protection and climate adaptation in four locations: Atlantic City, New Jersey; Jamaica Bay, New York City;  Narragansett Bay, Rhode Island; and Norfolk, Virginia. The work by a range of researchers and architects was undertaken with the goal of making recommendations to the U.S. Army Corps. of Engineers.

During the gathering, attendees also presented and discussed topics such as climate-informed urban planning, the challenge of designing infrastructure with economic and political constraints, and water security.

For the New York metro region, Oppenheimer discussed a proposed massive engineering project of placing a huge storm barrier across the East River and another one that links Sandy Hook in New Jersey to the Rockaways in New York. This idea was proposed by the New York New Jersey Metropolitan Storm Surge Working Group, made up of scientists, engineers, architects and local leaders.

In one presentation, Rennie Jones, a research specialist at the School of Architecture, and Reza Marsooli, a research scholar in civil and environmental engineering, combined natural storm barriers made of oyster beds, reeds and other landscape features with man-made structures, such as sea walls and levies, for the vulnerable Jamaica Bay area. 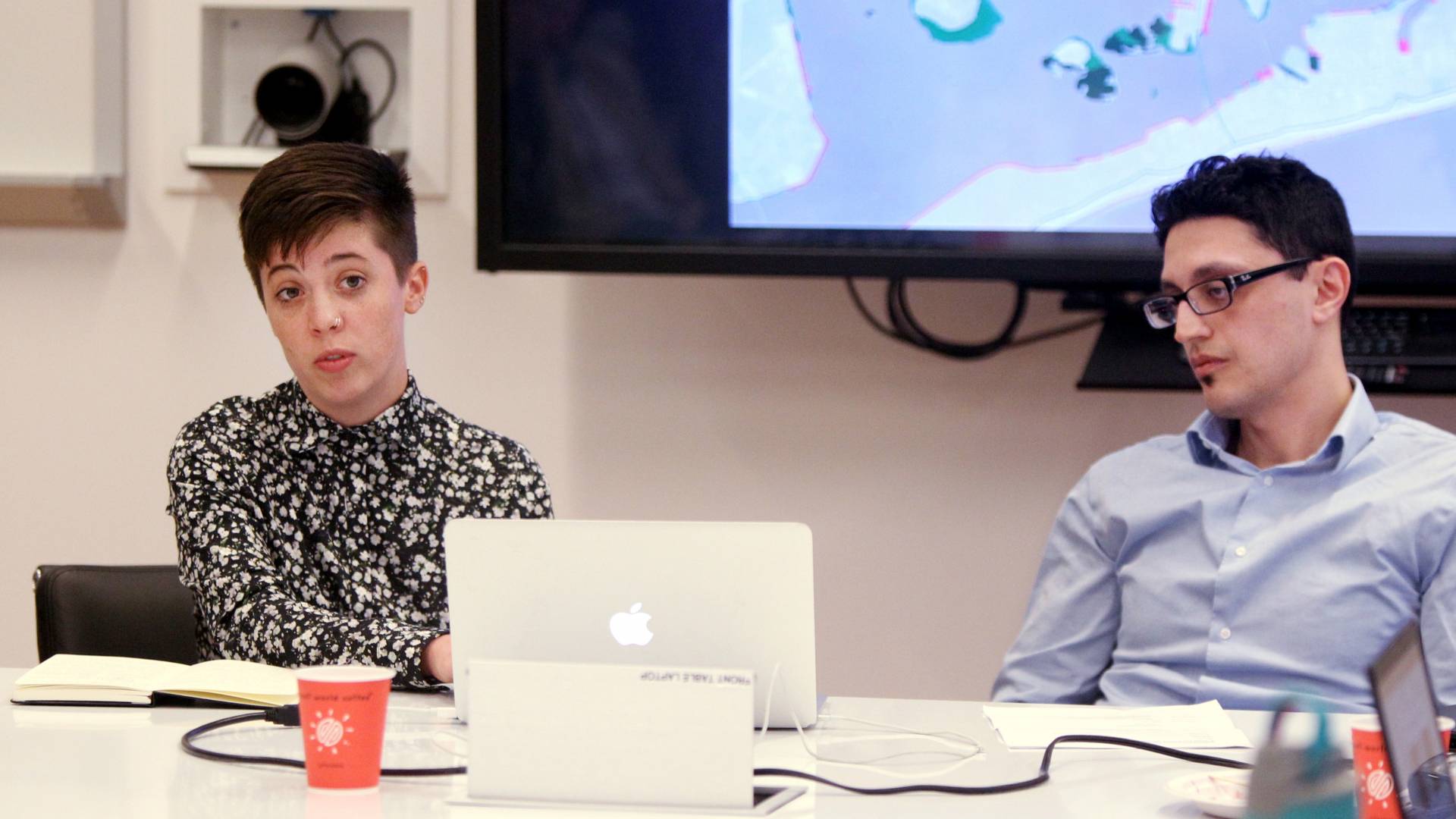 From left to right: Rennie Jones, a research specialist at the School of Architecture, and Reza Marsooli, a research scholar in civil and environmental engineering, discuss their climate adaptation research that combines natural storm barriers made of oyster beds, reeds and other landscape features with man-made structures, such as sea walls and levies, for the vulnerable Jamaica Bay, New York, area.

During the latter part of the afternoon, the workshop broke into three groups to examine how Princeton could marshal faculty, courses and climate adaptation research happening right now on campus and increase their effectiveness.

Forrest Meggers, an assistant professor of architecture and the Andlinger Center for Energy and the Environment, said the word "holistic" should sum up any education-related programs on climate adaptation. In their research, students would not only bridge different scientific and technical disciplines, but they would also have to consider the philosophical, ethical and political implications of their work, he said. Often, students will be dealing with stakeholders with competing goals, such as residents in different neighborhoods debating where a levy wall should be placed.

Yueh-Lin (Lynn) Loo, director of the Andlinger Center, said bringing together a diverse group of stakeholders for a climate adaptation project can be challenging unless researchers figure out each group’s motivation to participate effectively at the inception of the project.

“Incentives can be very different with such a diverse group of constituents," said Loo, the Theodora D. '78 and William H. Walton III '74 Professor in Engineering and professor of chemical and biological engineering. "You must figure out how to properly incentivize these multiple constituents in order to set the project up for maximum success.”

Any research on climate adaptation should also be driven by questions from stakeholders from the start, said Elke Weber, the Gerhard R. Andlinger Professor in Energy and the Environment and the associate director for education at the Andlinger Center.

"We need to provide motivation for the interdisciplinarity of the work from day one on the research," said Weber, also a professor of psychology and public affairs, Woodrow Wilson School. "One way to do that is to have a concrete problem that only researchers from a range of different disciplines can tackle and solve."