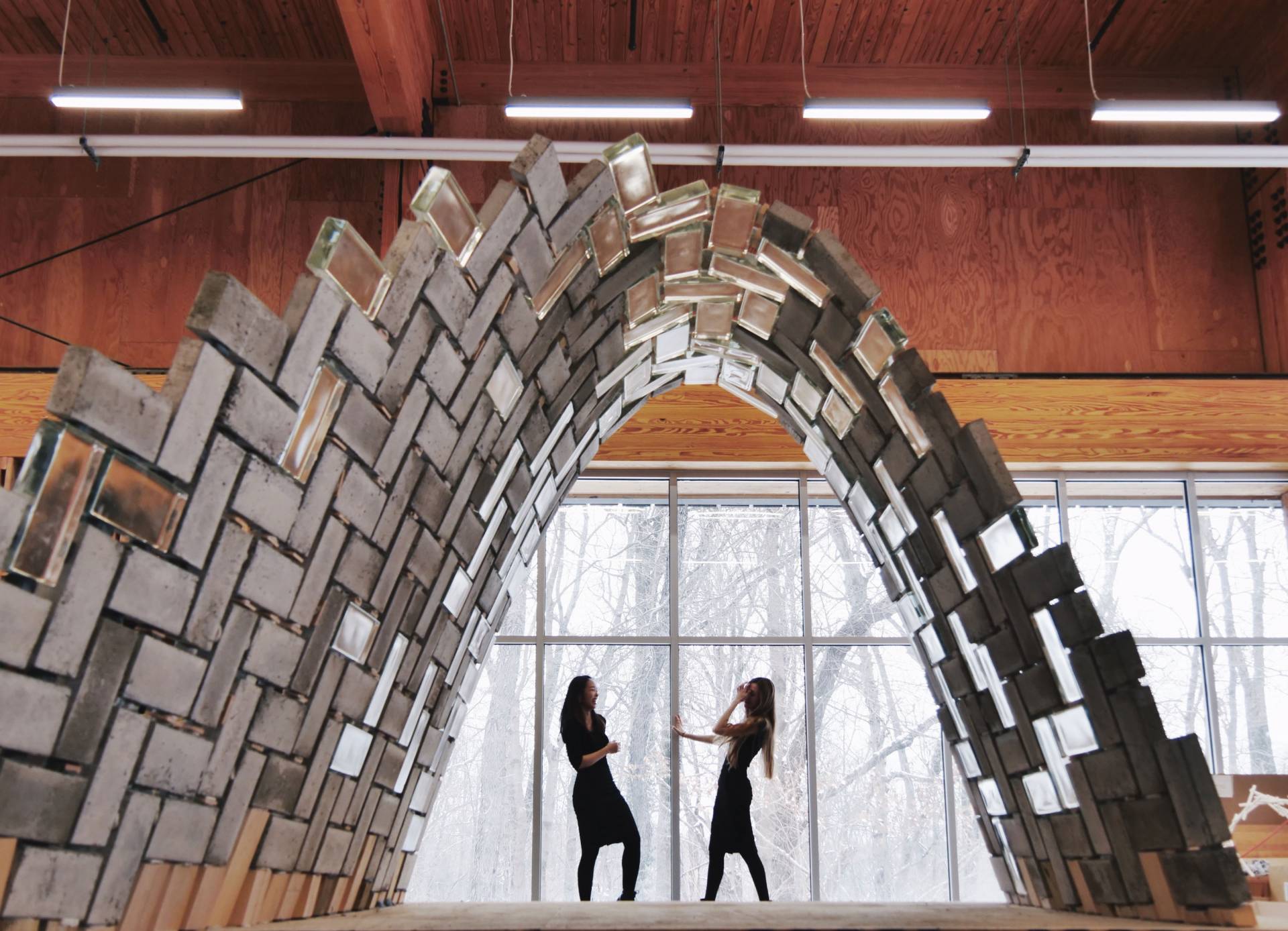 “We want to use robots to build beautiful architecture more sustainably,” said Adriaenssens, an associate professor of civil and environmental engineering and the director of the Form Finding Lab.

So the professors partnered with architecture and engineering firm Skidmore, Owings and Merrill (SOM) to create a striking and unique installation for the SOM exhibition “Anatomy of Structure” in London last March. They used two industrial robots provided by U.K.-based Global Robots to build a breathtaking vault, 7 feet tall, 12 feet across and 21 feet long, constructed of 338 transparent glass bricks from Poesia Glass Studio. 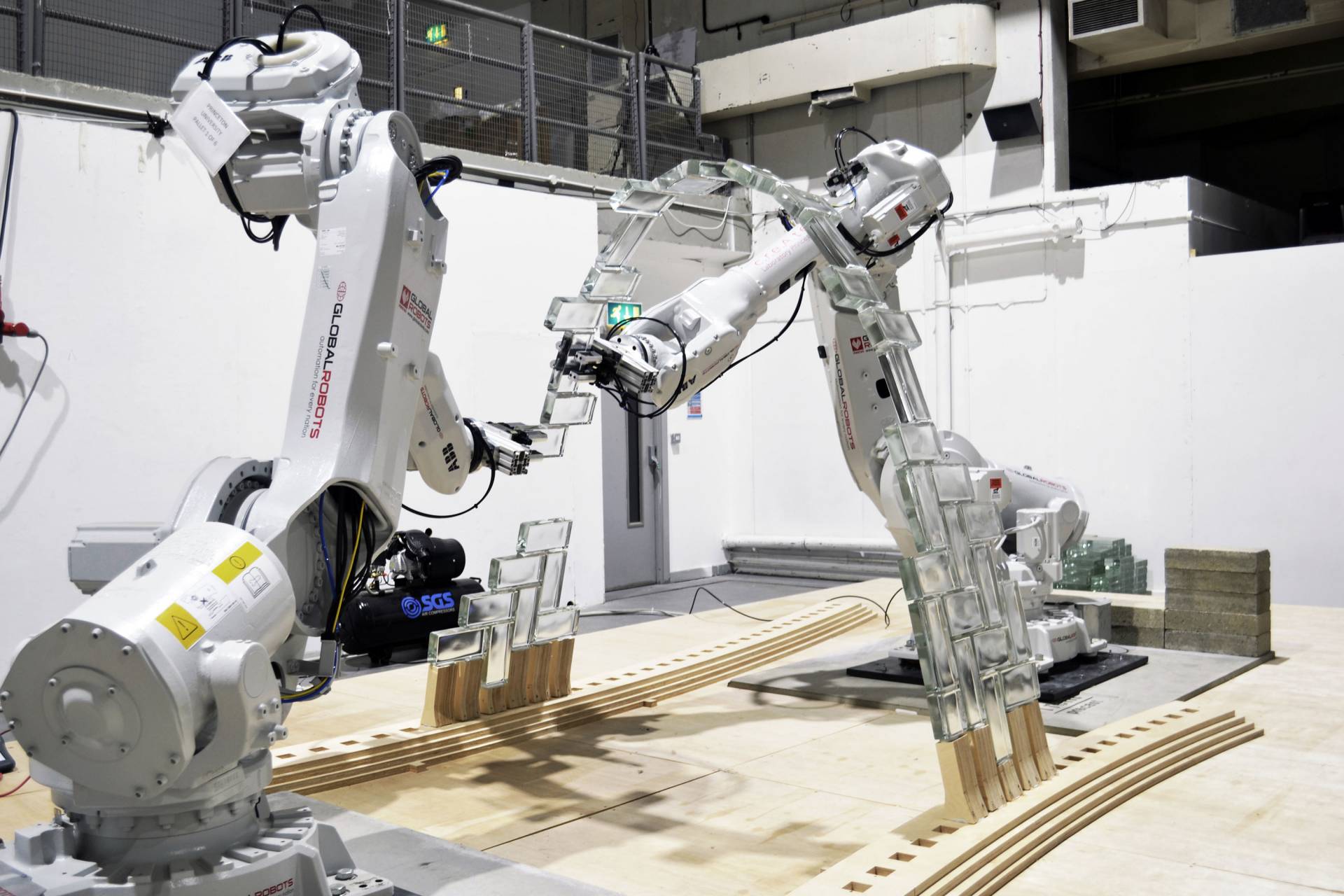 The nearly finished central arch awaits its last brick. Like the entire LightVault structure, the central arch is constructed without any scaffolding or other external supports. The two industrial robots take turns placing a brick and supporting the structure, working from one side to the other.

Critically, the LightVault reduced resource use in two ways: eliminating the need for forms or scaffolding during construction, and improving the vault’s structural efficiency by making it doubly curved, which reduced the amount of material required. These were only possible because of the robots’ strength and precision.

“I try to find out what robots can do that humans cannot do well,” said Parascho, an assistant professor of architecture at Princeton who developed the idea behind the robotic assembly of the vault. Parascho is the director of CREATE Laboratory Princeton, where CREATE stands for computation and robotics enabling architectural technologies.

“My work is not trying to replace human labor by automating it, but to increase the possibilities for architecture by using robots for tasks that humans are rather bad at,” she said. “For example, holding a 3 kilogram [7 pound] brick for seven minutes — without moving, to allow the glue to dry — is very hard for humans to do.”

“Robotic construction opens up a number of design and building opportunities where robots complement human work,” said Alessandro Beghini, an associate director and senior structural engineer at SOM, who collaborated on the LightVault. “Robots could be leveraged in places where it would be dangerous for people to work or where access to humans is difficult.” 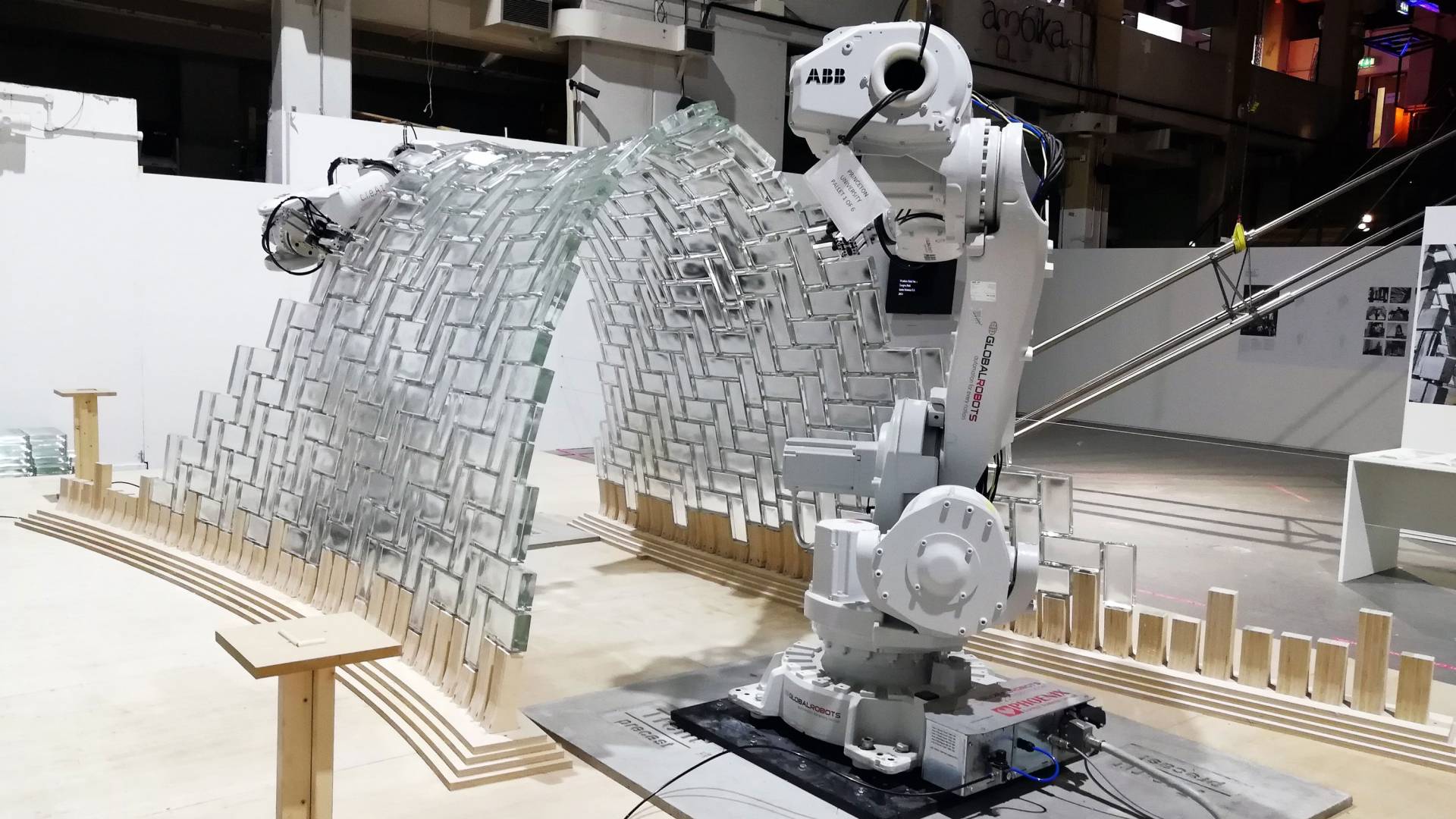 The final, full-scale glass LightVault is displayed at the "Anatomy of Structure: The Future of Art & Architecture" exhibition in London.

Robots are inherently good at executing precise movements in space, unlike humans, who need guides or support structures to construct complex geometries. This is what inspired the researchers to explore the potential of striking and unexpected shapes. Edvard Bruun, a Ph.D. student in civil and environmental engineering, worked on the implementation of the project.

He noted that while human builders would need to double- and triple-check their placement of the blocks, “by leveraging the inherent precision of the robots in navigating 3D space, we could spend more time focusing on making the design as efficient as possible, while not getting bogged down in the physical construction challenges typically associated with such a structure.”

The team devised a process in which the two robots worked together to assemble the central arch of the vault without any scaffolding or other support. Each robot would place one brick, then hold the structure while the other robot placed the next brick. 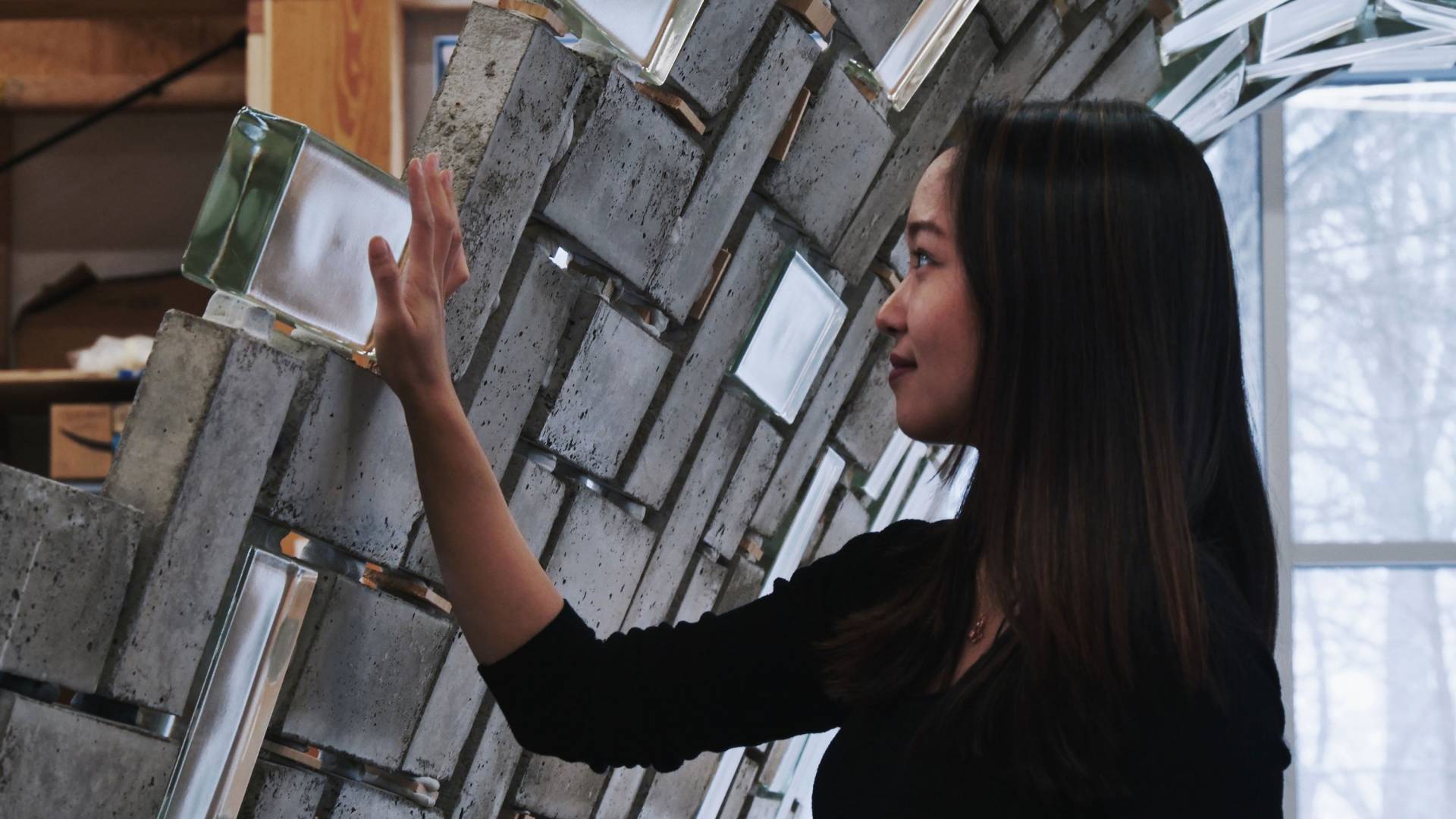 Isla Xi Han, a Ph.D. student in architecture technology who worked on developing the LightVault prototypes, looks at the concrete-and-glass prototype at Princeton’s ECL.

“Beauty and material or structural efficiency are not mutually exclusive,” said Bruun. “Construction is energy and material intensive. Future global well-being depends on being able to build strong buildings that are efficient with how much material they are built with. Robots have the potential to help us achieve this goal as we develop better ways to utilize them in construction work.”

Isla Xi Han, a Ph.D. student in Parascho’s lab, was responsible for developing and implementing the robotic fabrication process.

“To describe LightVault, I tend to do a mini dance,” she said. “A traditional way to build an arch is two hands coming from opposite ends and meeting in the top middle. Meanwhile, two robotic arms making an arch are rolling hands sweeping from left to right.”

After the robots finished constructing the central arch together, they switched to working independently, each building one side of the vault. To ensure the stability of the unfinished structure, the bricks were placed such that each newly placed brick would support the next one. 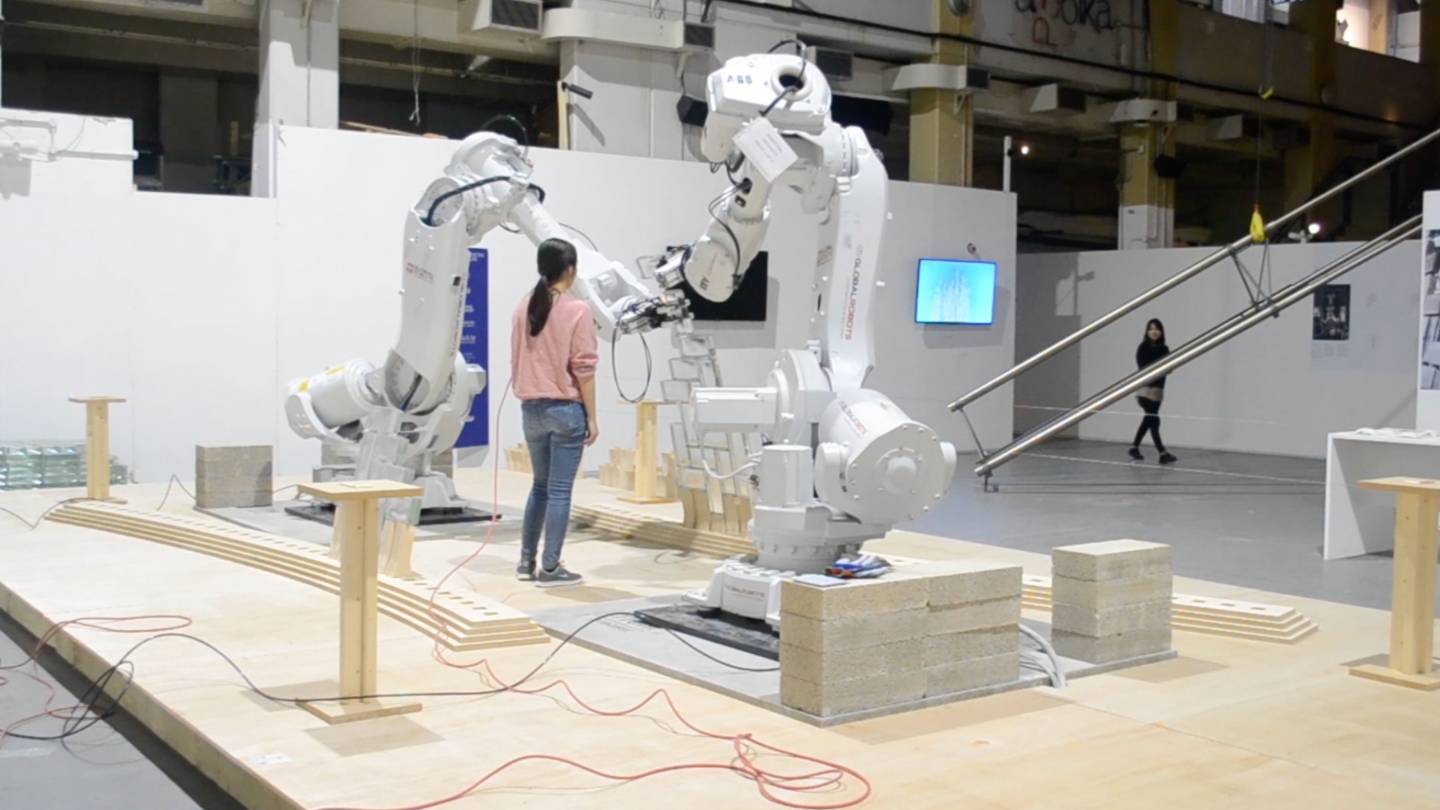 Professors Stefana Parascho and Sigrid Adriaenssens partnered with Skidmore, Owings and Merrill (SOM) to design the LightVault, which was built by two industrial robots from the U.K.-based Global Robots. The final structure was 7 feet tall, 12 feet wide and 21 feet long, constructed of 338 transparent bricks from Poesia Glass Studio.

While the team's intention was clear from the beginning, the implementation was not as straightforward.

To build the vault in time for the London display, the team tested each decision with physical prototypes, from small-scale proof-of-concept ones to full-scale mock-ups. A total of eight structures were built — some in the Embodied Computation Lab in Princeton’s School of Architecture, some at Global Robots, and one at the exhibition space in London.

Challenges included finding a connection system that would safely hold the glass bricks in place once assembled, identifying the right construction sequence to ensure the structural integrity of the vault, and controlling the unpredictable movements of the robotic arms so that they would not collide with each other or with completed sections of the structure.

“I learned to respect the robots’ ‘personalities’ rather than just telling the poor robots to do things,” said Han. “At one point, the robot's elbow was constantly hitting part of the existing structure. We ended up taking a step back in the intended design — and equally a step forward in human-robot collaboration — to massage the structure into an asymmetrical shape, to help the robots move more comfortably throughout the construction process. Both parties are happy — it's a win-win.”

Even with so many tests and efforts to predict everything that could go wrong, the team encountered surprises. “The air compressor we bought for the London installation was not strong enough,” said Samantha Walker, a senior structural engineer at SOM. “We ended up sourcing a different, more powerful one at the last minute. You can spend so much time focusing on resolving the complex issues and, in the end, it's the seemingly obvious ones that can cause the biggest problems.” 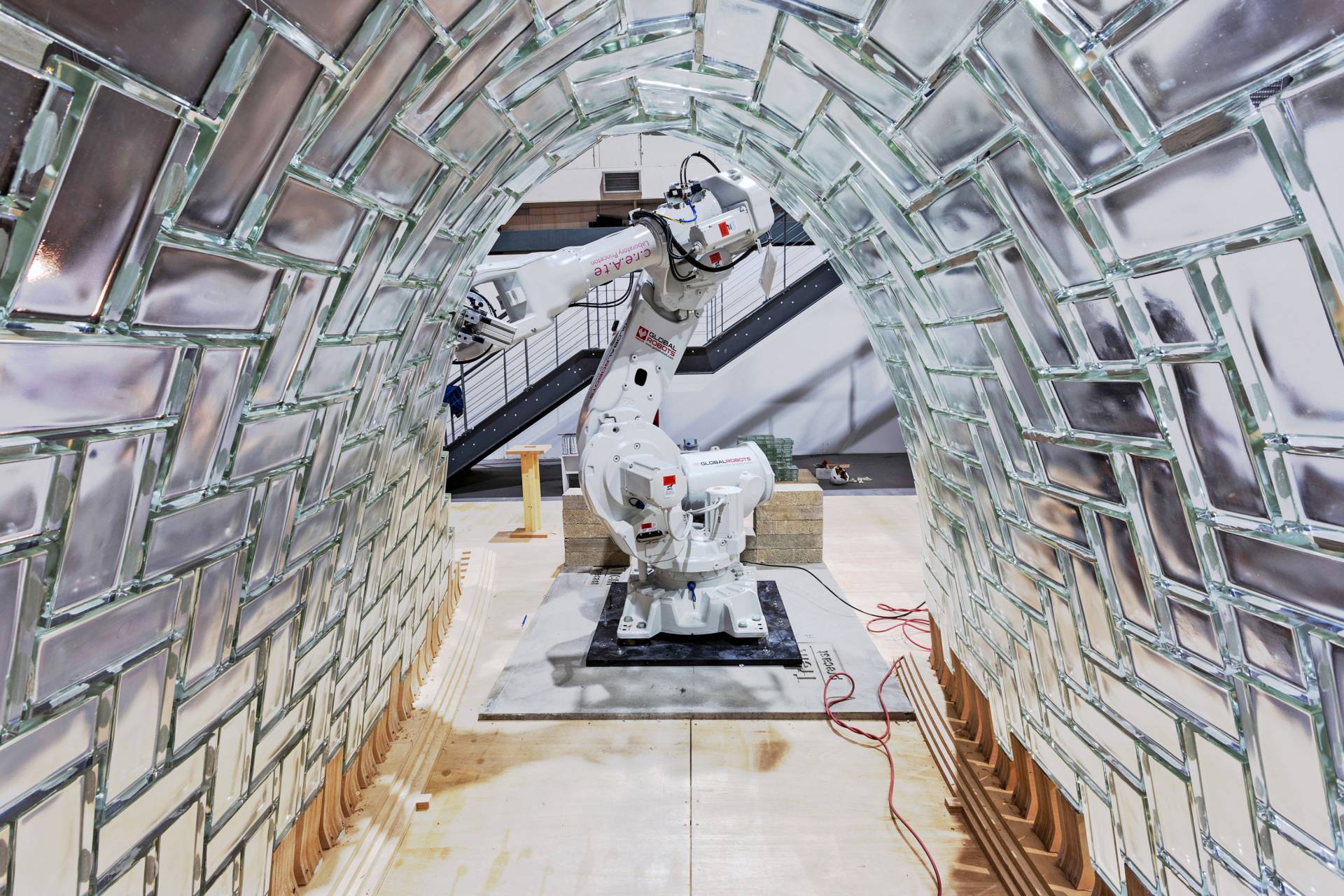 One of the construction robots is seen through the double-curved LightVault structure at Ambika P3 Gallery, London.

Another time, after successful prototypes with lighter-weight materials, two tests using the glass bricks “ended in shattered glass all over the lab,” said Parascho. Careful analysis revealed that the robots themselves were deforming a few inches under the weight of the arch. “This made us rethink the entire construction sequence, in order to limit the maximum weight that the robots had to hold,” she said.

But the largest challenge was posed by COVID-19. With half the team in London and half stuck back home, construction needed to speed up and be completed in half of the initially planned time. This meant quickly adjusting the design to decrease the number of bricks and coming up with a schedule that would allow for a fast and efficient construction. "In the end, the success of finalizing the vault was topped by the relief of everyone returning home safely," said Parascho.

While the pandemic has impacted the project dramatically — the opening event with over 600 expected guests was cancelled, and the complete team never met in person — “this experience has opened up new and unexpected opportunities,” said Parascho. “The challenges for our field are huge, ranging from how to safely work in a robotics lab to how to run research remotely and finding ways to connect to researchers and other academics. But the current state has also shifted our focus online, which allows and encourages researchers from all over the world to connect more quickly and easily.”

There was one silver lining, Bruun said. “We showed that robots are viable tools to work with in a situation where social distancing is an important consideration.” The CREATE Lab is currently working on establishing a remote setup to allow students and researchers to control the robots from home and continue their research through the pandemic.

“It has become clear how relevant robots are in today’s world,” said Parascho, “and how they could help in such crises in the future.”

Senior thesis: Self-folding structure could slash energy use in buildings