Senior thesis: Self-folding structure could slash energy use in buildings 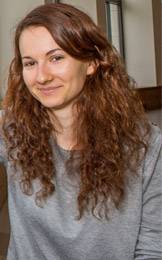 Denisa Buzatu, a civil and environmental engineering major, devoted her senior thesis to developing a moving façade to improve the energy efficiency of buildings. The structure, which she created as a small working model, adapts its shape in response to electrical signals allowing it to shade the building when most needed.

Princeton student Denisa Buzatu's vision for an environmentally sustainable building is a sort of shape-shifting origami façade. For her senior thesis, Buzatu, a civil and environmental engineering major, is designing and prototyping a structure that shades the façade of a building by folding and adapting its shape in response to sunlight.

Her design takes advantage of a type of wire that contracts when current is applied to it and yet "remembers" and returns to its original shape. These wires make up the edges of eight triangular faces, which are combined to form a seamless surface, and can be activated individually or in combination by a microcontroller to fold the surface in myriad ways.

"It's like electrical origami," said Buzatu. While the overall shape of the structure is immensely flexible, the individual surfaces are rigid and can be composed of any material, such as acrylic or solar panels.

For example the surface could integrate solar panels as well as integrated sensors that monitor the amount of sunlight hitting the building. The modules could flatten automatically during sunny periods to simultaneously collect energy and shade the building, then use part of the collected energy to fold away when cloudy. 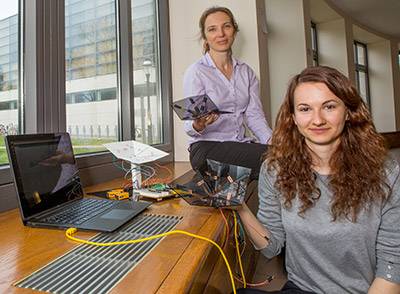 Buzatu worked with Sigrid Adriaenssens (rear), assistant professor of civil and environmental engineering, who specializes in the relationship of form and efficiency in structures, with a particular emphasis on sustainability. In her thesis work, Buzatu developed several models, including the first one made of paper followed by versions made of acrylic plastic (held by Adriaenssens and Buzatu). Buzatu used Princeton University's Friend Center (in background) as a case study of a building that could be engineered to have reduced energy needs through the use of a such a structure.

Buzatu, who is from Slatina, Romania, is completing the architecture and engineering structures track of her major and plans to pursue a graduate degree at Yale School of Architecture. She is a member of the Princeton chapter of the American Society of Civil Engineering and served as the group's social chair for the past two years. She also spent two summers studying and researching in France.

Buzatu said her goal for her thesis was to design a structure that was architecturally pleasing while also practical from a structural and environmental point of view. "It was very important for me to have a senior thesis that uses as much of the analytic skills I learned in my engineering classes as it uses my design and creativity skills," she said. "That's what gets me excited."

Buzatu started investigating adaptive structures during an internship through the Andlinger Center for Energy and the Environment the summer after her sophomore year, when she discovered that the Friend Center could save about 43 percent on heating and cooling expenses if it took advantage of an adaptive architecture. If integrated into buildings as they are being designed, such technology has the potential to cut the energy consumption of buildings in half, she said. Buildings account for about 40 percent of all energy usage in the United States, including 75 percent of electricity use. However, most current designs of adaptive architecture rely on intricate mechanical systems to accomplish shape-shifting, and this can be difficult to build and costly to maintain.

Instead, Buzatu's approach of combining folding faces and a microcontroller is sustainable and energy-efficient.

"Denisa's work is very creative, societally relevant and totally her own," said Sigrid Adriaenssens, an assistant professor of civil and environmental engineering who advised Buzatu on her project. "Within the open-ended senior thesis project, Denisa immediately took charge to formulate an interesting research question, and developed a realistic research plan which she is implementing with great success."

Adriaenssens, whose work focuses on the relationship of form and efficiency in structures, added, "The choice of topic and her approach to the problem has already stirred great interest among my colleagues as well as faculty in electrical engineering."

Buzatu created a model of a self-adapting structure that ultimately could be used to improve the energy efficiency of buildings.  The panels are joined by wires that deform and return to their original shape in response to electrical inputs, allowing the structure to offer shade and light at optimal times. (Video courtesy of Denisa Buzatu, Class of 2015; note there is no audio track with the video clip)

Buzatu's work includes mathematical modeling and simulation as well as physical models. Because the behavior of the metal alloy wires is difficult to model, she also focuses on building and analyzing hardware implementations. Her first prototype involved embedding the metal alloy wires into paper and manipulating them with a microcontroller. By pressing buttons connected to different edges, she was able to fold the paper into different shapes. From there, she was able to more fully automate the process by sending a set amount of current through transistors, which were faster and provided a much more regulated response than buttons.

Buzatu also looked at surfaces with different numbers of faces and discovered that scaling up the size of the structure is not as simple as it might seem, as the added weight of more faces introduces another set of limitations for the design. Still, she was able to successfully implement an eight-faced surface that matched her numerical simulations and holds promise for the future of adaptive structures.

"I had to fail many times," joked Buzatu, who started the project without much experience in robotics. "But I'm okay with the word 'failure.'"

Her multidisciplinary background and openness to picking up new skills allowed her to experiment with a variety of designs and ideas. Buzatu admits that taking such an open-ended approach made it difficult to decide how to focus her thesis. Still, she said, studying topics that are not obviously useful and finding a way to make them relevant was her key mindset to approaching her thesis.

Her focus on the unconventional also caught the attention of Adriaenssens.

"Denisa's drive, out-of-the-box thinking and abilities clearly demonstrate her potential for being a creative and influential designer," Adriaenssens said. 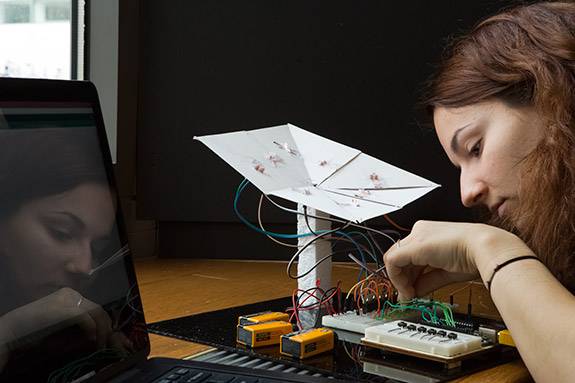 Buzatu said it was challenging to scale up her system, but she successfully created a model with eight panels that move and fold in response to electrical signals. "I had to fail many times," she said.